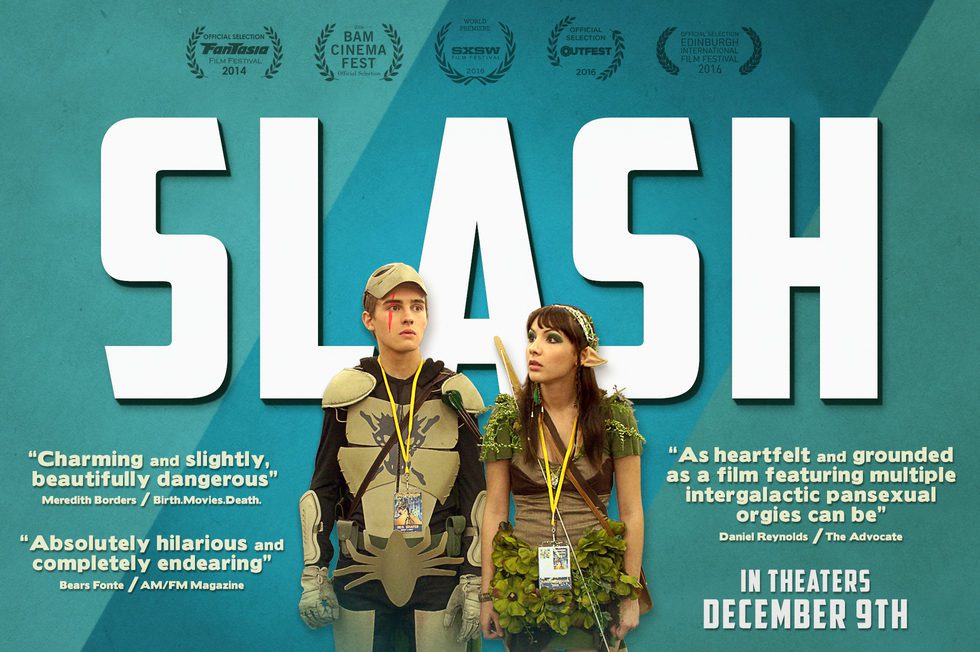 I got my start in fandom at a young age, as my mom took me with her to science fiction conventions starting in the early ‘80s – she’d been a Star Trek fan for years by then and edited one of the earliest fanzines devoted to the show, so bringing me to cons was a way of introducing me to her community.  I started going to comic book and movie conventions on my own in my teen years, and while the specific media on which the things we loved were different, the reason for gathering was the same.  Fandom was a way for those of us whose immediate day-to-day social network didn’t share our passions to gather with people with similar loves and know that our nerdy obsessions with whatever it was – Heroes in tights fighting crime, Douglas Adams novels, or the works of Doris Wishman – was a perfectly acceptable thing to love.  For the less-outgoing folk who were more introverted partially because it seemed like “nerdy” fandom was the object of ridicule, having a fan culture gave us a sense of belonging to a group, a feeling that was often tough to come by in our everyday lives.

Fandom has grown exponentially in the intervening 30+ years, evolving in the eyes of popular culture from being ridiculed by William Shatner (one of the main beneficiaries of early fandom) on Saturday Night Live to inspiring countless television shows and movies based around the unabashed love for certain media franchises and ideas.  Fandom isn’t the bullied kid on the playground anymore – the nerds have won and pop culture now bows to their whims.

With this growth, however, the sense of community within fandom has changed.  Now that comic book movies make hundreds of millions of dollars every month and The Big Bang Theory is a top-rated television show, it’s not enough to just be a general fan of some particular media type in order to feel the same sense of belonging that you once could.  As time has progressed and the fandom tent has gotten larger, smaller and smaller online tents with more specific fandoms have cropped up to fill the void of a fandom of a more manageable size – a size that allows its community members to know each other, even tangentially, rather than simply be a fan of some medium or genre.  Sure, you can be a horror movie fan, but that designation has become so widespread that it’s basically meaningless.  A fan of, say, Hammer Horror, however, can find a community of like-minded people online with whom to bond.  (Or get into pointless fights with, ending in a message board or social media group banning.  Whichever.) 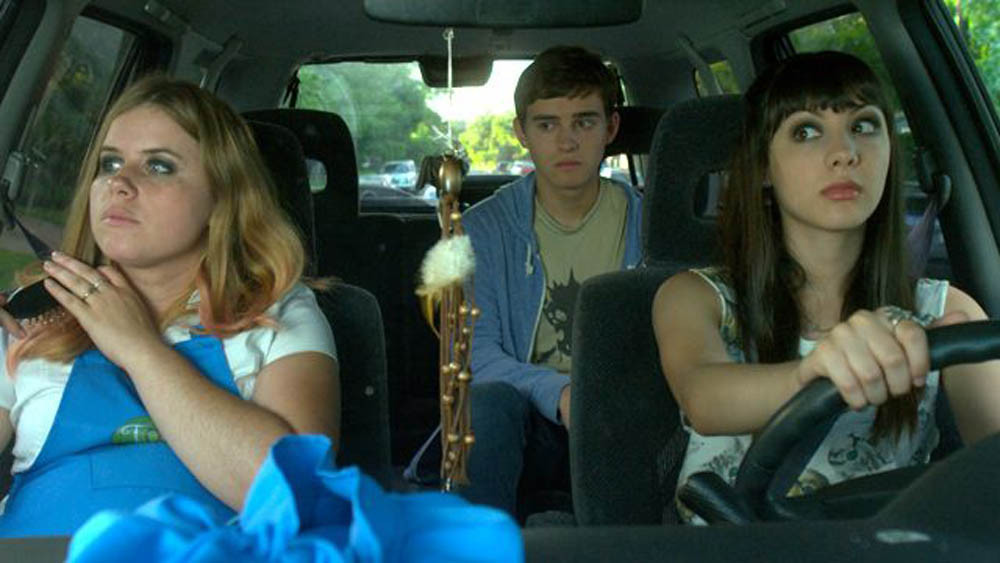 That sense of fandom-as-belonging stands at the center of SLASH, a new film from Clay Liford, the director of the 2010 sci-fi sleeper EARTHLING.  While many films over the past several years have centered around the world of fandom wither explicitly (KNIGHTS OF BADASSDOM) or tangentially (PAUL, TED 2), SLASH is a rare narrative film that explores the importance of fandom and inclusion from a dramatic standpoint, rather than just using fandom as a source for knowing jokes or references.  The results are a sweet, surprisingly nuanced coming-of-age story that deals with complicated sexuality, online deception, and the fear of not fitting in in a genuinely unique way.

Teen Wolf’s Michael Johnston stars as Neil, a 15-year-old introverted high school kid who’s been secretly writing his own fan fiction based on “Vanguard,” a popular sci-fi/fantasy book series.  Being a writer of fanfic would already rank him among the more nerd-inclined members of his school, but Neil’s tales are slash, depicting explicit sexual trysts of the lead male characters in the series, depicted within the film as a campy sci-fi film.  When his notebook of phallic fiction is discovered by classmates, he sinks more deeply into his introversion as his classmates dismiss his fan inclinations as weird.  The exception is Julia, a surly young woman a year ahead of Neil, played by Hannah Marks.  Julia, an active participant in an online slash fiction community, encourages Neil’s creative side, and the growing relationship between the two of them marks the film’s central focal point. 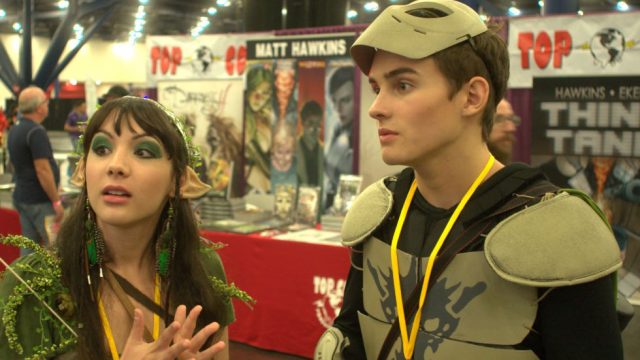 One could easily imagine SLASH as a relatively standard coming-of-age romantic comedy/drama that merely utilizes the slash fiction fandom component as a jumping-off point – a tactic to get the two characters together that’s easily dismissed.   Fortunately, writer/director Liford has more depth in mind, making the nature of fandom central to the story, and emphasizing the communal nature of feeling like a part of a group, not only in terms of specific sub-fandoms, but sexual identity as well.  Liford both understands the importance of slash fiction fandom as a societal function for the main characters and still appreciates the absurdity of some of its components.  In addition, while the plotting suggests scenes that could easily have ended up as clichés (the online chat with a stranger that becomes predatory at the drop of a hat, a finale that could produce an overbearingly inspirational speech), these scenes instead veer away from the easy answers thanks to scripting that understands the emotions and realities at play.

There’s no doubt that Liford comes from a fandom background, and this is clearly a labor of love, resulting in a solid eye for detail that comes across in both the awkwardness of the performances and the situations themselves.  (“Vanguard” has recently been turned into a film series starring an actor that doesn’t match Neil’s vision of the character – in proper fandom fashion, he complains about it, but has seen the film multiple times.) In fact, SLASH almost errs on the side of having so much to say about fandom that you can almost tell when it’s struggling to not be distracted – however, as there are so few narrative films about the culture that are genuinely concerned with character development, you can’t help but admire it for trying.  (An early scene in which Neil is reluctant to upload his work to a slash site not due to shame for what it is, but out of fear as to how the vast, faceless specter of the internet will judge it, is something with which anyone who’s ever written for a site can identify.)

The performances are fantastic, with Johnston epitomizing the uncomfortable-in-his-own-skin teenager and Marks as a more confident, but still unsure, version of the same.  Michael Ian Black, normally known for straightforward comedy, is terrifically restrained in nuanced role that could easily have become a one-note character.  Missi Pyle, Matt Peters and Robert Longstreet are solid in smaller roles that are, to the film’s credit, never nonentities. Sarah Ramos, as Neil’s older sister, memorably steals every moment she’s in, but never takes away from the scenes themselves.

I always hesitate to call a film “charming,” as I feel it’s a word that tends to leave fandom-related audiences cringing and running away in search of something with more explosions, but SLASH is just that.  It’s THE PERKS OF BEING A WALLFLOWER for the fandom set in the most complimentary of ways, and I genuinely hope it finds an audience.  As fandom has gotten large enough to encompass so many sub-fandoms for those with obsessions to find their own comfortable communities in which to be accepted, I can only hope that it’s large enough to appreciate a sweet, clever, funny film about complex characters whose similar nerdy loves are a huge part of what makes them so complex.