Oh, vanity. It gets the better of us some days, doesn’t it? And yet here we are… It’s kind of funny what a woman will do in order to achieve a favored ideal, and we’ve been using bugs to get there for years. In Ancient Egypt women who were celebrated fellatrixes would stain their lips red with the crushed carmine beetle to advertise the fact. We pull the silk out of the asses of dozens of silk worms in order to make lingerie that hugs our curves and fits in interesting places on our bodies. And sometimes we use the venom of bees and their properties of Melittin, Apamin, Adolapin, and Phospholipase A2 to keep ourselves looking young. But like the Octomom and others who have been addicted to altering their appearance, there’s something to be said for everything in moderation.

Including moderation, otherwise this would be a very boring film. 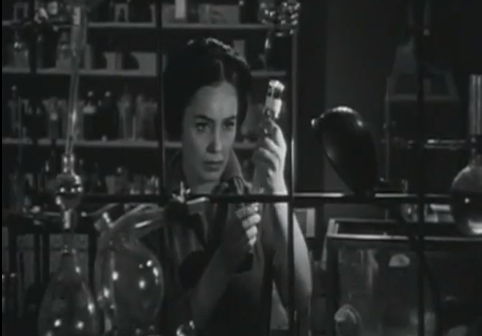 The film in question is THE WASP WOMAN. Susan Cabot is Janice Starlin, the head of a mega-corperation that specializes in cosmetics. Sales begin to suffer when the client base sees that Starlin is aging. Not one to just hire Susan Sarandon or Andie McDowell back in those days, she promptly gets research scientist Eric Zinthrop to help her develop the key to reversing the aging process using royal jelly and enzymes extracted from the queen’s bee-hind.

The reason we don’t self-administer these things is that sometimes it’s hard to judge where the line in the sand is. If some ladies would self-medicate with their lip injections, they might look like an unfortunate baboon’s ass. Sadly, the same is true with Ms. Starlin. Sneaking into the lab after hours and self-administering the enzymes to herself, she goes through a series of very odd insect changes. Most of her humanity gets lost in the shuffle with her attacking people with mouths full of chocolate-syrup blood before getting a face full of acid. 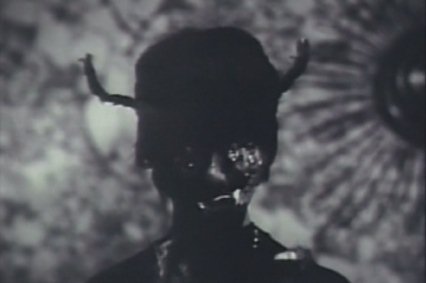 Interesting note from the dungeon:

Despite the original poster which depicts Ms. Starlin with a beautiful woman’s head and wasp’s body, in the film she had a woman’s body, and a horrible insect creature’s visage. I guess the art and props department got their wires crossed on that one. (‘d have been put off if I’d wanted to watch Splash and it was about a fish with legs, but I digress.)

The death of Susan Cabot is just as bizarre as the story of the film. She was bludgeoned to death in 1986 by her son, Timothy Scott Roman, who claimed that it had been “a tall Latino with curly hair, dressed like a Japanese Ninja warrior”. It turns out Timothy had been treated for 15 years with an experimental growth hormone that cause neurological problems… Little on the nose, don’t you think?

So it goes to say that it’s a smart move from time to time to remember: less is more, don’t trust crazy mama’s boys, and before making out with someone, make sure they aren’t allergic to bee venom. It puts a damper on your dates having to visit a hospital for anaphylactic shock… 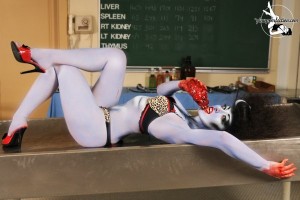