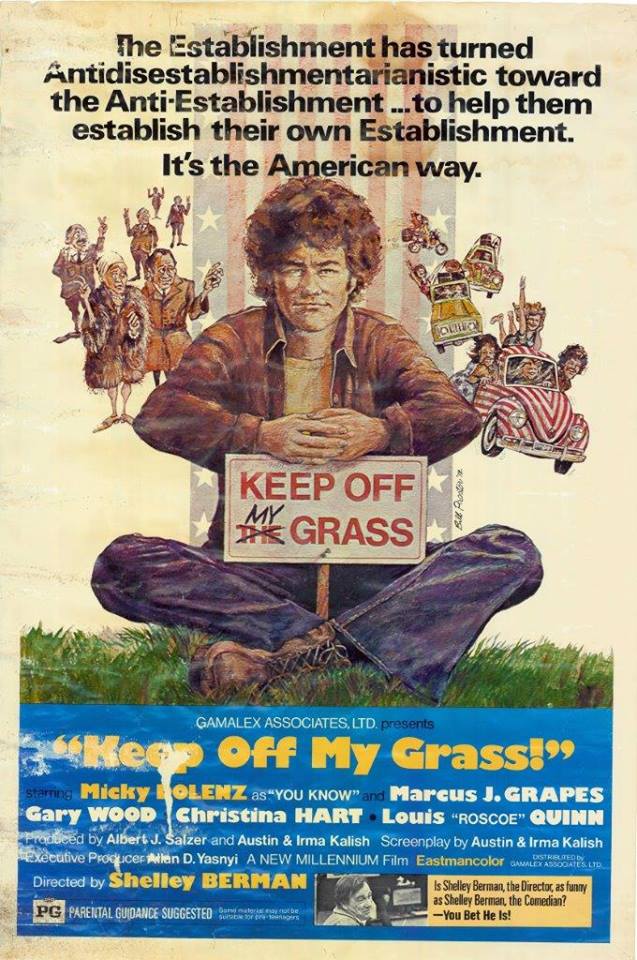 As a lifelong cult film aficionado (and a collector of Steve Puchalski’s mandatory cult film mag “Shock Cinema”), I’ve got a fairly long list of movies that I’m determined to find.  Movies such as 1985’s pro-wrestling sci-fi horror pic BLOOD CIRCUS.  Or THE MILKY LIFE, starring Mickey Rooney as a grown man who acts like an infant.  Or 1974’s THE GODMOTHER, starring Mickey Rooney as a mobster in a tale of cabbage, drag, and kimonos directed by DEATH CURSE OF TARTU’s William Grefe.  Or the 1989 adventure pic THE SECRET OF THE ICE CAVE, which features no Mickey Rooney presence whatsoever.

These aren’t movies I’m determined to see, mind you – they’re bound to be disappointments, so my desire to actually sit through them is relatively measured.  But they’re movies that, due to lack of distribution even on the shady alleys of the grey market movie circuit, I can’t see.  It makes them all the more alluring by their total lack of availability, to the point where I’m much more interested in finding them than watching a genuine classic that hasn’t yet graced my eyeballs.  It doesn’t matter that THE SEVEN SAMURAI, MARATHON MAN,THE DAMNED, or SWIMFAN are just a few button-clicks away thanks to streaming services.  I want to see Morgan Freeman in WHO SAYS I CAN’T RIDE A RAINBOW! and I want it now!

For years, one of the films that ranked highly on this imaginary list was KEEP OFF MY GRASS!, a film I first noticed while stumbling across its IMDb entry, searching for films starring members of The Monkees.  (I had a lot of time to kill in the 2000s.)  Mickey Dolenz, the group’s most commonly-used lead vocalist, was the star of the 1975 film, which seemed to be some kind of hippie stoner comedy.  To add to the mystery, the film was directed by Shelley Berman, a popular stand-up comedian in the Bob Newhart/Pat Paulson deadpan mold whom I’d grown up listening to, thanks to my Dad’s similarly deadpan comedy tastes.  I couldn’t reconcile the existence of the film – how the heck did Berman, a low-key, very funny, establishment comedian end up getting his sole directorial credit on an obscure stoner movie starring a Monkee? 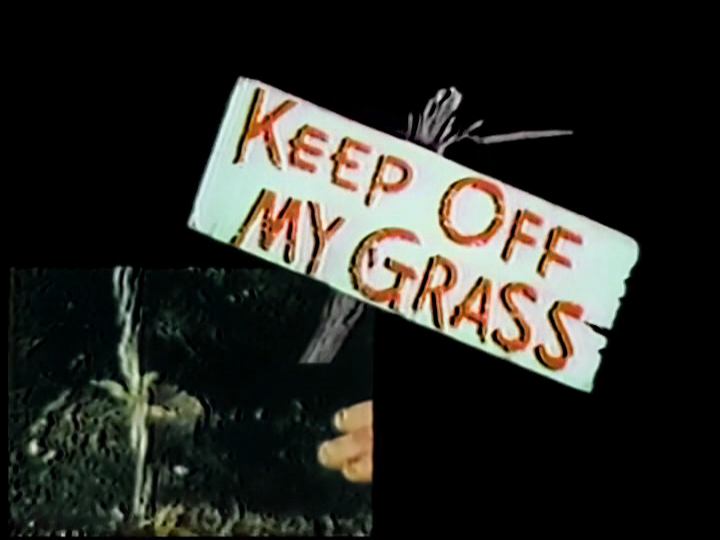 A 2010 write-up by Temple of Schlock added to the mystery, reprinting a synopsis and review and providing some historical advertising.  Even with the proof of its release right before me, I still couldn’t quite grasp that this odd little film even existed.  There was no sign of any sort of official release, and even the gray market was dry – and considering the number of bootleg Monkees videos out there, this was especially mysterious.

It turns out I wasn’t the only one.  English broadcaster (and Monkees fan) Iain Lee was similarly fascinated by the film, and unlike my technique of staring blankly at a screen and hoping someone else actually did something about it, Lee started digging for the movie, eventually finding a copy thanks to a random encounter.  Fortunately, Lee didn’t just keep the goods to himself, and arranged to release the film on DVD as a full-fledged special edition, thus allowing me to finally cross off one of my most-wanted titles from my list of “must-finds.” 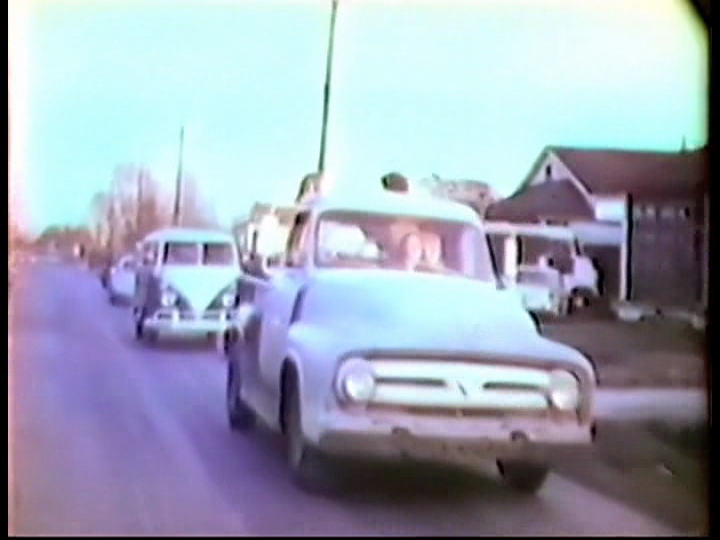 Of course, KEEP OFF MY GRASS! couldn’t even come close to living up to the images I’d had for the film in my head.  Marketed as a zany comedy (the trailer is included on the DVD, and includes virtually all of the funny lines of the film), KEEP OFF MY GRASS! is a definite product of the hippie culture, a relatively freeform story with an ensemble cast that starts out with the potential for “hippies vs. establishment” conflict, becomes a low-key drama and ends up with a surprisingly dark turn.

Dolenz plays You Know, part of a gaggle of layabouts in New Orleans whose presence is irritating the local shopkeepers.  The shopkeepers are concerned that the filthy hippies on the street are keeping customers away, so they purchase an abandoned town called Riverway and convince the group that they should do their own thing there, far, far away from where they can prevent capitalism from taking its course.  On the way, they pick up hitchhiker Twila, who’s actually on her way to Michigan but, as she states, “I’m not a fanatic about it.” 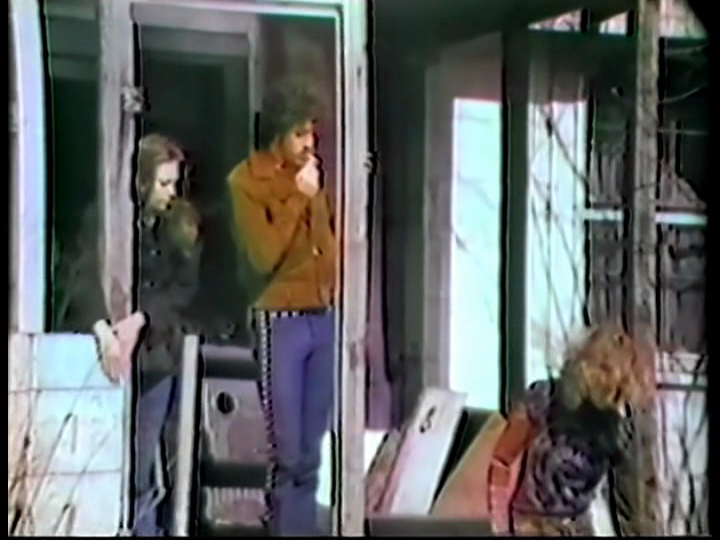 The group settles in to their newfound commune, and the relocation changes the relationships between several of the group’s members.  Relations between the ostensible leader, Jerry, and his girlfriend begin to sour.  The lead shopkeeper’s son David (“Simon and Simon”’s Gerald McRaney!) meets up with the group in order to proclaim his love to one of the members, but isn’t truly accepted until he takes off his shoes.  You Know runs around trying to get laid, and the local townspeople aren’t too keen on having a commune in their midst, with the exception of the sexually adventurous Rita. 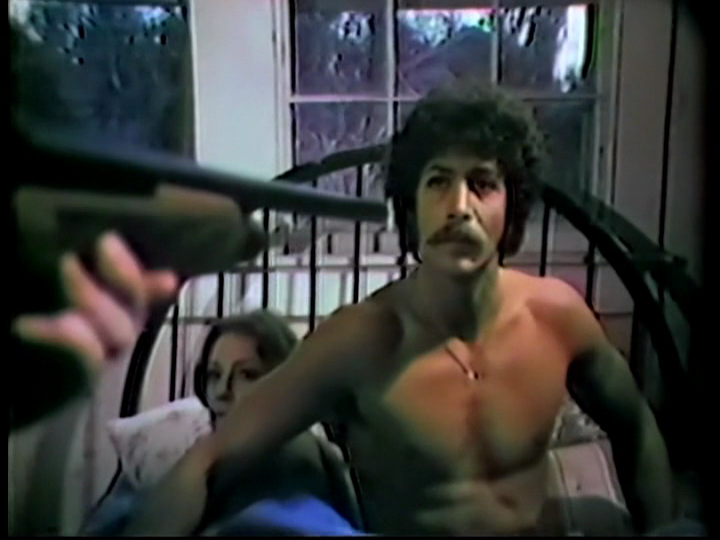 Worst of all, the realities of having a money-free existence start to set in, and the group find themselves each creating jobs for themselves in order to set up a system of finance.  Will capitalism end up overcoming the ideals of the hippie culture?  Will Jessica sell any wine?  Will Micky Dolenz get laid? 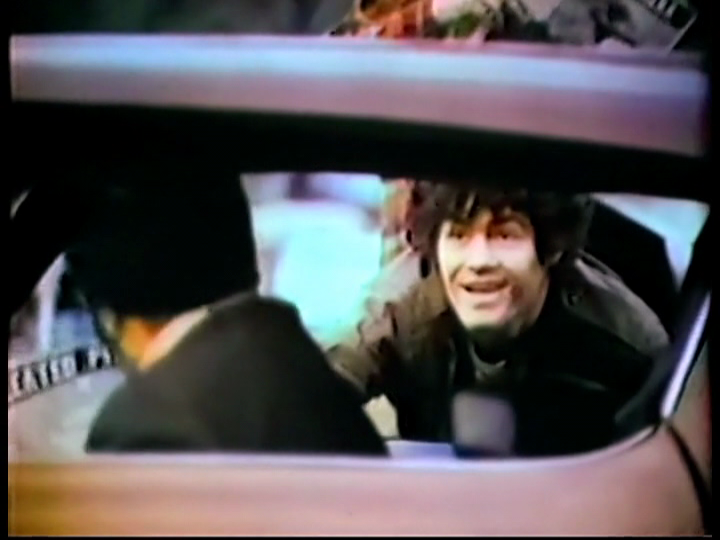 The film never quite establishes a coherent tone for more than a few minutes, wildly cascading between melodrama and satire and climaxing with a bizarre trip sequence that wouldn’t have looked out of place in a horror movie.  The cast is affable, but you can surmise that none of them seem to have been directed as though they were in the same movie, with character interactions working successfully only on an occasional basis.  It mostly doesn’t work as a film, but as a free-form, stream-of-consciousness half-satire about hippie life, it’s pleasing enough, assisted by some decent music created especially for the project.  (None, however, by Dolenz.) 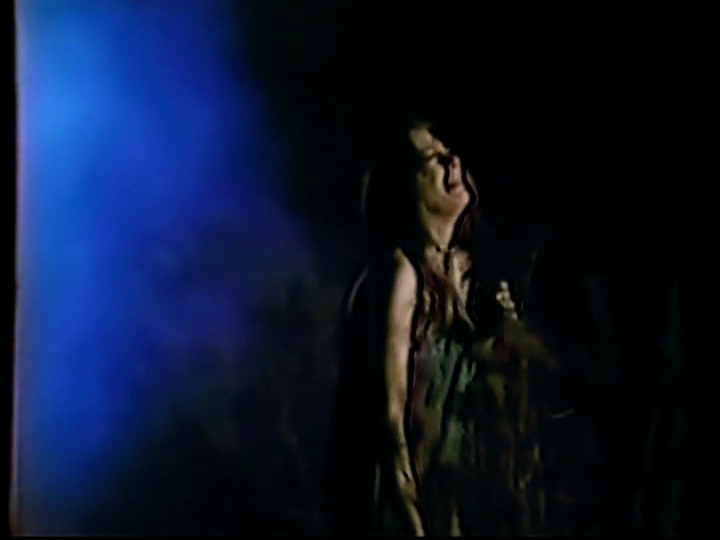 KEEP OFF THE GRASS! is very little like the film the advertisements and trailers for it suggest – Dolenz has about 20 minutes of total screen time, despite his prominent presence in the marketing, and there’s only intermittent comedy.  It’s still, however, a fascinating little part of cinema history, one that sits alongside the works of Joy Houck Jr. (NIGHT OF BLOODY TERROR) in the pantheon of regional exploitation obscurities. (Both Dolenz and McRaney had both worked for Houck, along with cast members Everett Addington, Nita Wilson, and Marcus J. Grapes, so I wouldn’t be surprised if there was some type of Houck connection to be found.) 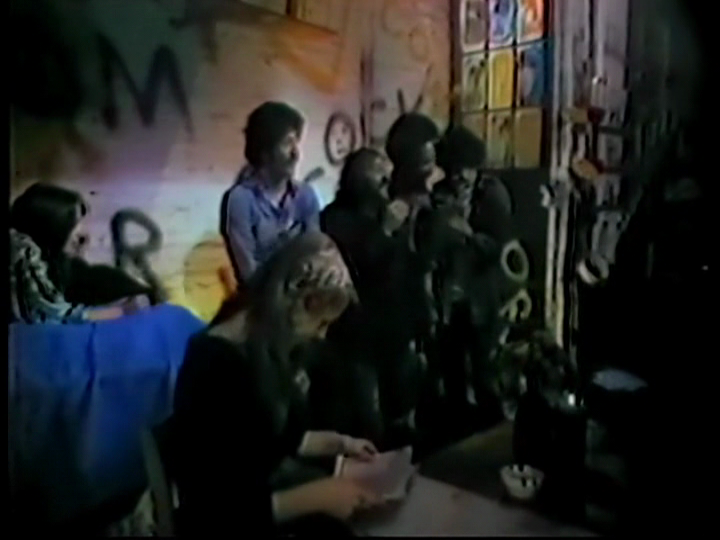 As the film’s elements were only available via an old VHS tape, the film looks far from great.  It’s presented full-frame, and resembles a second-generation bootleg.  However, there has clearly been work to be done, as evidenced by one of the disc’s special features, a comparison of the original source and the “remastered” version, using the trailer as an example.  A brief interview with Grapes, who plays the hippie “Wolfman” in the film, is also included, along with a tongue-in-cheek segment of Iain Lee explaining the story as to how he found the film to be restored. 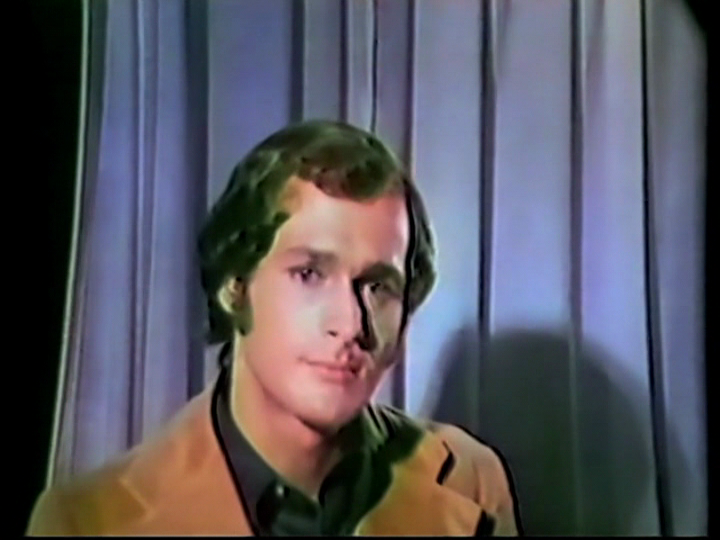 The DVD also comes with an audio commentary by the cast of “Zilch,” a podcast group devoted to the Monkees.   The group seems affable, even if most of the research done for the recording seems to be done via looking up actors on the IMDb.  (They don’t seem to know who Shelley Berman is, though they have much of the same questions that I do about his involvement.)  It feels more like a group of friends talking out the vaguely-defined concepts in the film, which actually works pretty well, as it provides most likely the closest thing you’ll get to convincing other people to watch the movie with you. 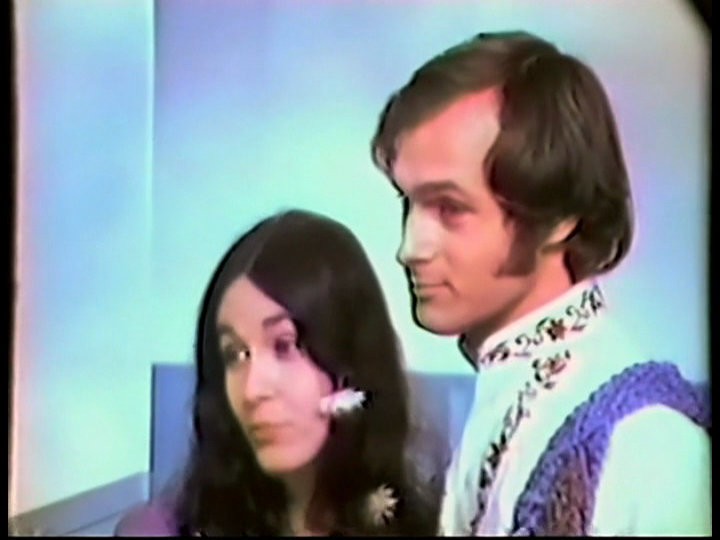 Sadly, neither Dolenz, McRaney or Berman contributed to the release, nor did producer Albert J. Salzer or producer/writers Austin and Irma Kalish, so I’m no closer to understanding what the hell Berman was doing behind the camera or the intentions behind the film in the first place.  Still, I’m very happy that KEEP OFF MY GRASS! finally became available to the public, and fans of counterculture obscurities (or Monkees, for that matter) should eagerly welcome this cinematic oddity into their homes with open arms. 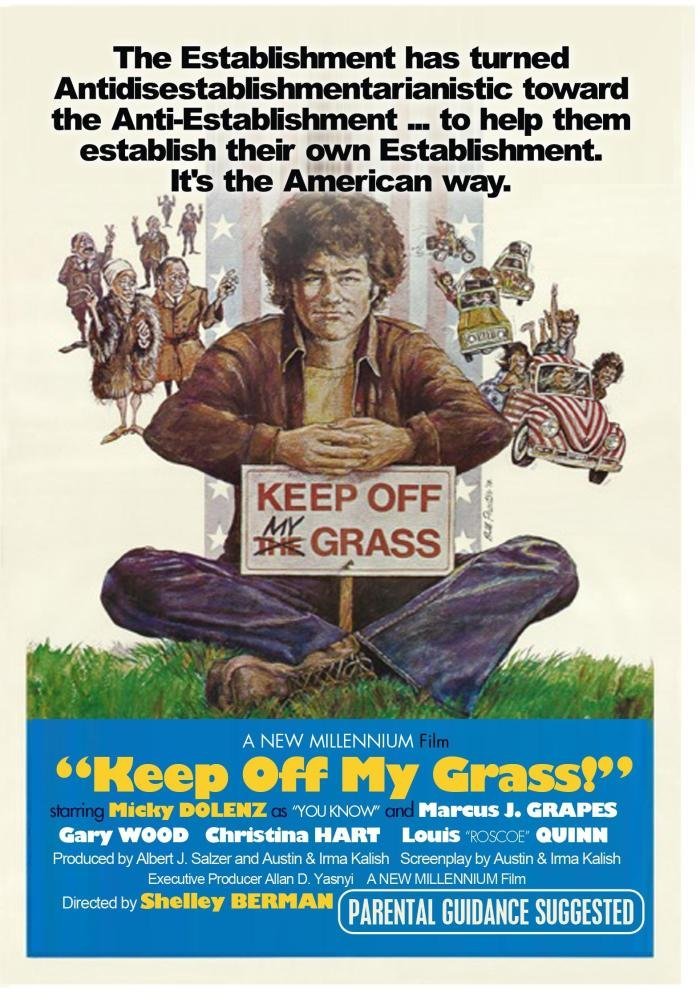 Purchase KEEP OFF THE GRASS! here.