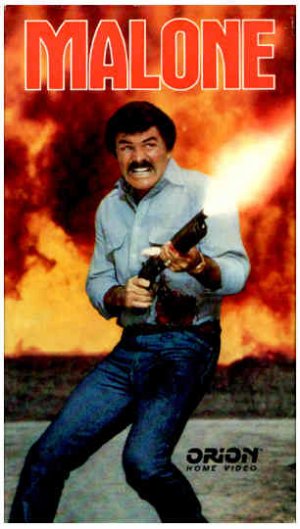 CLICK ON BURT’S ‘STACHE TO BUY THIS GOOD SHIT!

Burt Reynolds plays Malone, an ex-CIA black operative trying to forget his sordid past by holing up in the middle of Smalltown Nowhere, USA. Of course, things don’t go as planned, and Burt soon finds himself up to his mustache in deadly hillbilly drama. The story is nothing original, and the execution is far from flawless, but you could do a lot worse than MALONE. The action is solid, Burt is Burt, and he’s backed by a solid supporting cast including Cliff Robertson, Cynthia Gibb from YOUNGBLOOD, Kenneth McMillan (reprising his role as Baron Harkonnen), Tracey Walter and and Dennis Burkley playing chicken-fried crackers, and Lauren Hutton as The Beaver.

Quick question: Why can’t ex-CIA agents ever be something a little more mundane? They’re either former black ops, a super commando/bionic ninja, or some other type of elite bullshit. Doesn’t the CIA employ people to clean the toilets, too? That *that* would make for some good drama, people.

The director is Harley Cokeliss, the mastermind behind BLACK MOON RISING. Take from that what you will.