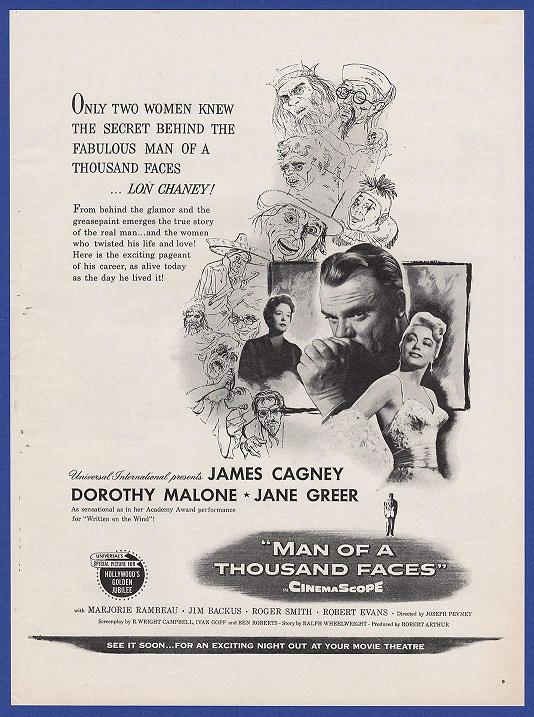 As long as you don’t go into director Joseph Pevney’s 1957 Lon Chaney “biopic” MAN OF A THOUSAND FACES with any real expectation of accuracy, there’s a lot to like. I don’t want to be too hard on the movie for taking liberties. Every biopic has to. There’s only so much time to tell the story. But there’s a lot of liberties taken here. So, if you want to learn about Lon Chaney’s life, this certainly isn’t the place. But if you want to see a mesmerizing performance by James Cagney, a decent story, and competent direction… well, this is a great place to start.

Cleva Creighton Chaney (Dorothy Malone), Lon’s first wife, is meant to be the villain of the story, and it’s true that most of the things she’s depicted as doing were at least sort of based on real life incidents, but boy-oh-boy does the script have absolutely no sympathy for her. Cleva was actually still alive when the film came out, and I honestly hope she didn’t see the movie. It’s really a brutal depiction. 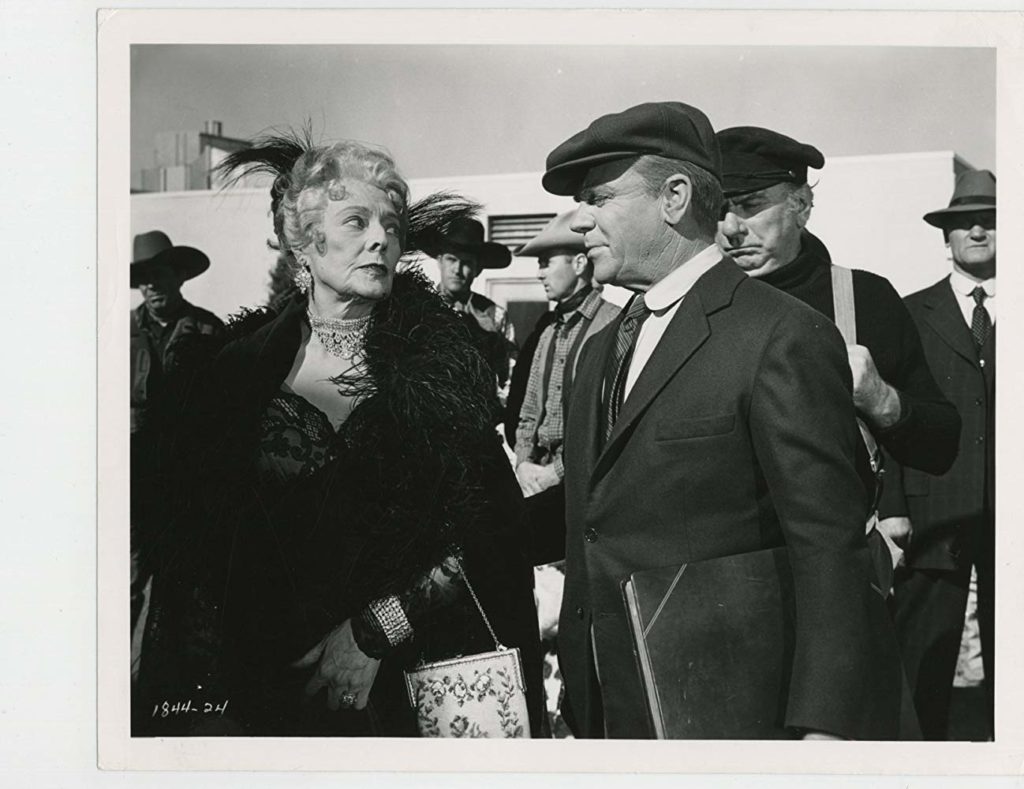 The main source of conflict early on is Cleva’s desire to go back to work as a vaudeville singer after the Chaneys’ only only son, Creighton (better known today as Lon Chaney, Jr.), is born. This being the 1950s, that was out of the question, and the Chaney depicted in MAN OF A THOUSAND FACES believes unwaveringly that a woman’s place is in the home, and refuses to let Cleva go back to work until Creighton is older. This is a weird (though not very surprising, considering the time) dramatic device that was wholly fictional, meant further enforce the idea that Cleva is the villain. In life, Chaney had no objections to his wife working, which she continued to do until her tragic suicide attempt.

Unfortunately, the suicide attempt is true. And it’s also true that Cleva had at least one affair. But, hell, that certainly doesn’t make her a villain, just tragically human like the rest of us. And what’s really unfair about the way she’s depicted in the film is that, of all her supposed sins, it’s the affair that finally drives a despondent Chaney to divorce. According to MAN OF A THOUSAND FACES, there is truly nothing worse than being cuckolded.

Another completely fictional device is the conflict between Creighton and Chaney over whether the actor’s son should change his name to Lon Chaney, Jr. and go into show business. As portrayed in the movie, Chaney does all he can to thwart his son’s ambition (until the inevitable tearful reunion, of course). In reality, Creighton had no such ambitions and only went into the movies (most famously playing the Wolf Man in the 1941 Universal movie of the same name) after his father’s death. The money offers just became too good to pass up. And who can blame the guy? 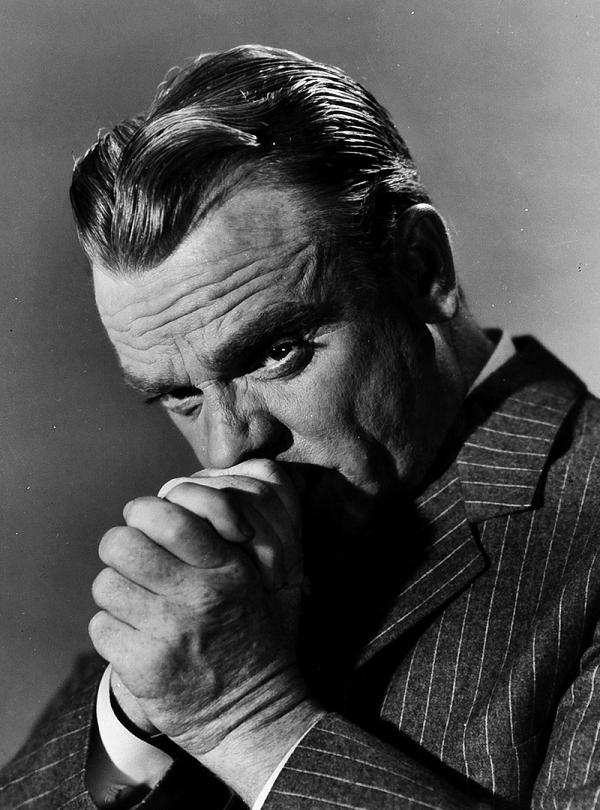 At first, it’s kind of funny to see Cagney playing Lon Chaney. He was ten years older than Chaney was when he died. Yes, he is supposed to be in his early twenties at the beginning of the  movie. Sure, Chaney was a bit of a grizzled character that looked older than his 47 years by the time he died, but this is almost comically overboard. Still, since the film is basically a work of fiction anyway, you really can’t go wrong with Cagney. Which is probably why there’s never any specific dates mentioned in the movie. Chronology is skewed here, but it wouldn’t make much sense to draw too much attention to the age discrepancy.

As it is, Cagney fucking kills the role. He transforms not just into Chaney, but into Chaney transforming into his characters, which is a pretty impressive feat. And there’s not a moment where he isn’t convincing.

Appropriately enough, Cagney’s mannerisms often remind the viewer of a silent film actor. Chaney comes to life through facial expressions and pantomime. A slight movement of Cagney’s brow can turn frustration into anger into fear or sadness seemingly in an instant. His expressions are some of the most melancholy you’re likely to see.

Despite the script’s unfairness toward Cleva, Dorothy Malone is very good in the role, and she does her best to make the character sympathetic without a whole lot of material to work with. In Malone’s capable hands, Cleva still manages to come off as more of a tragic figure than a traditional villain. 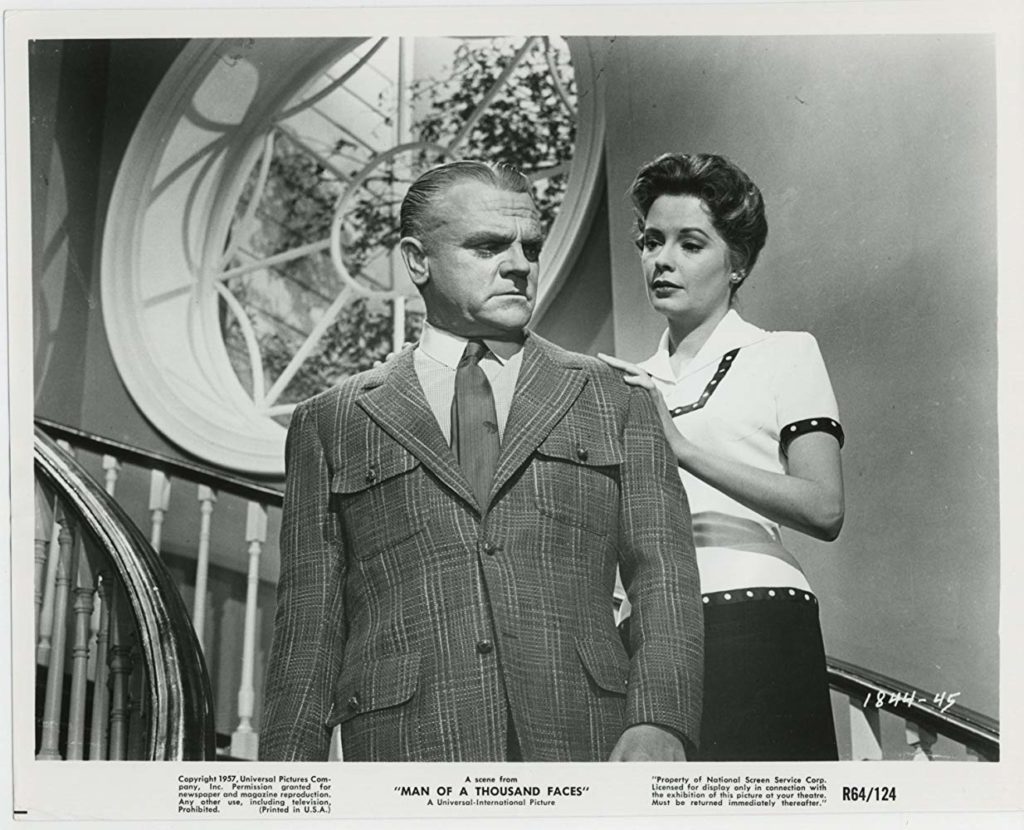 On a technical level, MAN OF A THOUSAND FACES both looks and sounds great. The shadows and low-angle shots give the film an almost noir feel. Plus, and I might be reading too much into this, but the low angles often show Cagney towering over Cleva as they argue. It’s almost as if Pevney’s direction was trying to subvert the script. These are moments, after all, where Chaney is ostensibly on the right side of things.

The music is wonderful, and there’s very few scenes where it’s lacking. The almost constantly playing score makes the film feel that much more stylistically close to a silent movie, which is a nice touch. The score is so ever present that it does get distracting at times, but composer Frank Skinner makes up for it during the more emotional moments, when the orchestra really soars. 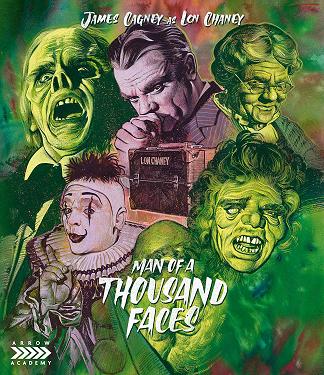 The special features are a bit sparse, which happens from time to time on Arrow Academy releases, but that’s fine. There’s a featurette, a short interview with Kim Newman, excited, enthusiastic, and smiling as usual, and there’s also a commentary by Tim Lucas, the founder of the Video Watchdog magazine. It’s quality stuff, but a little more might have been nice.

This is a cool edition of a film that hasn’t been treated very well over the years. The only other edition I found on either DVD or Blu-ray was on a Cagney double feature lacking any special features. So this is certainly the superior release. It’s a lot of fun, as long as you don’t sweat what’s fact and what’s fiction. Whatever its flaws, the film is worth watching for Cagney’s performance alone.