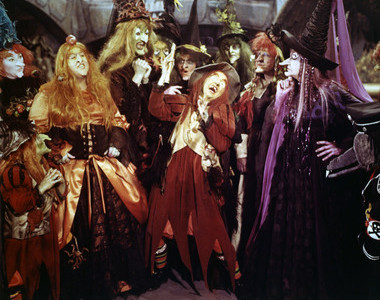 The 1970 big-screen adaptation of Sid & Marty Krofft’s H.R. Pufnstuf TV show, simply titled PUFNSTUF, is everything you’d expect: a menagerie of puppety oddballs padding out an episode of their groovy kiddie show while upping the ante with guest star Martha Raye and a German Rat chauffeur (who is clearly supposed to be a Nazi!). This movie strives to be THE WIZARD OF OZ for a new generation but feels more like a ‘70s educational film that went off the rails. Hardly a horror film, or even memorable, until we get to the rock song by a famous witch… 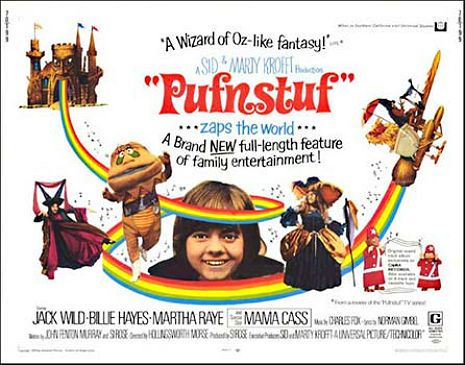 Most of the musical numbers can be a real chore. (The heavy lifting is given to child star Jack Wild, who had made a name for himself playing The Artful Dodger in OLIVER!) The exception to the forgettable musical numbers is when Mama Cass shows up. The Mamas and the Papas’ songstress plays Witch Hazel, wearing a putty nose, an orange and black gown, and a red rat atop her head. Mama Cass reportedly took the role as a favor to her neighbor, Sid Krofft.

Hazel is the rival sorceress to the TV show’s staple-villain, Witchiepoo. When she arrives at Witchiepoo’s castle, Hazel’s ready to win the talent competition in the annual Witches’ Convention.

The song forsakes Mama Cass’ usual folk-rock sound in favor of late ‘60s Broadway Rock. She belts out a beautiful song titled “DIFFERENT,” leading a chorus of funky, feel-good witches. This number is to PUFNSTUF what Tim Curry’s Halloween song is to THE WORST WITCH. It deserves its own renaissance, and it should become a regular routine for all Drag shows in October.

This song is an anthem for outcast children at the matinee screenings of PUFNSTUF, a rallying cry for nerds, geeks, dweebs and dorks. The message-heavy lyrics (penned by Normal Gimble with songwriting partner Charles Fox) are more than just platitudes when sung by a coven of fabulous ‘70s witches. The soundtrack is now out of print, but “DIFFERENT” will strike a chord with weirdo kids of all ages in every decade.