(aka Empire of Ash)

(aka Empire of Ash II…seriously)

In the future everyone wears

It’s true, because I believe everything I see in movies. Movies never lie right? RIGHT?! They may not lie, but they sure do confuse the shit out of you. Maniac Warriors was introduced to me by a friend calling it Empire of Ash. So I look it up online and realize there’s an Empire of Ash III (The last of the Warriors). I freak out! TRILOGY!!

I searched the internet like a madman for days before I learned the sad fact that Empire of Ash I and II are the SAME DAMN MOVIE. Not in the Evil Dead sense of the word either, where they remade the first movie and called it II. No it’s literally the SAME movie! With my head hung low…I digress. 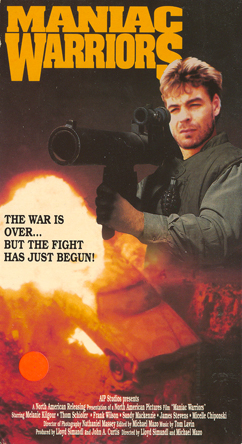 So Maniac Warriors loves to compare itself to Mad Max a lot. I mean, I guess, in a sense, it is. It’s a post-apocalyptic action film with lots of bondage looking clothes and a barely decipherable storyline. Here’s what I was able to comprehend; there are two warring cults, the Raiders and the Lards (poorly named, none of them were fat) and they’re fighting to find the last of the fertile woman in the future area called “New Idaho”(I’m classy enough to stay away from potato puns). One such woman is taken hostage by the Raiders and her sister discovers this. The sister herself gets kidnapped by a guy who doesn’t seem to be affiliated with either side. Stockholm Syndrome takes effect and she falls for him, but then HE gets kidnapped by the Lards. The Lards apparently want his blood, why? I have NO IDEA! Something about antibodies? 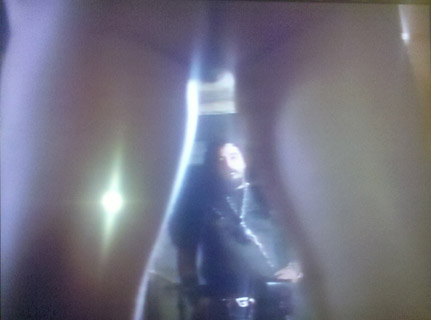 The way new characters are introduced in Maniac Warriors is kind of subtle. When I first watched it I was with a crowd of loud drunken revelers and the flick made NO SENSE. Out of no where the film cuts to two brand new characters who if you didn’t hear the very quiet radio broadcast about 20 minutes earlier in the film you’d have no idea who they were. One of them looks so much like Terry Bradshaw that I had to check IMDB to make sure it wasn’t… it’s not.

The characters turn out to be old friends with the father of the guy who the girl whose sister got kidnapped falls for (say that sentence five time fast). They set out to bring all out war to both factions and despite there only being 4 of them they manage to save everyone who needs saving and kill everyone that needs killing. And about halfway through the film a guy with a ROCKET LAUNCHER HAT shows up, blows up a shed with his hat and then disappears only showing up one more time in the film. The rocket launcher hat is, all by itself, worth it to watch this masterpiece.

At the end of the day it’s hard to tell who the good guys were and who the baddies were, ultimately pretty much everyone dies anyway. Is Maniac Warriors worth tracking down? Fuck Yeah it is! I found it rather easily on Amazon, go find it, but this will be one of the few times I DON’T suggest watching it with a group of rowdy maniacs. Watch it with a few friends who know the difference between talking and screaming because with MANIAC WARRIORS, the devil’s in the details

4 ROCKET LAUNCHER HATS out of 5