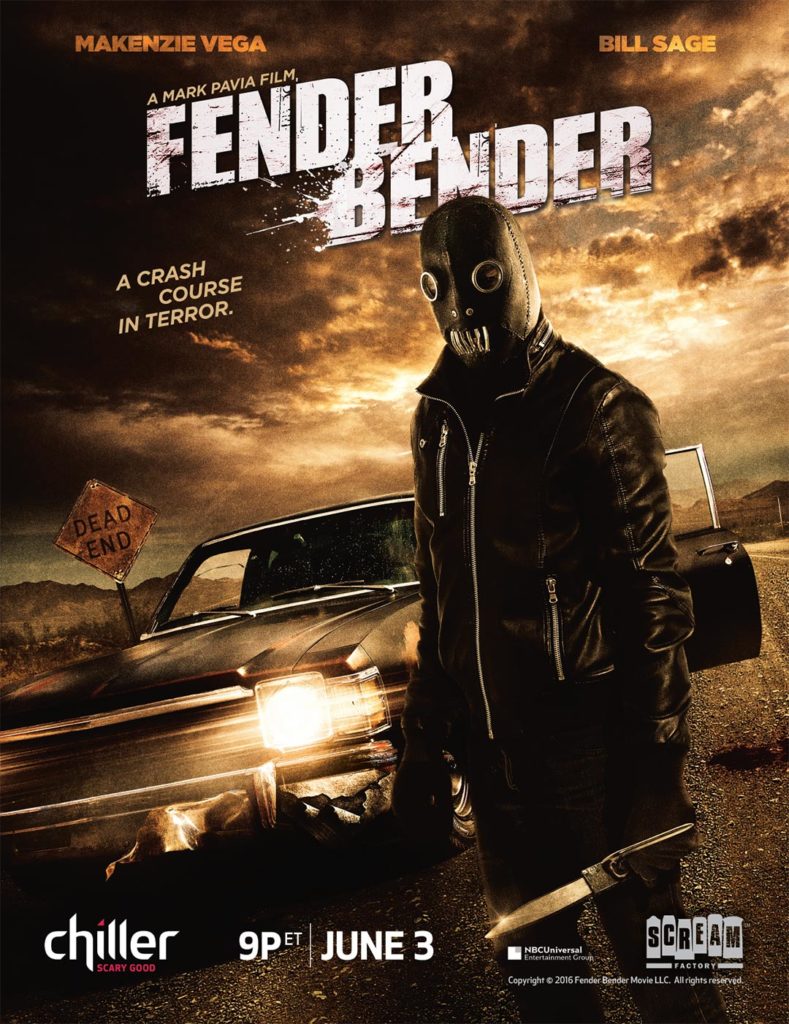 Writer/director Mark Pavia’s feature debut was 1997’s THE NIGHT FLIER, an ambitious, gory adaptation of Stephen King’s vampire story. While it did not make much of an impression on audiences or critics, it was an impressively mounted production when taking into consideration its low budget. That film developed into a small cult favorite over the years because of the great lead performance by Miguel Ferrer and a go-for-broke finale that layered on the nightmarish imagery and buckets of stage blood. It took nineteen years for Pavia to release FENDER BENDER, his follow-up feature. Where Pavia’s debut borders on the audacious and overreaches at times, his new film is modest and restrained almost to a fault. That is not to say it is a bad film, I suppose I just had higher expectations from a filmmaker who came sprinting out of the gate.

Hilary Diaz (Makenzie Vega) is a New Mexico teenager having a very bad day. Armed with information from a friend that her boyfriend is cheating on her, she sneaks out of her house early in the morning to confirm that news. Heartbroken, wiping away tears, she is sitting at a stop sign, hesitating to answer a phone call from her mother, when she is rear-ended. Freaked out because she is driving her mom’s brand-new car, she barely pays attention to the creepy Driver (Bill Sage) who hit her. He may seem nice and say all the right things, but there is something off about the way he stands a little too close, puts an uninvited hand on Hilary’s shoulder to comfort her, and is super-helpful when it comes to the exchange of information.

Of course, the problem with exchanging information after an accident is that you are giving a complete stranger your name, license plate number, and insurance information (FENDER BENDER takes it a step further than reality by having the parties also exchange phone numbers, addresses, and driver’s license numbers). If that stranger is, say, a psychotic serial killer, you probably want to make sure you lock your doors and windows up tight.

Things start going sideways not long after Hilary gets home. A car that looks suspiciously like the rusting old muscle car driven by The Driver starts cruising by her house. She receives apologetic text messages from him that betray a little too much knowledge of her situation as a teenager left home alone by her parents for the weekend. A cake decorated with the word “Sorry” is left on her mother’s car. In short, things progress exactly as you would expect a slasher movie to go. Hell, the night even turns stormy, and additional fodder for the killer show up in the form of Hilary’s friends (Dre Davis and Kelsey Leos Montoya).

No offense to Vega (who is very good in the film), but FENDER BENDER is never as good as it is in its opening scene. Pavia stages a terrific stalk-and-slash sequence that shows how The Driver operates as he attacks and kills a victim (Cassidy Freeman) after menacing her in the way he does Hilary later in the film. Dressed in a black leather jacket, black jeans, and a bondage mask that makes his face resemble the grill and headlights of his car, he uses a knife that extends out from a modified car door handle.

The sequence is suspenseful, with Pavia making good use of long takes, leaving lots of negative space in the frame, and the truly unnerving first glimpse of The Driver in his full costume. The rest of the movie has a hard time living up to this opening.

While those long takes in the opening work well, there is about a fifteen to twenty minute sequence of Hilary moping around her house after being left behind by her parents where the slowly creeping dolly shots are dreadfully dull. Even with the knowledge of what The Driver did to his previous victim, watching Hilary simply wander through her house, talk on the phone, and lay on her bed is not exciting or suspenseful.

Once The Driver reappears and takes the film through some dark turns (some expected, some surprising), the film gallops through some impressively put together slasher scenes. Vega shines in these sequences as the nice, sweet girl who has to fight back. Sure the character is an archetype at best, a cliché at worst, but Vega is a warm presence and you cannot help but root for her. Sage, even with his face hidden behind the mask, makes an impact with the way he moves. Attacking with quick, graceful movements, he is the anti-hulking slasher, going for direct kills and striding through Hilary’s large home with confident swagger.

A co-production of Scream Factory and Chiller TV, FENDER BENDER aired on the latter’s network over the summer, and is now getting a pretty nice Blu-ray treatment from the former. 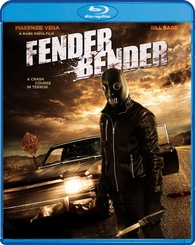 The Blu-ray features a standard making-of documentary and trailer; a “VHS cut” of the film changes the aspect ratio to the old 4:3 of tube televisions, requires tracking, and is faded; a nifty “Slashback” trailer reel of old slasher film trailers; a producer’s commentary; and a director’s commentary.

The director’s commentary reveals Pavia to be an enthusiastic, chatty, and practically a walking encyclopedia of slasher film history. Moderator Rob Galluzzo barely has to ask any questions and never once needs to prompt Pavia to share stories as happens in a lot of commentaries. Eager to heap praise on everyone in the cast and crew, the commentary actually feels like a little too much information. More interesting is the way Galluzzo and Pavia talk around the nineteen-year gap between THE NIGHT FLIER and FENDER BENDER. Constantly referring back to the “crazy” story of all the projects that fell apart, Galluzzo and Pavia eventually just recommend that viewers listen to his interview on the Shockwaves podcast co-hosted by Galluzzo for the full blow-by-blow account.

Slickly done with an impressively realized villain, FENDER BENDER does not try to reinvent the wheel. There is something comforting about its embrace of genre tropes — especially when done with such an assured hand—but I do hope that Pavia returns to his more ambitious roots for his next film. Hopefully it will not take another nineteen years before we see it.