I love genre cinema. I will always have a soft spot for horror, action, sci-fi, and all the subgenres that exist inside those larger categories. What I have never felt any real connection to are those films that exist in the realm of pure sleaze. You know the ones: the films from the ’70s and ’80s, filled with ugly violence and sex that is the opposite of titillating, usually shot on cheap film stock with semi-amateur casts. But knowing these films have a large following and several companies devoted to restoring them makes me wonder what I am missing. With that in mind, I am going to do a deep dive into the world of sleazy exploitation. This is My Exploitation Education. This week’s entry is MEAN JOHNNY BARROWS. 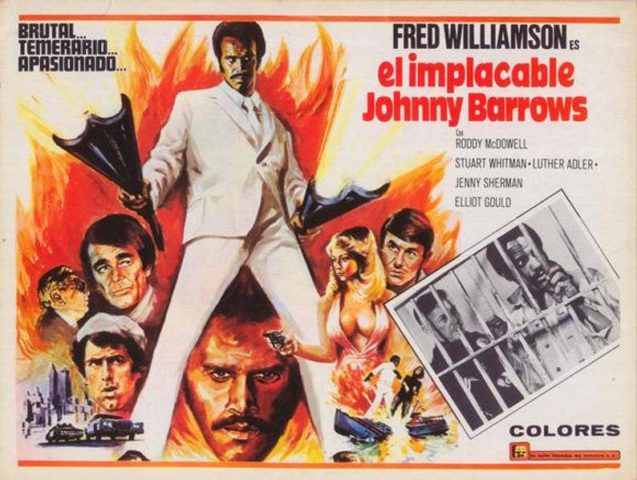 The main point of interest when it comes to MEAN JOHNNY BARROWS is that it is the directorial debut of star Fred Williamson. While his career behind the camera can most charitably be described as uneven, his films have been successful enough that he has managed a long directorial career based mainly around understanding his own screen persona and what his fans want from a Fred Williamson movie. That is what makes MEAN JOHNNY BARROWS such a curiosity. It feels like a real attempt by Williamson the director to break Williamson the movie star out of his traditional hyper-masculine caricature. The resulting movie is not good, but it is a surprising bit of an attempted artistic stretch.

The set up feels like it is going to be the usual Williamson vehicle as Johnny Barrows (Williamson) gets kicked out of the Army for punching his racist commanding officer (Aaron Banks, giving off weird Timothy Carey vibes) after the officer nearly kills him in a mean-spirited prank. But the movie quickly shifts gears as Johnny returns to Los Angeles in a fog. He is mugged by a couple of goons that a traditional Williamson character would dispatch with ease, winds up in jail where a sympathetic cop relays Johnny’s tragic backstory to another prisoner, is put back on the street where he is homeless for several days before finally getting a job as a janitor at a gas station owned by a smarmy bastard (R.G. Armstrong).

For the first thirty minutes or so of MEAN JOHNNY BARROWS it is interesting to watch Williamson work so hard against his screen persona. Johnny casts his eyes at the sidewalk when the gas station owner treats him like shit, he repeatedly begs for food and a job, his shoulders are slumped, and the traditional Williamson swagger is nowhere to be found. But after a half-hour of watching Johnny wander L.A. being a sad sack, it becomes dull. The only respite from Williamson’s attempt at old-fashioned melodrama is the occasional moment of unintentional humor as Johnny repeatedly turns down an offer from an old buddy-turned Mafioso (Stuart Whitman) to join his organization as a hitman. It is clear from their first meeting that Johnny is either going to go to work for him or wind up fighting against him, but it takes an hour and at least six scenes of Johnny explaining that just because he killed people in Vietnam, that does not make him a killer since he was a soldier then. The delaying of the inevitable becomes its own running joke.

Once Williamson the director finally stops stalling the inevitable, the action as Johnny picks up his guns is disappointingly too little too late. But even though MEAN JOHNNY BARROWS never truly succeeds as a shake-up of Williamson’s image, it does find the director operating at his weirdest in places, having some fun coloring outside of the lines. Most of this comes from the eclectic casting that includes Roddy McDowall as the smarter-than-he-appears, sniveling son of a mob boss and Elliott Gould clearly improvising a bizarre cameo as a jovial, flamboyant homeless man. But there are other strange or entertaining moments that don’t rely on stunt casting like Williamson unable to stay in character when he is supposed to be completely beaten down by life but still quick to flash a shit-eating smile when a beautiful woman is in a scene with him or the movie’s abrupt, somewhat nihilistic ending.

Despite how many breaks I cut the movie for its attempts to run against the grain of Williamson’s image and some of its straight-up weirdness, MEAN JOHNNY BARROWS still is a disappointment. The last thing any exploitation movie should be is boring, but that is sadly the case here for a good chunk of the time.