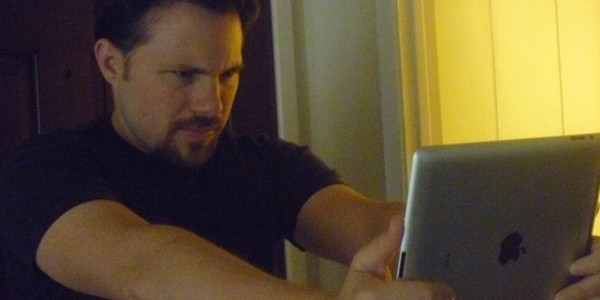 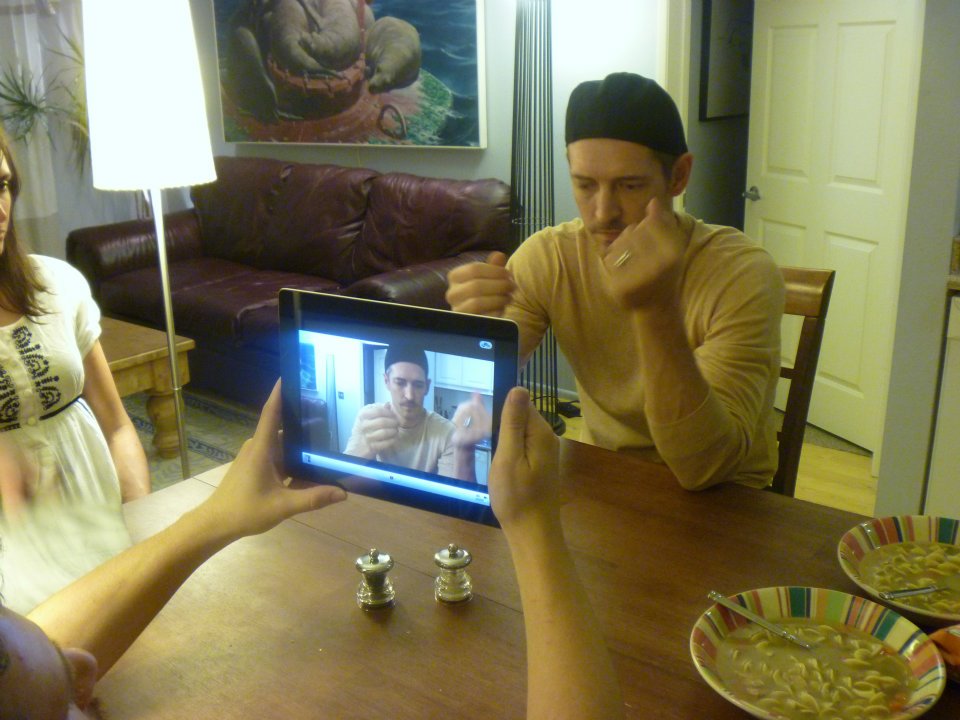 As Plato may or may not have said: “Necessity is the mother of invention”. It’s a proverb familiar to all who work in the constantly shifting world of no-budget cinema, but few have embraced the ethos as thoroughly as director Aaron Mento; director of STANDARDS OF LIVING. A veteran of genre short films, Mento saw a health scare – that afflicted him with temporary blindness – as a sign that he needed to tackle a larger project. With only a few small locations and an iPad2, Aaron then crafted a unique, inventive and thoroughly fascinating science fiction/horror film that pus most of his microbudget brethren to shame. And then he put the whole thing online for free. I recently chatted with the young director about ocular migraines, spirituality and embracing his limits.

Sweetback (SB): Before we delve into the technical aspects of STANDARDS OF LIVING, I’d like for you to talk about the origins of the concept. It plays out almost like a classic Twilight Zone episode, where the twisted concept is introduced and then slowly elaborated on throughout the running time. How the heck did you come up with it?

Aaron Mento (AM): I’m a huge fan of THE TWILIGHT ZONE (especially “Will the Real Martian Please Stand Up?”) so thanks for that comparison. The inspiration for the concept came from wondering what would happen if a magician could really make things disappear? Where would these vanished items go? What would happen to a person who disappeared, and what would they see? This was the initial seed for STANDARDS OF LIVING.

SB: Part of the difficulty of presenting science fiction is the usual need for complex (and expensive) special effects. Your film – like Shane Carruth’s PRIMER – embraces the mundanity of the fantastic, with its parallel universes being created in just a few small rooms. Did you write the film around the resources you already had, or were you constantly pushing the envelope of what you could do?

AM: I only had two locations available to me – an apartment and a small condo. STANDARDS OF LIVING was written with these locations in mind, so I only had a few rooms to write the entire story around. This forced me to be creative, to think outside the box, in order to make something that I thought would be entertaining. I worked really hard to make sure that the script had surprises at every turn, so that the movie would never be boring. If a viewer gets so engrossed in the story that they forget the movie was shot on an iPad, or that they’ve only visited a few rooms, then I’ve done my job.

SB: STANDARDS OF THE LIVING is the first feature to be shot entirely on an iPad2. It’s also your first feature length film after a series of shorts. What prompted the decision to use the iPad instead of at traditional camera set-up, and what were the main technical challenges of filming this way?

AM: Honestly, I had no intention of shooting a feature film on an iPad, but then I had a health scare that kicked me in the ass. My left eye went blind for fifteen minutes and I thought I had a brain tumor. A series of tests determined that the blindness was caused by an ocular migraine, which is like a headache inside of your eye. This is usually caused by stress. After feeling like I dodged a bullet, I decided I was going to finally make a feature film. No more waiting for money, or an agent, or the right gear. No more excuses. So I looked at what I had available to me, and there was my iPad 2. I wrote STANDARDS OF LIVING specifically for the iPad, named my production company OCULAR MIGRAINE PRODUCTIONS, and never looked back. My eyes have been fine ever since. There were a lot of challenges shooting with the iPad because the camera just wasn’t made with serious filmmaking in mind. The iPad has one lens and it’s very wide, so I had to get REAL close for close-ups. I constantly fought with the auto-exposure, as the camera would adjust automatically to different lighting. We used external microphones for recording sound, but the iPad shoots at unpredictable frame-rates, so this caused some problems syncing sound in post-production. Eventually everything synced up without any hiccups. STANDARDS OF LIVING was written with the weird “look” of the iPad in mind, and despite all of these challenges, the iPad camera added a strange atmosphere that worked well for this story.

SB: Can you talk a little about the process of casting the film? There’s a small number of players, and some of the actors have to basically play two extremely different variations on the same role. Was it difficult getting performers to go along with the idea, and were any hesitant about the choice to use the iPad?

AM: Thankfully, the actors were all game to be in a movie shot entirely on an iPad. The idea of playing two roles was actually very appealing to them, and they nailed the different nuances. The cast was also comfortable going to some dark and weird places, as the script gets pretty wild. I was the only guy directing, shooting, and ultimately editing the movie, so the actors put a lot of trust in me. The wardrobe was also my choice, and people may not realize that Scott (Peter) and Derek (Stu) are both wearing women’s clothing. These guys were down for anything! We only had two weeks to shoot, and only 6 hours each night, so there was no time for second-guessing or cold feet. There were a few occasions where I was like “You’re really okay with doing that?” and the actors would say, “It’s in the script, so yeah.” For instance, writing the “Parmesan cheese” scene was one thing, but actually directing and shooting it was pretty disturbing. Nonetheless, we tackled it as a team and never compromised.

SB: The film tangles with some rather complex ideas regarding spirituality and invoking meaning out of chaos. Do you consider yourself a spiritual person? Was there a concern about introducing these elements into a genre framework?

AM: I’m definitely a spiritual person but do not subscribe to any one religion. The thing about religion that disturbs me is that it can be used to promote hatred. For instance, there is a passage in the Bible that some people use to justify being prejudiced against gays and lesbians. Cherry-picking Bible passages so that you can happily hate others is despicable, and I wanted to explore this in STANDARDS OF LIVING. So I asked myself, what if there was another passage in the Bible that people cherry-picked? What would our reality be like? Some of the best episodes of THE TWILIGHT ZONE tackled sensitive subject matter, so I was not too concerned about introducing these elements. The movie is horrific and funny, but I also hope that it gets people thinking.

SB: What are you most happy with about the finished product? Are there any elements you wish you had a bit more time and money to work on?

AM: I’m very happy with the story, the pacing, and the work that the cast did. Also, Roman Kovalik did amazing things with the music. I could have edited sound and picture forever, but eventually you have to step back and let your movie be seen. If I had more money I probably would have done the “instant pregnancy” more graphically…

SB: For readers interested in checking out STANDARDS OF LIVING or your other work, what’s the best way to do so?

AM: STANDARDS OF LIVING is streaming for free at http://www.standardsoflivingmovie.com/ I welcome everybody to check it out and am appreciative of all feedback, good or bad. You can tweet me @aaronmento.

SB: Anything else to plug? Any upcoming work we should look out for?

AM: I just finished writing an insane 80’s action throwback with my friend Louis Sweeney. We’ve been describing it as ROAD HOUSE meets EASTBOUND & DOWN. The reaction to the script has been great so far, and we’re hoping to keep that momentum going. I’m also writing a low budget slasher that I’ll probably produce on my own.

SB: Finally, what advice would you have for a young or inexperienced director looking to shoot their first feature?

AM: My advice is to not listen to ANYBODY who says you can’t make a movie. If you don’t have a “professional” camera, just shoot a movie on whatever is available to you. But most importantly, the two MUST HAVES are good sound and a screenplay that you absolutely love. Spend some dollars on a sound crew and pound those keys until the script is ready.