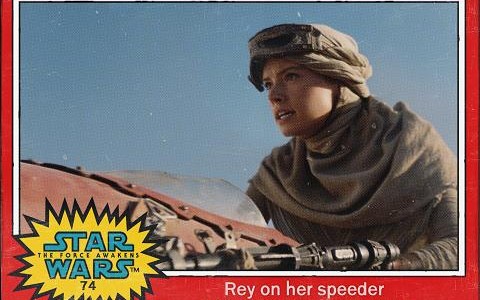 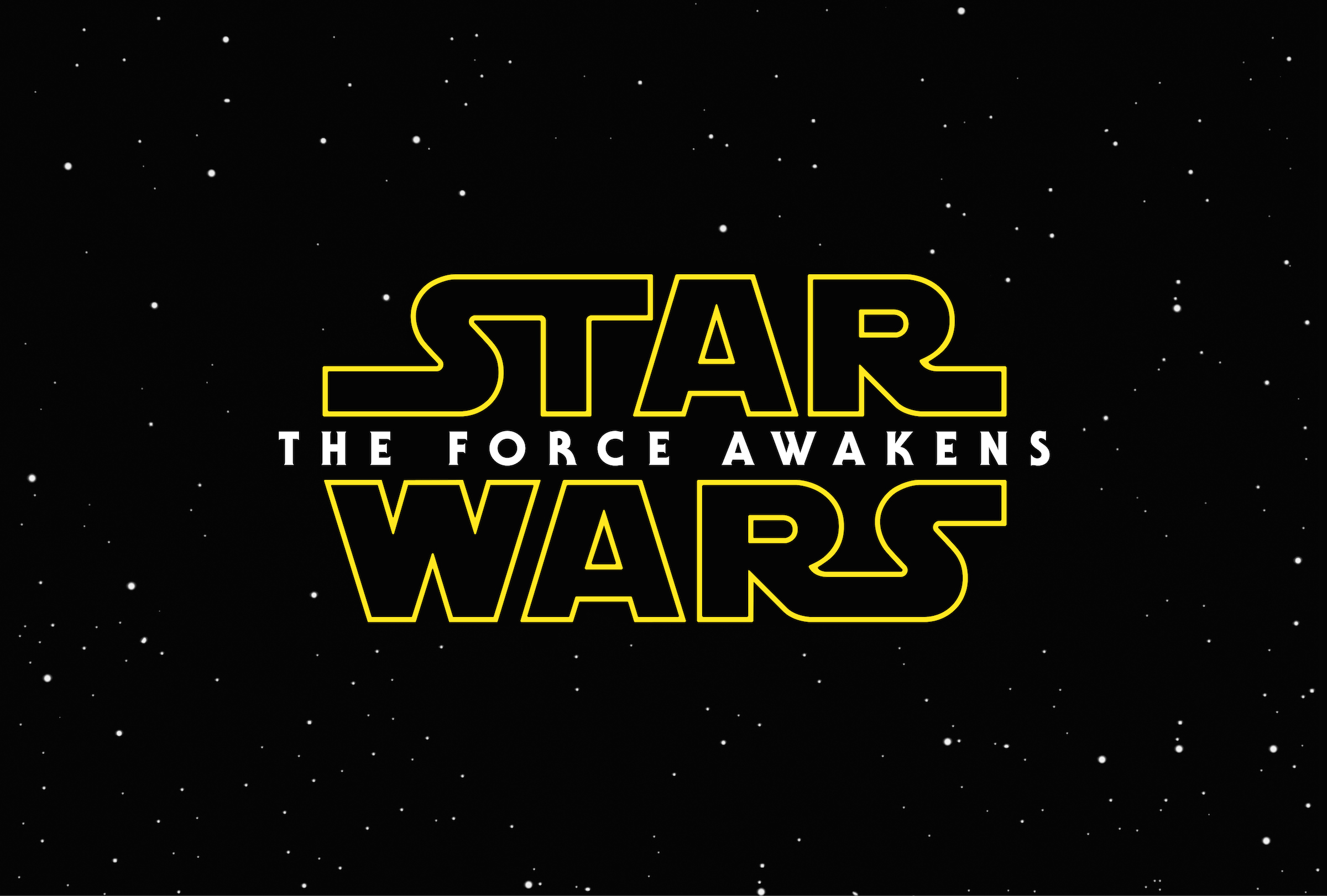 Hours ago, JJ Abrams and his team opened up the mystery box and revealed the names of some of the new characters to be featured in STAR WARS: THE FORCE AWAKENS in the form of retro-style Topps trading cards. Just a few weeks ago, we were treated to an 88-second trailer that introduced these new faces. Now we can put a few names with the faces.

A little background on me, as I’m sure my fandom of the series will be vetted; STAR WARS is practically in my DNA. My mother became a fan the first time she and my dad saw the Imperial Star Destroyer fly over Tatooine in 1977, and was very excited when I was born in 1980, as it gave her an excuse to start buying the toys. I grew up with STAR WARS and always wondered why video stores even stocked it on the shelf because in my mind it was a movie that EVERYONE owned. I saw RETURN OF THE JEDI in theatres at the tender age of three, and I walked out of THE PHANTOM MENACE in 1999 with my then girlfriend who looked into my disappointed eyes and said “You didn’t like it, did you?” I couldn’t argue with her; I didn’t.

20th Century Fox and George Lucas fooled me two more times, so I remain cautiously optimistic about the new J.J. Abrams brand of STAR WARS. Just this week on my podcast DRINKS ON MONDAY WITH THE STRIKE TEAM, two of my best friends and I broke down the new 88-second trailer and did our best to guess who these characters are and what they’re going to be up to for the next three films. I’m going to do the same here, as I think the names may shed a little more light onto our new heroes and villains and perhaps the course that the new films are taking…

“Finn on the run.” states the card. From the moment I saw Finn’s head pop up in the trailer I figured he was not a real Stormtrooper, but perhaps wearing a disguise much like Luke and Han did in the original movie. A separate card features an image from the trailer of “Stormtroopers preparing for battle.” You can really see it now that there is in fact one officer who is a little short to be a Stormtrooper. I am assuming this is Finn, and Finn is our new Luke Skywalker; a regular guy thrust into an amazing adventure. This may be a little on the nose, but the first thing that comes mind is HUCKLEBERRY FINN, the story of a young boy who craves adventure.  As for the nonsense on the internet that “there are no black Stormtroopers” if in fact he is not undercover but a recruit, and the argument that all Stormtroopers are clones of Jango Fett, my response is how can you decry the prequels for being terrible (which they are) and then want the new movies to follow the rules set forth by them. Abrams, Kennedy and Disney are pretty close-lipped about everything but I think that they are going to all but sweep the prequels under the rug, much like they did with the Extended Universe. THE FORCE AWAKENS is taking place sixty years or so after the Clone Wars so the filmmakers may not remove elements from the canon but I don’t think they’re going to be referencing them at all.

“Rey on her speeder.” states the card. Ladies and gentlemen, this is your new Han Solo. I can’t say for sure whether she is the daughter of Han and Leia, I think Abrams might forgo any of our new heroes being related to our friends from the original trilogy. Looking at the footage of her from the trailer, she gives off a rogue-ish quality and the name Rey FEELS like Han and I’d be willing to bet that BB-8 is her sidekick, her Chewbacca. Today’s Hollywood features plenty of female leads in action roles, particularly in the movies aimed at the geek audience and I think Rey is going to be bigger than Katniss.

When I fist saw “Poe Dameron in his X-Wing.” I began to think about what his archetype is going to be and I came to the conclusion that it’s something we really haven’t seen in the STAR WARS universe. The name Poe brings to mind Edgar Allen Poe and I don’t think that’s a coincidence. To me he comes across as a stoic war veteran, like a darker Wedge Antilles; someone who’s seen it all and is drawn to the rebellion by a sense of duty. This is really the way Obi-Wan Kenobi should have been portrayed in the prequel trilogy but the ball was dropped and I think Abrams and company are really trying hard to right those wrongs.

“Kylo Ren ignites his Lightsaber.” There was much conjecture on the internet that this new villain is in fact Luke Skywalker but just judging by his body type I’m thinking it’s Adam Driver or possibly an Inquisitor as introduced in the pretty solid STAR WARS: REBELS series. There already seems to be ambivalence that this bad guy carrying a red lightsaber doesn’t have “Darth” in his name. Darth as a title was something that became ingrained in the world of STAR WARS with THE PHANTOM MENACE. I stated earlier that I think Abrams is largely ignoring most of the rules that were put in place by Episodes I-III and we may not hear the terms “Darth” or “Sith” in these movies. Notice that that the term “EPISODE VII” has not been seen in any of the marketing so far.

The ball droid is BB-8

“BB-8 on the move.” Being “on the move” would be a throwaway line in most films but to anyone who can recite the original STAR WARS as well as I can, it’s a classic line. As I stated earlier, I think BABY-8 is going to be a loyal co-pilot like Chewie but have a bad attitude like Artoo. I think it’s been confirmed that BB-8 is a female droid, which will be a nice addition to the STAR WARS galaxy. It wouldn’t surprise me if she’s co-piloting the Falcon when it appears in the trailer.

There you have it folks, the new STAR WARRIORS. I for one respect the J.J. Abrams “mystery box” approach to his films. He’s just trying to give us the viewer a similar experience to when we saw STAR WARS the first time and knew next to nothing going in; I’m sure there were people who thought Darth Vader was a robot. When I first read the names just hours ago, they sounded weird to me but by the end of writing this piece they do feel very STAR WARS; I still don’t know anyone named Lando or Dak. In his heyday George Lucas really had a knack for names, but I think that waned a bit by the prequel series. The presentation as retro baseball cards is inventive but still marketing nonetheless. I like Miller Lite out of the retro can but it’s still just Miller Lite. I saw a REVENGE OF THE SITH action figure with retro Kenner packaging, harkening back to the RETURN OF THE JEDI logo, and I was fooled for a hot second that REVENGE OF THE SITH was actually a good movie, which it was not. I remain cautiously optimistic, but as a long time fan of the series, I don’t even think they need to try that hard to bring me back into the fold.

Who am I kidding, I’m back on board. 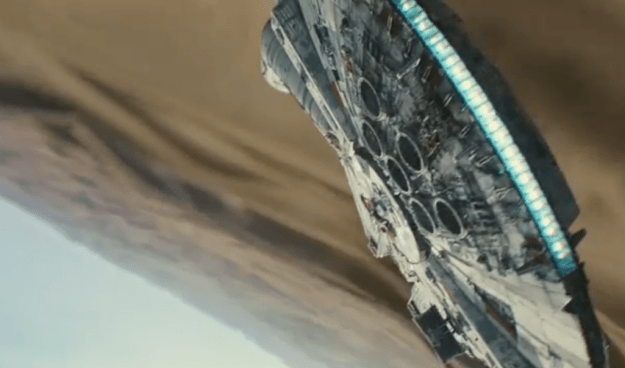