Home  ⁄  The Wire  ⁄  ‘MOMO: THE MISSOURI MONSTER:’ A FUN CRYPTID DOCUMENTARY WITH A FUN PREMISE 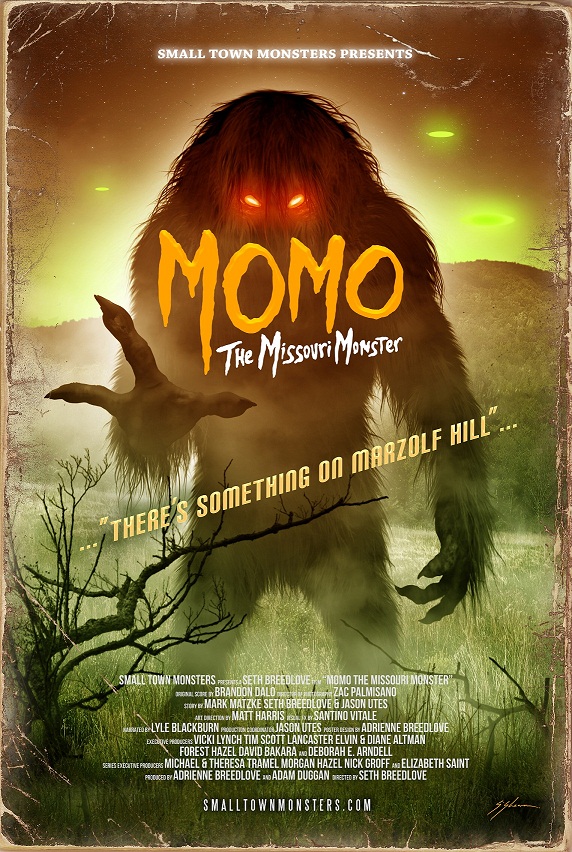 Director Seth Breedlove took a pretty unique approach in making his latest documentary film, MOMO: THE MISSOURI MONSTER. Part of the movie is in the style of a 1970s exploitation film, lost after many years but now showing on a fictional docu-TV series hosted by Lyle Blackburn called Blackburn’s Cryptid Casefiles. (And yes, I would definitely watch this if it was a real show.) While the TV show doesn’t exist (yet?), the faux grindhouse film is based on real events that took place in Louisiana, Missouri in the early ’70s.

But also within this pretend TV show, there are documentary segments. Filmed by Breedlove and his crew, these interviews are with residents of Louisiana who were around at the time, though most of them weren’t directly involved in the events.

This very unique setup means that we’re not just exploring the legend of the bigfoot-esque Momo monster, but also the nature of folklore and local mythology as it is told, retold, adapted, and changed with the passing of time. And why not get a bit meta, a bit existential about the whole thing?

And Momo was kind of the perfect legend to explore this way, too. Momo is sort of like a sasquatch, but it has three toes, glowing red eyes, and has shaggy dog-like fur. It also has a weird connection to UFO phenomenon. To the best of my knowledge, this makes the Momo story both similar to many types of cryptid folklore and also wholly unique.

Though there were sporadic sightings before this, the incident at the Harrison family house got the thing going in a big way. Brothers Terry and Wally Harrison were playing with their dog in the backyard when they first spotted the monster. Their older sister Doris looked through a window and saw the giant beast staring at the boys and quickly hustled them inside. Their father, a devoutly religious man named Edgar, heard their story when he got home from work and later had a run-in with Momo himself. Later, during a prayer meeting outside the Harrison house, a mysterious series of lights appeared in the sky, suggesting that maybe Momo had a supernatural or at least otherworldly origin. After that, the town is in full-on Momo hysteria mode. It’s during that time that a single footprint is found, providing the only physical “evidence” in the case.

The exploitation film sections are so good that you can almost believe this is real footage that’s been recovered. It’s clearly shot on video, though the grain effects are just about right in mimicking 16mm film. Also, the title graphics are a little too polished to have come from that era. But it doesn’t matter. Breedlove and company aren’t going into this thing trying to actually convince anyone that this is a real movie. The magic happens when you suspend your disbelief a little bit and really get lost in the vibe of the thing.

The movie goes back and forth between the faux film and documentary segments quite seamlessly. Host Lyle Blackburn appears briefly in between to tie the two parts together. His presence is essential to the success of the concept. The fiction film makes a claim, and the interview subjects correct the claim, explaining what really happened, and Blackburn adds some commentary in between. In this way, the film within a film is itself a deconstruction of 70’s monster movie tropes and the sensationalized nature of the genre. Gotta start the film with a big kill before slowing things down a bit and getting into the story proper. Now, how many times have we seen that? Even though the real-life incident the opening is based on was only a sighting, and not a mauling, you can almost picture a would-be David F. Friedman type salivating at the idea of turning something rather mundane into a giant spectacle.

During the documentary sections it becomes obvious that the townspeople are mostly a fairly skeptical lot. Most of them believe some strange things took place in 1971-1972 in their otherwise sleepy little Mississippi River town, but they usually stop short of outright admitting a belief in an alien bigfoot-type creature. The whole, “I don’t know exactly what happened,  but something happened” kind of thing.

One of the more interesting interviews is with Gail Suddarth, who, at seven years old, “found” the Momo footprint. And by “found,” she admits that she had heard the Momo stories and was playing outside and kind of bored, so she made a footprint in the mud and then went into her house to tell her parents. To her great surprise, her family believed the footprint was real. Later, a plaster cast was made. By that time the story had gotten so big that Gail was too embarrassed to admit that she’d fabricated the whole thing.

Well, so much for physical evidence. But the story is quite compelling on its own as a piece of local folklore. Did the movie convince me that there was a bigfoot running around in the woods? Well, no. Not really. Something strange certainly happened to the townsfolk of Louisiana, Missouri, but it kind of doesn’t really matter what it was exactly. MOMO: THE MISSOURI MONSTER is a little spooky, a lot of fun, and it’s a great exploration of the birth of a piece of folklore, and how the legend changes and expands over time. The concept is very unique, and the movie really succeeds in delivering on its premise.