THE BANANA SPLITS MOVIE is the kind of WTF, bizarro-world horror goof that feels made for pre-fab cult status. It has a premise jerry-rigged for the look-how-wacky-we-are outrageousness of modern manufactured cult schlock: let’s take the titular TV series, a sort of proto-Teletubbies afternoon-babysitter Hanna-Barbera singalong that originally ran for two seasons between 1968 and 1970 and turn its modish, floppy costumed stars into the villains of a cheekily gory midnight movie splat-a-thon. Cue the broad-stroke, overly self-conscious camp pantomime.

Thankfully, THE BANANA SPLITS MOVIE isn’t that kind of movie. As directed by Danishka Esterhazy (LEVEL 16), BANANA SPLITS is a mostly straightforward monsters amok thriller. It’s the kind of film that plunks a mix and match group of human monster chum into a location and then sees fit to have them slaughtered one by one by a gang of venomously murderous inhuman butchers. Except, in this case, those butchers are the stars of a real life kitschy-colorful kids TV show. 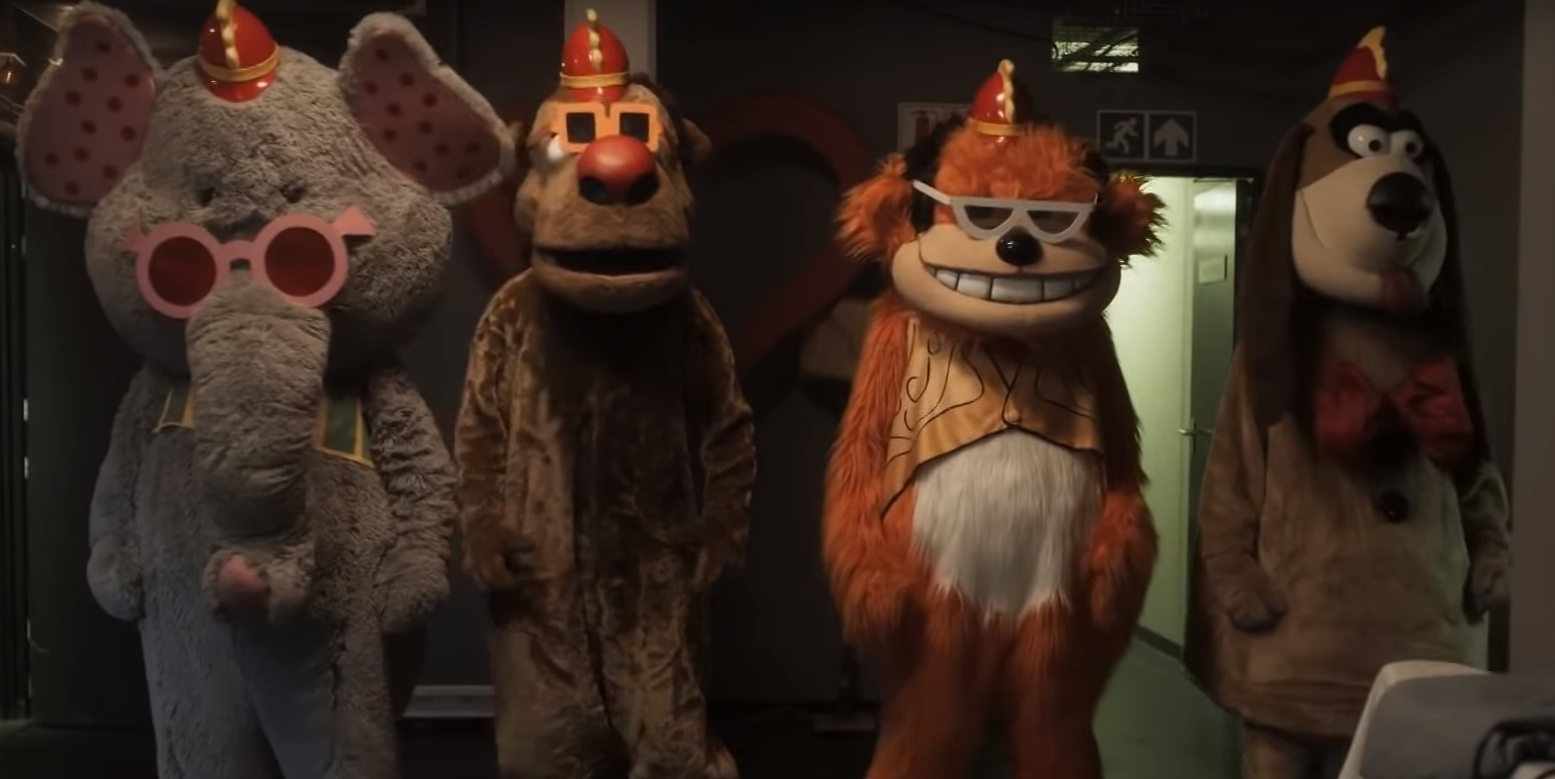 Though the real life Banana Splits, a four-animal rock band that’s like The Monkees as played by a quartet of H.R. Pufnstuff rejects, only lasted for a couple years, in the world of THE BANANA SPLITS MOVIE they have remained popular as a kiddie show staple for the past fifty years. Only they are just now showing their musty middle age decrepitude: they’ve just been cancelled by the new director of programming for their network, who wants to free up some stage space for something hipper than these relics of ‘60s mod culture. Just in time for their seemingly biggest fan, Harley, to be brought to a taping for his birthday, and just in time for the Splits — Drooper, Fleegle, Bingo and Snorky — to decide the show must go on — at all costs.

The Banana Splits, in real life, were played by wage-slave actors in sweaty fur costumes , but here, they are robots — animatronic cartoon beasties built for the sole purpose of providing children with a daily dose of afternoon entertainment. So when they find out that they are being shut off, their survival instincts kick in, and the Splits begin slaughtering those left behind in the dingy studios after their last show. The Splits lurk amongst the darkened hallways, and use the tools of their kiddie-entertainment trade — over-sized lollipops, prop toy hammers, a chintzy yellow buggy they ride around the  lot in — to murder the assorted audience members unlucky enough to win a meet-and-greet opportunity after the final taping.

THE BANANA SPLITS MOVIE at times has the feel of a bargain-bin SyFy Channel castoff. The director, Danishka Esterhazy, doesn’t have much sense of pace. The film sometimes plods from one ironically twisted death scene to another, and the film has the flat, claustrophobic look of a generic cable-TV programmer. It makes you understand exactly why a mothball riddled Saturday morning property like the Banana Splits could get turned into a goofball splatter-happy horror movie; after all, there’s not many other people looking to reinvent these adorable counterculture caricatures into Millennial icons. Still, while THE BANANA SPLITS MOVIE looks cheap, it has a visceral, “we really went there” quality. Esterhazy, to her benefit, plays the thing entirely straight; there’s none of that wacky, ain’t-we-stinkers? broadness of most modern horror comedies.

Harley’s family, including his mom, awkward older teen brother and pompous jerk of a stepdad, a thirsty stage dad, and a pair of flamboyant Instagram influencers are among the cannon fodder fed into this meat grinder playground, splat with grisly, if sometimes clunky, efficiency by Esterhazy. Nothing about THE BANANA SPLITS MOVIE surprises, and it’s not exactly “scary.” What it is, is a cheap, but fitfully entertaining and successful attempt to mutate a dusty old kiddie property into modern movie monsters.

THE BANANA SPLITS MOVIE is now out on DVD and Blu-Ray and will premiere on the SyFy Channel September 21.