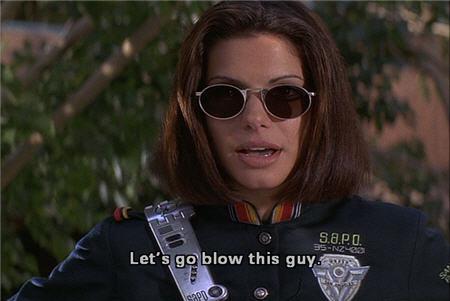 When kids stampede to movies like TWILIGHT: BREAKING DAWN and THE HUNGER GAMES and whatever that one is where the teenagers run around in mazes, it’s easy to make fun. But which one of us hasn’t gone a little overboard in our enthusiasm for a movie which may or may not deserve that level of ardor? After all, back when I myself was a ‘tween’, I saw DEMOLITION MAN in the theater four times.  When it comes to fandom, there aren’t many of us who don’t live in a glass house, and we ought not confuse those stones we’re throwing with the skeletons we’ve got in the closet. (Pause briefly for the image of irony-deficient internet movie-nerds throwing skeletons from glass houses.)

DEMOLITION MAN is one of the more excessive and over-the-top blockbusters ever to come from producer Joel Silver (which is saying something), at a time when I couldn’t get enough of what he was selling — LETHAL WEAPON, PREDATOR, ACTION JACKSON, DIE HARD, ROAD HOUSE, LETHAL WEAPON 2, DIE HARD 2, RICOCHET, THE LAST BOY SCOUT, LETHAL WEAPON 3 — you get the picture? I was also getting deeper and deeper into a major comic book habit, which made DEMOLITION MAN the perfect storm. It’s certainly one of the more blatantly comic-booky pictures to emerge from that the late-80s/early-90s action/sci-fi heyday. 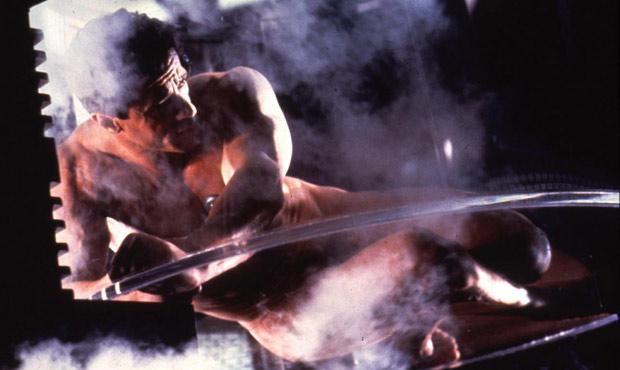 A huge part of that comes from a stable of screenwriters which most notably featured Daniel Waters, who had written THE ADVENTURES OF FORD FAIRLANE for Silver and BATMAN RETURNS for Tim Burton, but whose most notable credit will probably always be HEATHERS, the darkest and wickedest of the 1980s teen movies. Daniel Waters’ endlessly satirical mind could have plenty to do with the cynical streak which runs through DEMOLITION MAN. Just look at the naming of the characters — John Spartan, Simon Phoenix, Edgar Friendly, Lenina Huxley, Associate Bob, Alfredo Garcia, Dr. Raymond Cocteau, etc.  Barring Warren Ellis having zipped back to the early 1990s in a time machine, these names are conspicuously original and witty and/or comical and cartoonish. 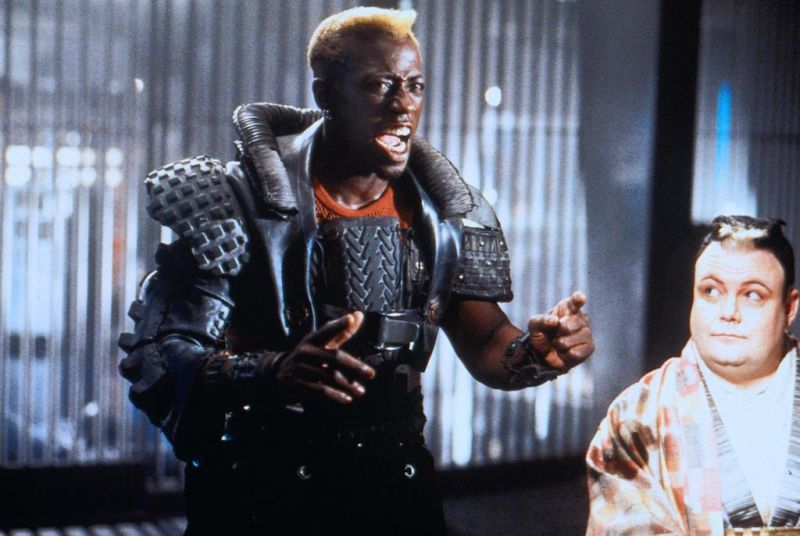 The thing that makes DEMOLITION MAN such a bizarre anomaly is that it is an exact blend of interesting dystopian/utopian science-fiction commentary and gratuitous action-movie idiocy. It’s almost as smart as it is dumb.  It’s like a kid took two flavors of Play-doh — clever and moronic — and smooshed them together. Clearly this could only have been a collaboration, directly or indirectly, between Daniel Waters and Sylvester Stallone. 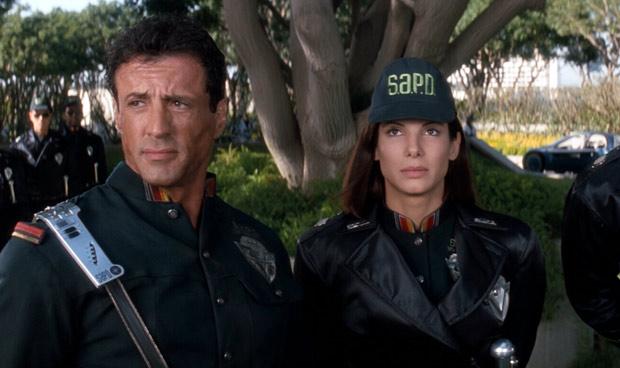 Stallone plays the aforementioned John Spartan, a supercop who is cryogenically frozen and then thawed decades later to help stop an old enemy, Simon Phoenix (Wesley Snipes), who has been thawed out before him. Both men were frozen in a cryogenic jail, Spartan wrongly, because that was the way violent crimes were prosecuted in the 1990s. (Check your history.) When Spartan does his Rip (not Rob) Van Winkle and re-enters society, he finds that things are different: No one says bad words, physical contact is illegal, crime is non-existent, and Taco Bell is a fine-dining establishment swank enough to make Nobu look like, well, Taco Bell. Note: This came a decade before IDIOCRACY! About as tough as the cops of the future get is a young, mega-cute Sandra Bullock, bright-eyed and enthusiastic — not yet to unleash a few dozen terrible movies upon the unsuspecting face of mainstream American cinema. 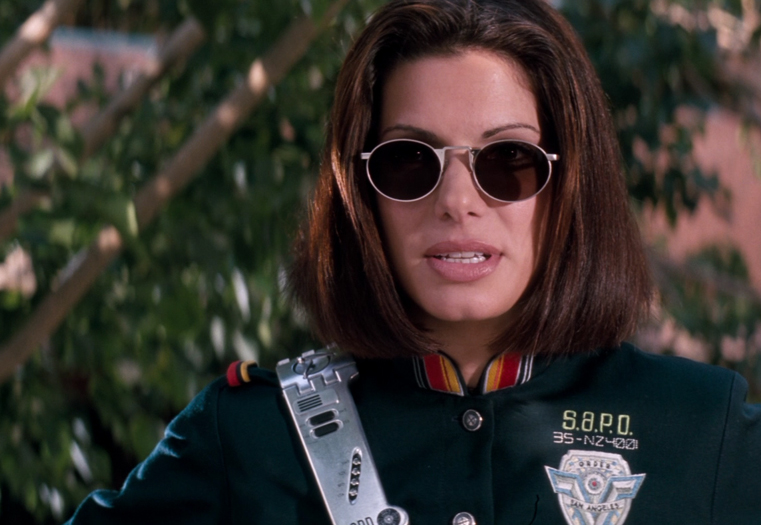 Stallone isn’t nearly as suited for comedy, but even that works in a way, since he feels like a bull in the china shop of manners.  This movie is also cinematically significant as being the first time Stallone demonstrated his affinity for wearing a beret, which he later put to use in three EXPENDABLES movies and counting. 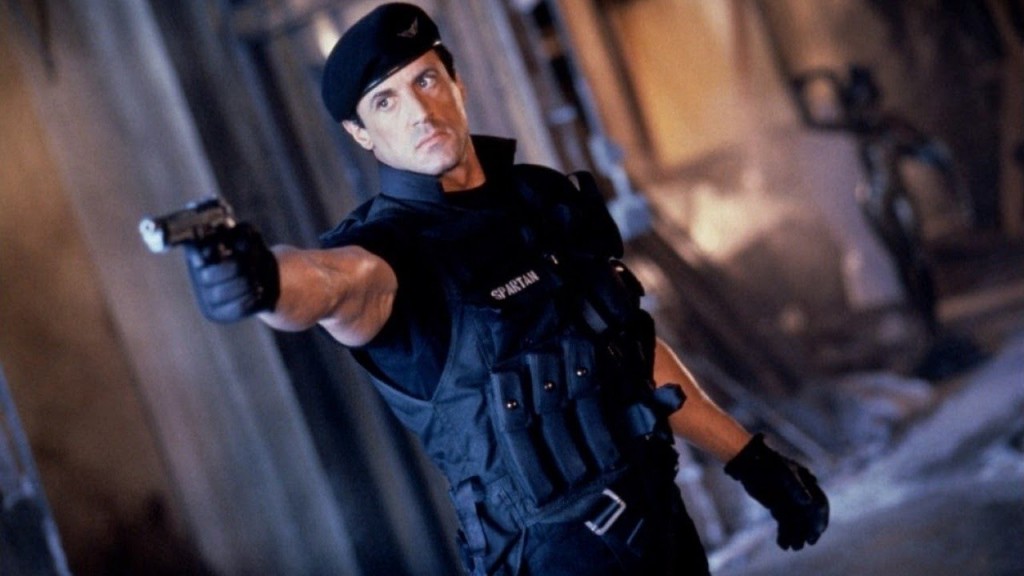 I make no arguments for DEMOLITION MAN as some kind of lost or under-recognized classic.   It has the kind of inconsistent tone that suggests major differences from script to screen (this is reportedly not uncommon with Sylvester Stallone).  My uneducated guess is that Daniel Waters’ script was probably somewhat better than the movie, which is goofy, but fun.  The director, Marco Brambilla, has a mysteriously truncated IMDb filmography, and seems to have abandoned features entirely for music videos, apparently working as an abstract video artist — honestly his site is kind of awesome. 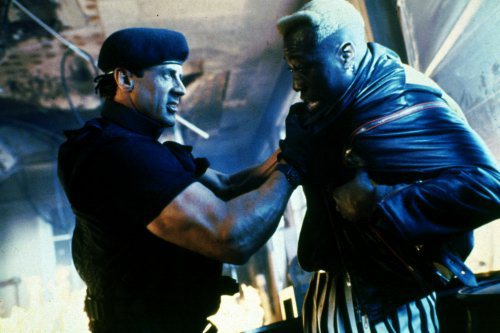 As for me, I haven’t watched it in years.  I think if I were to watch it now, I would still like it, but not for the exact same reasons.  When I was a kid I thought DEMOLITION MAN was awesome enough to pay to see four times in a month.  Today I’m just a little more discerning, and not nearly as outwardly enthusiastic — although, full disclosure, I have seen FURY ROAD three times theatrically so far this year. 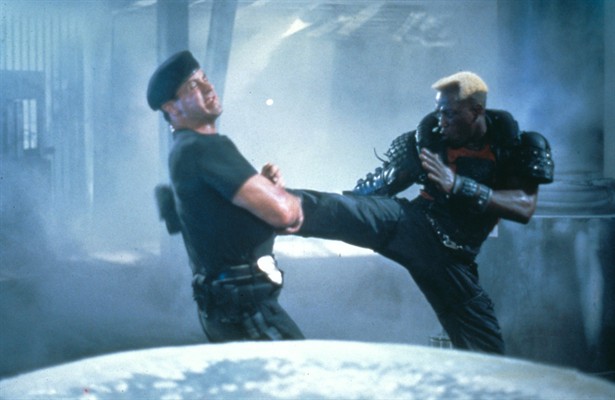 But I tell you these things because I believe in keeping my skeletons out in the open, especially if I’m ever caught throwing stones. My skeletons live happily in the glass house. It’s more like a greenhouse, where the skeletons can do gardening, which as we all know, skeletons love.