What do you think about when you watch an exploitation movie? Speaking for myself, it could be all kinds of things, many of them hardly at all related to what’s happening on screen. Nobody’s sitting through an exploitation movie because of the thoughtful story, the relatable characters, the masterful direction, the SAG award won by the ensemble cast. Cinema can be art, but we’re talking about a lawless, rude, sometimes vile realm of film where the elements that brought you to bear witness do not play to your noblest human instincts. 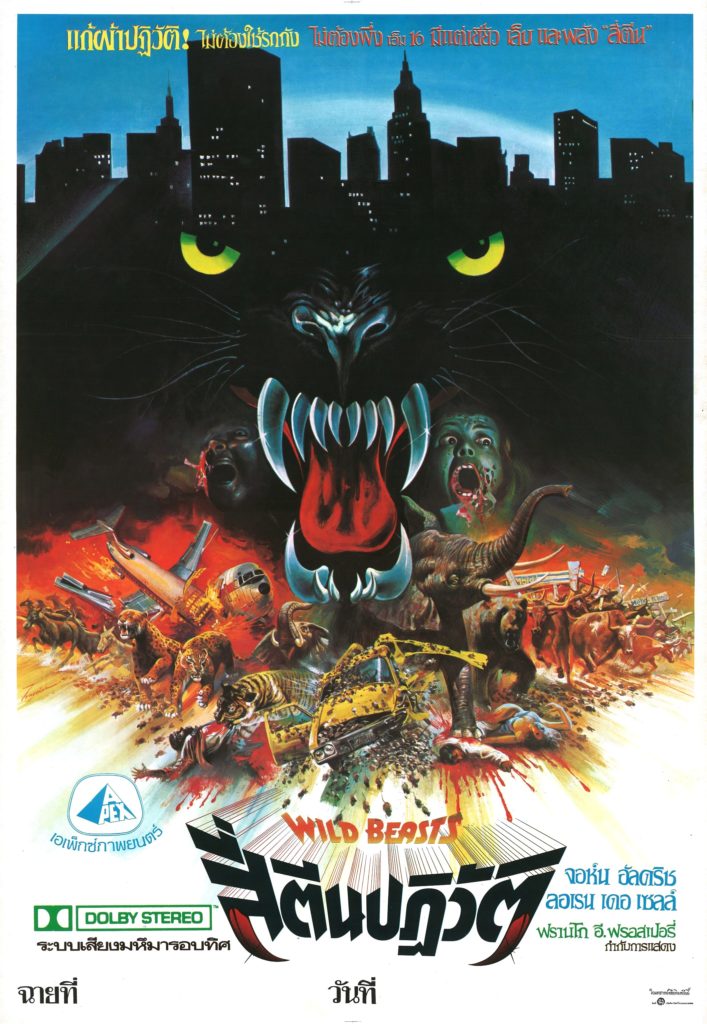 WILD BEASTS is the very definition of an exploitation movie. It’s a movie about zoo animals getting exposed to PCP through the city water supply and going on a murderous rampage. That means early on, a young couple who are hooking up in a parked car are beset upon by drug-crazed sewer rats who nibble them both to death. The young lady is topless, naturally, just so you get your gore with a side order of pervy voyeurism. Later on, when the authorities discover the grisly scene, most of the rats are flushed away by water from fire hoses, and those that remain are torched.

By every last account, very little consideration was paid during the making of the movie to the safety of the animals used in scenes like these. So it’s fair to assume that when we see rats frantically careening around the frame with their pelts on fire, that’s not a new breakthrough in untrained rodent acting. That’s a street-rat massacre. 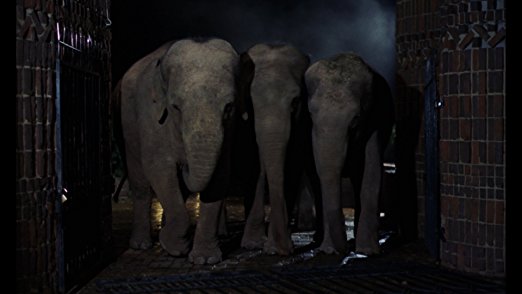 WILD BEASTS has many more sights to offer, many of them absurdly irresistible — a herd of elephants smashing through a brick wall and stampeding through a traffic jam; a high-speed chase involving a cheetah stalking a woman driving in a yellow VW Beetle (who listens to a radio station that plays bizarre Sugar Hill Gang rip-off music); a service dog turning on his blind owner that could easily have come from a Hitchcock movie if it weren’t so choppily directed. And taking place in early-‘eighties Europe as it does, the movie’s lead human protagonist looks like Yanni, which is hilarious.

As a moviegoer for whom a primary motivation is a desire to see things onscreen I haven’t seen before in life, WILD BEASTS is very difficult to discount. The cheetah scene in particular is weird, funny, stupid, in some shots inspired, and entirely original. The cheetah actor doesn’t appear to be close to the car crashes and explosions that result from the chase, and from doing a little research into the film it appears there were experienced trainers on set — so it’s possible to watch this sequence without too much concern for the cheetah, or for the human actors. But in this film, as in so much exploitation cinema, there are slow stretches in between the money moments, and that’s where the mind begins to wander.

Here are some questions that passed through my head as I was watching WILD BEASTS — feel free to judge me and my thoughts as you see fit:

Is this really what zoo animals act like when they’ve ingested PCP? Doesn’t it cause hallucinations in humans? It appears to just make the animals meaner than they would have been otherwise. The dog and the rats and the elephants turn into stone killers. The cheetah doesn’t seem too worked up at all, honestly — he just goes after the lady like she’s a gazelle. Does PCP make cheetahs think humans are gazelles? What would animals be like if they used other human drugs? If the cheetah was stoned on weed, would he just be really chill? Is that what the Cheetos guy’s deal is? Basically, if WILD BEASTS is to be believed, PCP gives all the animals the mega-munchies.

More seriously: Why doesn’t it bother me much to watch large numbers of human characters getting killed off in movies like this one, and so many other horror, action, and animal-attack movies I’ve seen? Is it because I know they didn’t die in real life? Why does it bother me so much to see animals injured onscreen, even when I know all safety precautions were taken? And why does it bother me so much more to know they may have been hurt for real? Do I really care that much more about every species but my own? 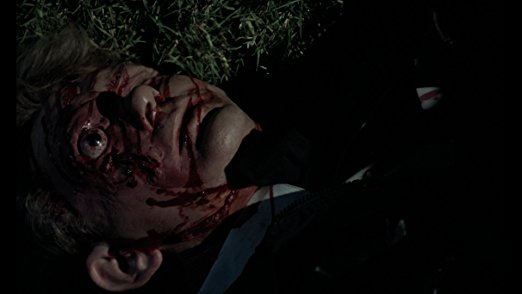 On the flip side, pretending for a moment I’m not an overly committed animal lover: Why should it bother me to know animals were hurt in a movie from 1984? Even if they lived long happy lives, it’s not like most of them would still be alive in 2018. (Possibly the elephants, but that’s about it.) Why shouldn’t sewer rats get to go out in a blaze of cinematic glory? What else were they going to do with their short sewer lives?

It’s not like WILD BEASTS is the only movie where animals were injured or killed in the process. To take a recent example: One horse died and another was injured on the set of last year’s THE FATE OF THE FURIOUS. Can I watch that film with that knowledge? If so, why is it worse to watch WILD BEASTS, where animals are harmed onscreen rather than off? And how about movies in which not all of the filmmakers managed to survive the process? A stuntwoman died on the set of the upcoming DEADPOOL 2. No footage of that tragedy will be on screen, but even knowing what I know, can I, should I, watch the finished movie?

What movie could be worth a life, human or animal? WILD BEASTS isn’t. WILD BEASTS probably shouldn’t exist. But it does, so here I am reckoning with it. I don’t have answers to most of the questions I posed here, but they were worth raising, for me anyway. I can promise you I didn’t have any of these thoughts during any of the far classier, award-friendly movies I saw in 2017. And aren’t a couple of these questions tapping into broader philosophical ideas that many human beings could stand to reckon with themselves at some point?

Prestige films work within the boundaries, and reap rewards and adoration for it. Exploitation films define the boundaries. Sometimes we don’t stop to consider our own personal values until we’re confronted with extreme violations of them. And if all that sounds pretentious, well, WILD BEASTS itself is a film made with enough pretension to open on a florid quote from a speaker who most likely doesn’t even exist.

“Our madness engulfs everything and infects innocent victims such as children or animals.” – Francis Thrive.

There’s a whole lot “wrong” about WILD BEASTS, but this is entirely a true statement. 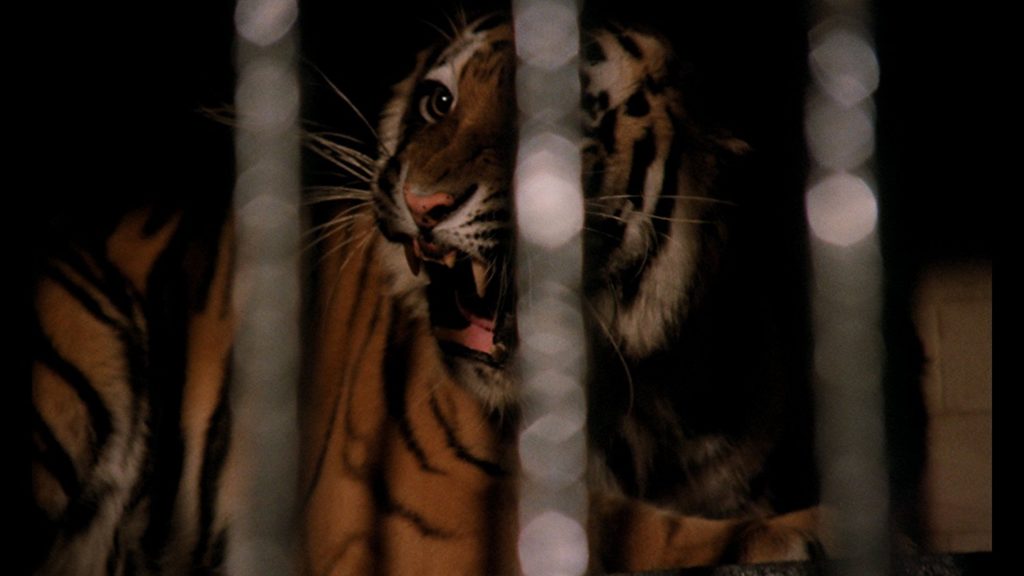 Daily Grindhouse is co-sponsoring a 35mm midnight screening of WILD BEASTS at Chicago’s beautiful Music Box Theatre on Friday, January 26th and Saturday, January 27th! Our own Mike Vanderbilt hosts the screening — DO NOT MISS THIS EVENT, CHICAGO! Click here for tickets!