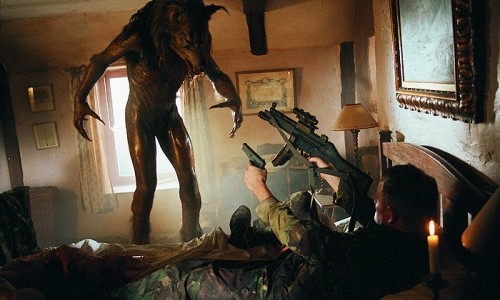 So I don’t think it’s too drastic to call DOG SOLDIERS one of the best werewolf movies of the new century. It may not even be much of a compliment: The competition for the title is pretty sickly. DOG SOLDIERS isn’t a great werewolf movie, but it is a good one, and that alone is hard enough to manage. It’s a fun little movie that maximizes a limited budget, and it was certainly one hell of a calling card for writer-director Neil Marshall.

The pitch is perfect in its simplicity: a small squad of British soldiers on a training exercise in an isolated forest are assailed by a pack of werewolves. The DVD cover blurb suggests that it’s ALIENS by way of PREDATOR, and while those are lofty comparisons, DOG SOLDIERS actually doesn’t suffer too badly for it. (The blurb also invokes JAWS and AN AMERICAN WEREWOLF IN LONDON, but those comparisons are actually less grounded.) What DOG SOLDIERS has in common with those two movies is a smart and methodical build to the central conflict, a plot structure that becomes a relentless siege movie once all the pieces are in place, and a platoon of main characters that are (for the most part) distinctive, likable, and charismatic.

In its opening sequence, DOG SOLDIERS begins with a mixture of camp and sincerity. A pair of campers sharing a romantic getaway are stalked and consumed by an unseen beast. (We all know going into it that it’s werewolves, and the movie is respectful enough of its audience not to pretend otherwise.)  In one of the movie’s campier moments, the werewolves use the zipper to open a tent full of tasty campers, instead of just ripping into the bag.

We then meet the protagonist, Cooper, (played by Kevin McKidd, a.k.a. Tommy from TRAINSPOTTING), on a job interview for British Special Forces. He fails, because at the end of the exercise, he refuses to shoot a dog, at the somewhat obtuse behest of the menacing Special Forces commander (Liam Cunningham) who you just know you’ll see again before the movie’s over. The whole “kill the dog” thing is almost as campy as werewolves using zippers, and it’s a little too on the nose thematically. (We know Cooper is going to ultimately prove himself by shooting some very big dogs.) Getting all the constructive criticisms out of the way, I must also point out that the orchestral score is extremely corny and the “sweeping” helicopter shots that establish the forest won’t put Peter Jackson out of business. 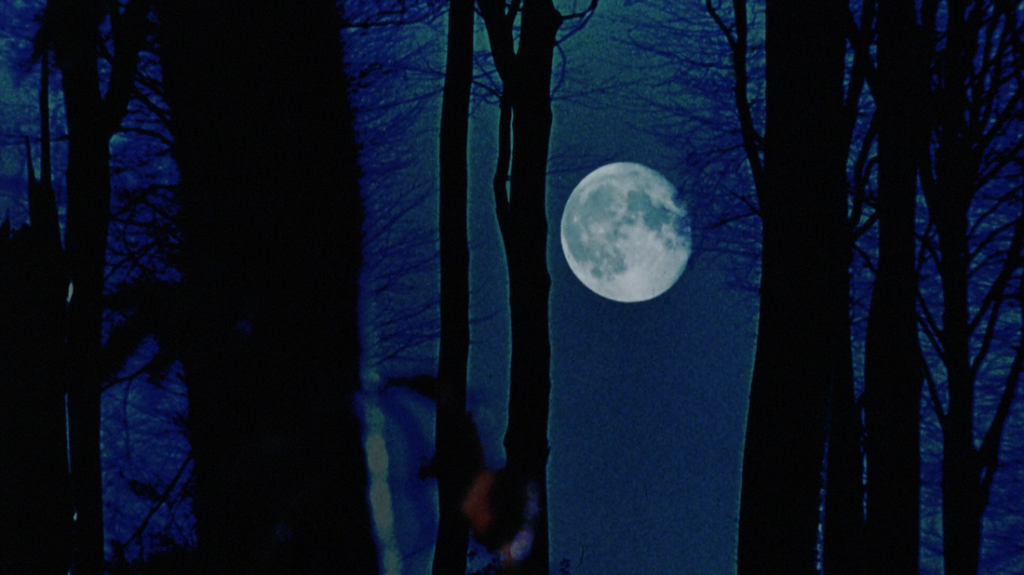 But all that out of the way, the movie zips along from there. We’re reintroduced to Cooper a month later, having returned to his less distinguished band of grunts. We meet the team, and they seem like a decent bunch of guys, particularly the Sergeant (a gruff-voiced character actor named Sean Pertwee who is maybe the most likable guy in the movie) and a joker named Spoon (Darren Morfitt). DOG SOLDIERS is the kind of movie where the characters are killed off in order of likability, from least noticeable to most missed, and it’s the kind of movie where you notice that, but don’t mind too terribly much. 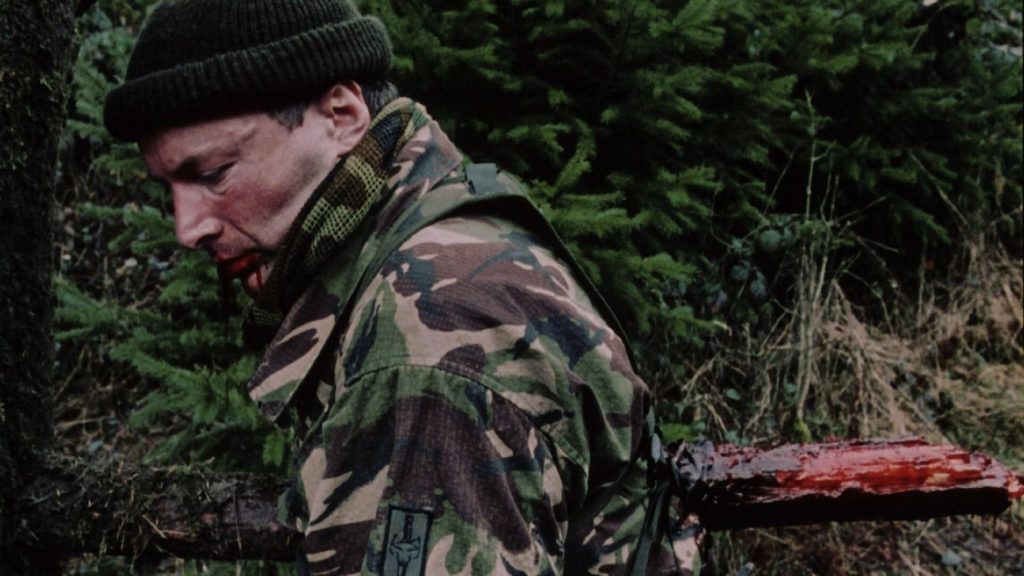 The guys touch down in the woods with rubber bullets – they’re running a pro game of tag with that Special Forces unit – and are quickly made to regret it when evening begins to descend. Some fast-moving animals begin to tear the team apart, literally, and I think that director Marshall very efficiently withholds glimpses of the werewolves, while showing just enough that we know what they are and we know to fear them. A couple of the initial kills are surprising in what we’ve come to learn from his subsequent movies is Marshall’s way, and one character somehow survives his initial werewolf encounter, only to spend most of the rest of the movie drunk with his guts hanging out. (Now, at last, you know whether or not this movie is for you.) A young woman arrives in a Jeep just in time – as the sun goes down entirely and the werewolves come out in full force, she drives them to the only farmhouse for miles, where the remaining soldiers make their last stand. Fellow werewolf aficionados have probably already devoured this flick, but in case you haven’t, you want to know just one thing: How do the wolves look? And I have to tell you honestly – I think they look great. The leading reason why so many werewolf movies are so bad is because the practical effects are so hard to make convincing. (True werewolf-movie fans don’t even rate CGI – that stuff just hasn’t worked once yet.) 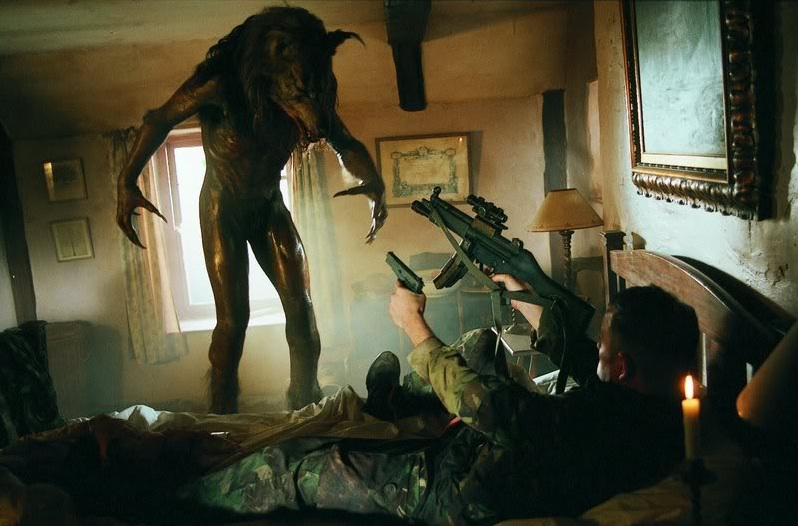 The werewolves of DOG SOLDIERS are not just interestingly and originally designed, but they are wisely deployed by the filmmakers – not seen often enough or long enough to see the limitations of the suits, and the weird, awkward movements of the suits which we do manage to see somehow make the wolves more believable and freaky. Feel free to disagree with me, but I stand by my appreciation. 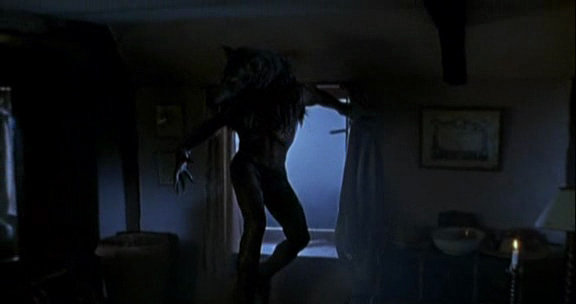 DOG SOLDIERS never reaches the heights or frights of AN AMERICAN WEREWOLF IN LONDON, since to date, no werewolf movie has. This newer movie has got a couple unnecessary and predictable plot twists and a couple cringe-inducing moments, such as the moment towards the end, right after one such twist, where one character just stands and spews out bad werewolf puns at the other characters. [“It’s that time of the month!”]  But it has energetic filmmaking behind it, along with performances that are way better than the werewolf average, and lead monsters that don’t disappoint. I’ve seen DOG SOLDIERS three times now, which is more times than I’ve seen any werewolf movie besides AN AMERICAN WEREWOLF IN LONDON (the numbers of viewings of which, I’ve lost count.) If you like werewolf movies as much as I do, I’m so sorry for your affliction, but give this movie a spin anyway.

Buy DOG SOLDIERS from Shout! Factory or by clicking this icon: