It’s notable that, more than in any other genre, the horror anthology works. These short bursts of terror have been creeping audiences out for decades, thriving in the ‘70s with the Amicus films and continuing throughout the ‘80s and 90’s, when filmmakers who grew up with E.C. Comics gave audiences the CREEPSHOW films and weekly doses of TALES from the DARKSIDE and THE CRYPT. TRICK R TREAT and the oft overlooked TALES OF HALLOWEEN continued this tradition into the 2000’s, blending terror, laughs, twists, and turns into twisted morality tales. NIGHTMARE CINEMA is a memorable, if at times half-cocked anthology flick that features shorts from Garris along with horror/comedy luminary Joe Dante, Japan’s Ryuhei Kitamura, Britain’s David Slade, and Cuba’s Alejandro Brugues.

Things literally get off to a running start with Brugue’s entry, “The Thing In The Woods,” featuring a young lady on the run from an unseen slasher. “The Welder,” as he comes to be known, is clad in a costume as memorable as any of the big ‘80s slashers, cribbing from MY BLOODY VALENTINE and even DON’T GO IN THE HOUSE. “Woods” is essentially the third act of a slasher story, but a bonkers twist smartly subverts the genre by blending in sci-fi elements and slick storytelling trickery. There’s so much bonkers in Brugue’s entry that it at times feels like it could have been directed by Joe Dante, whose short is next in the rotation.

A darkly comic plastic-surgery-gone-awry story, Dante’s entry plays like The Twilight Zone meets Nip/Tuck, and even features Nip/Tuck guest star Richard Chamberlin in a wonderfully charming role as a plastic surgeon with a god complex. This is the best thing Dante has directed in years, and his confidence as a director shines through: The short is visually impressive, featuring a ultramodern hospital, and a terrific sense of fun about it. Dante’s entry certainly features the most Vault Of Horror-esque twist of the five shorts, and sharp twists are some of the most memorable parts of horror anthology films. Overall, the twists in NIGHTMARE CINEMA sometimes come off as half-cocked, as if maybe one more draft would have tightened things up, but the first three shorts have this sort of manic energy about them that is easy to forgive.

Kitamura’s is a stand out entry that plays like SUSPIRIA BABIES-cum-nunsploitation. It’s got cool monsters, creepy kids, and a priest that knows how to wield a sword. If you love THE OMEN series but maybe felt that THE FINAL CONFLICT was a little underwhelming (or ever wanted to see Father Merrin have a sword fight with Pazuzu) Kitamura’s wild, gore-filled entry is the religious horror movie you’ve been waiting for.

Five shorts in a horror anthology is a dangerous gambit. I’ve always wondered how editors (or producers and scriptwriters) decide how to sequence these outings. David Slade’s black-and-white entry is the strangest of the bunch, and slows NIGHTMARE CINEMA down a bit. An ultra-weird mediation on mental illness, it’s a head scratcher, but is a welcome respite from the manic pace of the film.

The final short comes from main man Mick Garris. “Dead” has the most heart of the five shorts, and never sacrifices thrills and gore in this at times touching tale. “Dead” would have made a terrific episode of Amazing Stories, the anthology series Garris did with Steven Spielberg in the ‘80s. A young man watches his parents get murdered and fights to stay alive even when otherworldly spirits are pulling him into the light. Meanwhile, in the real world, the man who killed his folks is trying to finish the job. Some nice, quiet performances round out the whole thing. 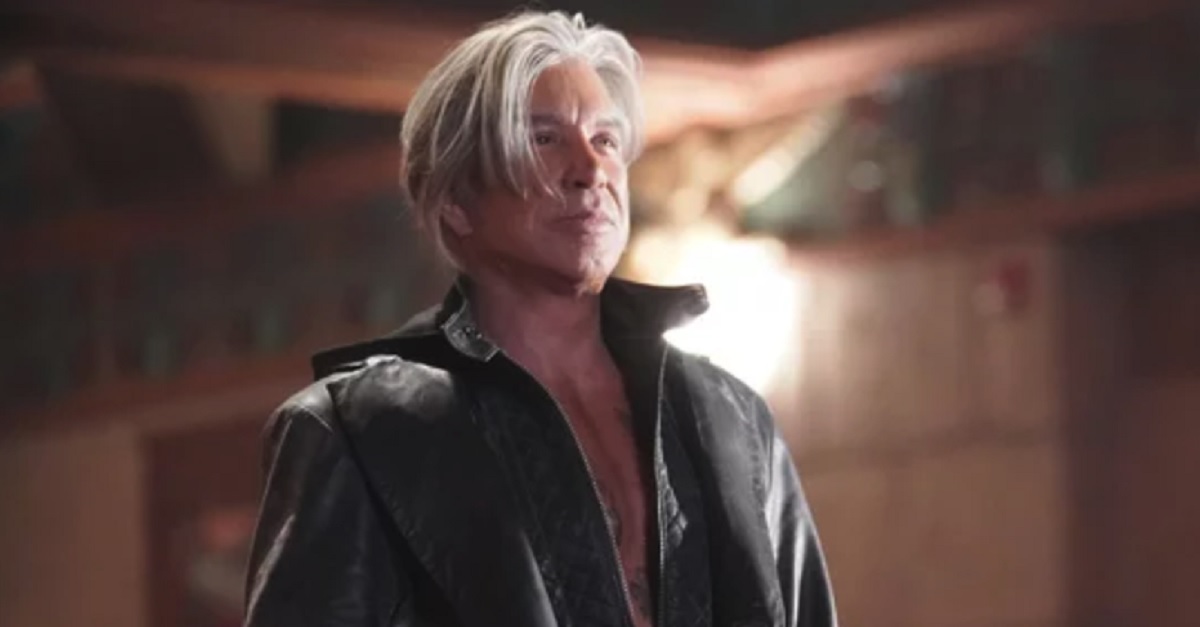 Tying all these stories together is a wraparound tale that features the main characters of each tale wandering into an abandoned movie house (the titular “nightmare cinema” and encountering “The Projectionist” played by (in a bit of inspired casting) Mickey Rourke.

NIGHTMARE CINEMA runs on energy. From the word go, it’s high-octane entertainment, wonderfully weird at times, ultra-gory, and really, just a lot of fun. It deftly blends scares, gore, laughs, and even a little bit of heart. As with any anthology, audiences will argue their favorites, but NIGHTMARE CINEMA, despite some half-baked ideas, should thrill overall.