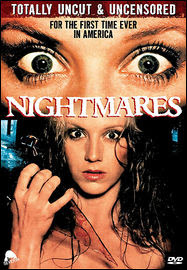 NIGHTMARES has been around in one form or another since 1980. I saw a heavily edited version in the late 80’s when it was called STAGE FRIGHT. This film has been plagued by censorship and title confusion since it was released but thanks to Severin Films, it is finally got the release it deserves: uncut and uncensored.

John Lamond was known for cheap sexploitation films when he made NIGHTMARES. He got the idea after seeing HALLOWEEN, appreciating the way that film was made. Even before a script was complete he began asking for money, showing up to meetings with a script for THE EXORCIST, hoping nobody asked to take it home to read. He got the cash, a decent cast, and directed one of my favorite ozploitation slasher films around.

Jenny Neumann stars as Cathy who as a little girl woke up in the backseat of the car while mommy had fun-time with a stranger. Cathy freaked, mom zigged instead of zagged, and out the front window goes mom slicing her throat in the process. This doesn’t set Cathy up for a life of success but this is a horror film, she wasn’t going to have success anyway. Cathy changes her name to Helen and makes use of her insanity by becoming an actress in the local theater. Coincidentally, this is when members of the cast start turning up dead of stab wounds, usually after fornicating.

NIGHTMARES isn’t a perfect film. The killer POV shots don’t work very well, the identity of the killer is revealed way too early, and some of the scenes in the film just don’t make a lot of sense. Still, this a no holds barred slasher film that is dirty, trashy fun full of the genre staples we all want: nakedness, pointy objects with fleshy points of entry, and blood by the gallons.

Quick note: If I am ever backstage getting it on with a hot actress (happens more than you think…..no it doesn’t), and I hear glass breaking, I don’t care if you are Halle Berry, I am zipping that shit up and bolting like an erection in a cold pool. But I digress…