ARE HALF THE BATTLE, GO MOE! 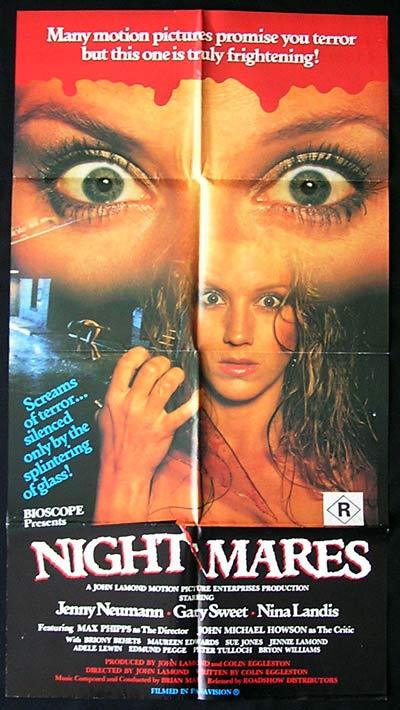 The theatre, pretentious spelling intentional, a place where the high minded elite go to enjoy a fine night’s entertainment to be amongst the crowd of your fellow man and to bask in the ambiance and sheer talent of the fine young actors and actresses on stage. To warm your hands in the glowing embers of these thespians while you absorb tales filled of hearty laughs and bleak sorrows. Or to just see some nekkid chicks getting slashed up REAL GOOD LIKE!

For the first time in the US, Severin Films brings us NIGHTMARES, a fucked up tale of death and one person’s quest to kill off sex. Young Cathy is a nosy kid! She peeps her mom having sex with such frequency you’d think she enjoyed it. Mommy does, in fact, have a great ass, so it makes sense. One night while out driving that bitch Cathy, who’s supposed to be asleep, ruins a perfectly harmless and fun heavy petting session. Sure they were going 50 MPH at the time (or should I say 65 KPH? Since this is Australian) and mommy was telling Bruce* to stop, but Cathy just had to go and break them up. With her FISTS!

Can I just use this moment to say that Cathy has some fucking superhuman strength! This little girl is no more than 8 or 9 maybe? Hit’s her mother’s boyfriend about ten minutes later in the film and damn near tosses him across the room; she’s the fucking SHE HULK! Get the Adamantium restraints boys, that’s the only way you’re taking her in!

Oh back to my point though, Cathy hits mommy and boy toy Brucie** so hard that that poor dear of a mother hits a parked car and practically decapitates herself being expelled out the windshield. What a waste of a great ass. This is the first of many especially bloody and brutal, glass related deaths, yes, I said glass related. Anyway, no-fun Cathy grows up and becomes prude, even-less-fun Helen (Jenny Neuman). Its fine they never explain to you that she changes her name; it’s supposed to be inferred by the audience. This is a movie about the theater, people, you can’t be expected to be handed all the answers! Helen joins the profession that all psychotic one-step-away-from-murder young ladies happen upon, she becomes an actress! What is it about the stage that lures the insane?

The guts (get it!) of the film take place during the course of rehearsing and performing the play. There’s a Killer loose and it’s killing anyone who shows any enjoyment out of physical affection. It kills a couple fucking in the alley, and during the course of the play’s second show, manages to kill the entire cast including the director AND the homosexual critic who hated the play. I would love to say that the critic was killed because he panned the performance but no, he was killed for coming on to one of the actors hoping to get a little lickie dickie from Bruce***.

NIGHTMARES (I like the name STAGE FRIGHT better) comes on like a freight train carrying just enough wood to get you half way there, yet manages to get you home by burning the seats. The second act is a little hard to sit through since there are no deaths; this is because there’s no nudity. But the beginning and the end more than make up for the mid film lull. Definitely one to watch with the friends…probably best to have a couple bottles on hand as well.

** a fairly uncommon variant on the well-known Australian name, Bruce. Didn’t mean to confuse you.

Drink up, we’ve got movies to watch!