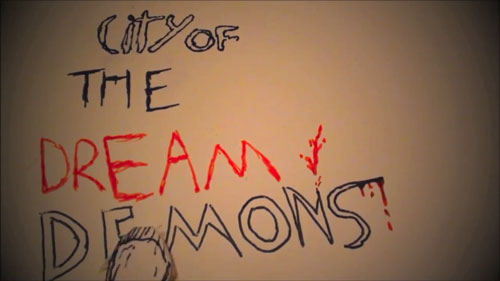 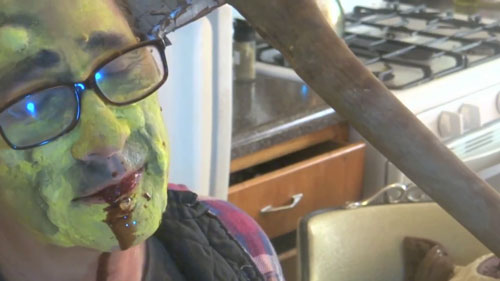 If you’re part of the increasingly rabid community of people who worship SOV and microbudget films and film-makers, then you’re likely already familiar with Johnny Dickie. He broke onto the scene a couple of years back with his anthology film SLAUGHTER TALES (2012), and has continued being both a prolific director of shorts (including a tribute to J.R. Bookwalter’s ROBOT NINJA), and a vocal proponent of the ultra low-budget aesthetic. He’s also an obsessive collector of VHS tapes, and has developed a friendly relationship with many of the directors who spearheaded the deluge of no-budget films in the late 80s and early 90s.

And he’s a teenager.

He started making short films when he was 12, and finished SLAUGHTER TALES when he was 14. VHS as a format was already on its way out when he was born, but he’s retained a passion for making imaginative – and profane – films that make clear visual references to the works that inspired him. His latest is CITY OF THE DREAM DEMONS, which is a ragged, amateurish mix of incomprehensible plot and budget gore that still manages to be indecently entertaining thanks to Dickie’s willingness to embrace the “anything goes” mantra of his influences. Your ability to enjoy the film will rely greatly on your fondness for amateur auteurs like Todd Sheets, but if you’re willing to looks past some glaring flaws – and there’s many – you’re in for a good time. 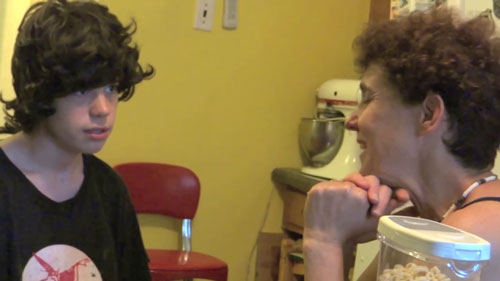 At least the plot is fairly easy to follow. When he was just 8, Tommy (played by Dickie) was knocked unconscious during a soccer game and fell into a coma, during which a tunnel was opened to a dream dimension which allowed a number of “dream demons” to escape. These demons would go on to murder Tommy’s father, before – I guess – being stopped. Now Tommy is a teenager, and after being (confusingly) knocked out cold once again during his birthday party, the demons start appearing once again and begin slaughtering the denizens of Philadelphia – as well as Tommy’s friends. It’s up to Tommy (and his best friend Spat) to take on the head demon Pazazus in a final, bloody confrontation.

Throughout the film we get constant mockery of Dickie’s SLAUGHTER TALES (dismissed as a birthday present and later used to torture a demon), bad wigs (which appear to be covering up some continuity issues due to a haircut), glitchy video, excessive – often laughingly poor – gore, and a collection of performances that range from disinterested to manic. There’s some nice photography, and a rocking soundtrack (that too often covers up the dialogue), but the name of the game is “let’s put on a show”, and Dickie is familiar enough with his audience to deliver exactly what they want. His performance is, by far, the most committed, and despite the surprisingly large number of characters, this still is, in many ways, a one man show. 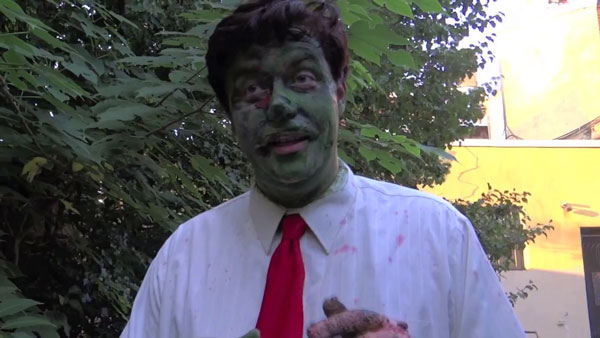 The film’s best moments are its throwaway lines and gags, including Tommy’s mother – who vanishes for 90% of the film – stating “I am a really bad mom” after she allows her son to battle Pazazus, or Tommy’s friend who seems more interested in masturbating to a VHS copy of Joyce James’ DRILLER than attending his birthday party. It’s all quite intentionally low-brow, but there’s also a smidgen of heart at its core; with Tommy wanting to redeem his father, and later getting help from the sullen, self-harming dream version of himself. While it doesn’t explore these ideas in detail, there are hints of a larger mythology which represents some admirable ambition; even if most of it doesn’t quite come off.

Calling a film that so clearly worships SOV “shoddy” isn’t really an insult, as while CITY OF THE DREAM DEMONS is often technically inept, it wears its threadbare nature like a badge of honor. And unlike most of its obvious influences, it’s very rarely boring, thanks to a combination of enthusiasm and big- often baffling – ideas. Those unprepared for the limitations of no-budget features might find themselves quickly frustrated, but fans of the golden age of shot-on-video  will find plenty here to embrace and adore. With a little more polish, Johnny Dickie could probably find a much wider audience.. But, then, that would be missing the point.