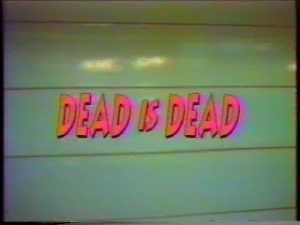 DEAD IS DEAD is awful. No reason to mince words or bite my tongue. This is a poor film from top to bottom, and I find myself at a loss as to how something so clearly shoddy and unfinished not only got distribution, but has spawned a Director’s Cut (which incorporates footage from a proposed sequel), as well as a 2011 reconstruction that incorporates footage from public domain horror films. Michigan filmmaker Mike Stanley didn’t create DEAD IS DEAD as a personal affront to me, and I’m sure Mr. Stanley – who wrote, edited, produced, starred, and directed – worked very hard to make this as good as he possibly could. Unfortunately, this still leaves a film that feels painfully padded despite being barely over an hour, and features a plot that I just can’t figure out despite almost certainly paying more attention to it than anyone not directly tied to the production ever has. I wanted to find something to like here, but it’s seriously an artless, ugly, half-finished mess of a film.

Eric (Stanley) has just returned to his home state of Michigan after leaving years earlier following the death of his institutionalized brother in a fire. Eric had borrowed some money to help his brother out, but instead used it on drugs and didn’t pay it back, so the guy he borrowed from burned down the institution. Got that? Because things are about to get even more stupid. Eric goes to the middle of a field to retrieve some money he has stashed, and almost immediately gets his hand eaten off by some (never clearly explained) creature. He wakes up to find himself cared for by the friendly ex-nurse Laura, who had worked at the Institution before it burned, and who she smuggled out drug Doxitol – a re-animating agent that can grow back severed limbs and even bring the recently dead back to life. She apparently doesn’t see how such a drug might have some value, and the two share a brief attraction. 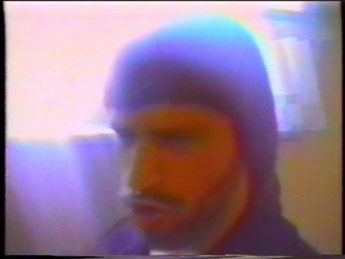 Eric steals/is given the drug, which he immediately attempts to sell to the nerdy gangster Tony (Rob Binge who also composed the synth soundtrack), in exchange for having his debts erased. Instead, Tony attempts to have Eric run over in the closest thing this movie has to an action scene. Eric is understandably upset, and shoots Tony a few times until he reveals the location of Doug Hamil – apparently the brains of the operation. Hamil is in New York, which leads to endless scenes of the actor walking around the city, visiting Time Square, riding the ferry. Production value! Eric confronts him in his hotel room looking for the missing stash of Doxitol, which Hamil reveals is actually in a school back in Michigan. The irony! Thanks for wasting our time, Doug!

A few seconds of actual news footage shows us that Eric’s plane crashes on the way back (leaving Laura very sad and/or confused). But he’s now powered by Doxitol, so he just hops up from the crash (aka some dirt, caution tape, and a small fire) and heads for the school. But it was a trap! Maybe! And he has something (his heart?) pulled out of him by a mysterious creature before being beaten by Tony and left for dead. But, despite the title.. dead AINT dead and he gets his revenge by killing Tony (a couple of times) and going after the dastardly Doug (actual quote: “I advise you to go out and get baptized, see a priest, pray for your sins, ’cause Santa Claus is comin’ to town and he’s gonna kick your ass!”). Now, I thought I was paying attention, but apparently Doug just dies for some reason. I think the implication is that he had a bad batch of doxitol, but the editing is so poor it’s hard to tell.

This sends Eric into a deep depression as he throws the formula for the drug into a lake before – I believe – attempting to commit suicide. Instead he runs into Laura at the bus-stop, and goes to see a priest again to explain everything that has happened up to this point, before killing himself. No, I don’t know why. It seemed like everything worked out for him, but I guess the side effect of doxitol is extreme depression. 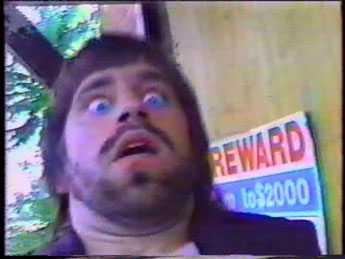 If that plot summary was confusing, it’s nowhere near as baffling as actually watching this tedious, near-unwatchable mess of a film. I can ignore the fact that it appears to have been transferred from a fourth generation VHS tape. I can ignore Stanley’s ridiculous bowl-mullet haircut. I can ignore the entirely superfluous New York footage. But I can’t ignore the bewildering story-line, wretched acting and total lack of coherency.

The direction (by Mike “Orson who?” Stanley) is strictly of the plant-the-camera variety, with the tiny cast (only four people!) often appearing to have been filmed at different times. Characters interact, but are rarely in the same frame together. Stanley is obviously from the “tell, don’t show” school of filmmakers, as most potentially interesting scenes (like, say, the plane crash) happen off-screen. I will give Stanley some credit for making early-90s Michigan appear to be the most unpleasant, post-apocalyptic looking place I’ve ever seen. I try to give points for effort – we’re not quite in the depths of HIP HOP LOCOS territory – but there’s so little material here that has any potential.

Stanley’s acting – where he spouts such classic lines as “you look and sound like a penis with dry heave” – isn’t quite as bad as his direction, though his goofy look prevents him from ever looking as bad-ass as he wishes. Rob Binge as Tony and Dave Hildwein as Doug Hamil appear to be reading their lines from a sheet of paper which may or may not have occasional words misspelled, and both are about as menacing as children’s cough syrup. It’s hard to gauge Connie Cocquyt’s performance as Laura, since she vanishes from the film at the half way point only to reappear confusingly in the final few minutes. I’ll just go with “bad” to be safe. 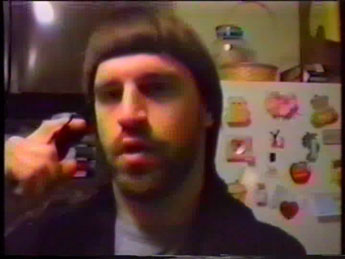 As knievelcrash reminds us in the IMDB review, “director Mike Stanley doesn’t throw the gore in your face”, and that’s absolutely correct. In fact, violence is used minimally in a way that implies that perhaps it would have taken time and/or money to put more of it on the screen. There are a few shots of a zombie mask before Eric gets his hand munched, though unless organ meat and Halloween props are your cup of tea, I wouldn’t expect to be too impressed by the effects on display.

I’ll leave open the possibility that the DEAD IS DEAD Director’s Cut improves the film by filling in the many, many gaps, but it’s hard to believe  While this film doesn’t really have the potential to be good, more footage might actually help the plot make a little more sense, though its brevity is one of the few redeeming features of the film as is. Far from fun or amusing, Dead is Dead is simply tedious, and better left buried.