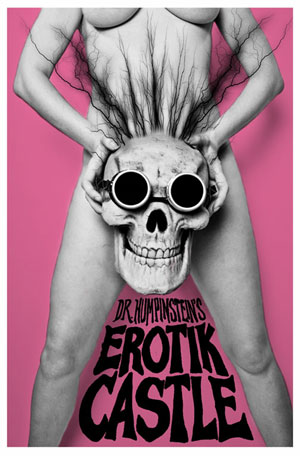 What’s in a name?

The expectations I had going into Andrew Shearer’s DR. HUMPINSTEIN’S EROTIK CASTLE were a result of watching dozens of ultra low-budget features which have relied heavily on their ridiculous, exaggerated titles. It’s already so difficult to get noticed in the overstuffed horror genre, so slapping on a title that appeals to the base instincts of fans – BLOODSUCKING BABES FROM BURBANK, BARELY LEGAL LESBIAN VAMPIRES, SUBURBAN SASQUATCH, CATHOLIC GHOULGIRLS – is a cheap way to draw the eye, even if it inevitably leads to disappointment when the production can’t possibly live up to the moniker. What separates Shearer’s film is that while the title provides a jumping off point, it’s just the beginning of his intentional intent to subvert expectations. His work is fun, body-positive and – yes – even feminist. It’s not going to appeal to all genre fans, but I give him full points for trying something original in a genre obsessed with the same old tropes. 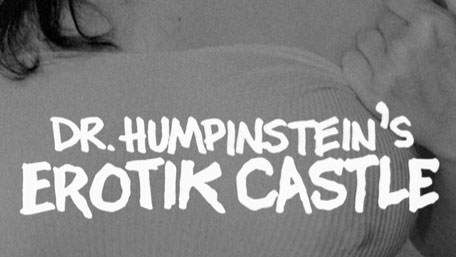 Shot in stark black and white, DR. HUMPINSTEIN’S EROTIK CASTLE begins as a tribute to 50s juvenile delinquent films before morphing into a bizarre mash-up of early 60s exploitation, horror and burlesque. Conservative parent Doris Wishman (Audrey Page, with the character obviously named after the legendary trash director) discovers an “erotik” magazine (named after Shearer’s GONZORIFFIC production company) among her daughter’s things and decides to confront the female biker gang that provided it to her. They direct her to the castle of DR. HUMPINSTEIN – which makes some great use out of children’s castle wall-paper – where she encounters the titular scientist (ethereally played by Kert Rats) and his assistant Tura (Rachael Deacon). They proceed to show Doris an exhibition of curvy, uninhibited women who have broken through their self-consciousness thanks to the doctor’s treatments. Will Doris have a change of heart? Don’t ask me! Watch the movie.

While the tonal shifts in HUMPINSTEIN makes for occasionally mind-boggling viewing, once it settles down and commits to its theme – that sexuality and femininity should be embraced and celebrated – it’s a boat-load of fun. Page is wonderful in the lead, showing appropriately exaggerated horror at the taboo subject matter while remaining impressively physical once she lets loose in the film’s climactic moments. In fact, all three of the leads give strong, appropriately bat-shit performances. I don’t feel comfortable ranking the doctor’s exhibitions, but needless to say they straddle the line between the ridiculous and sublime perfectly. These displays may begin to stretch your patience a bit – particularly as they are  all saved for the very end – but I’ll never complain about watching a woman simulate sex with a giant inflatable banana. 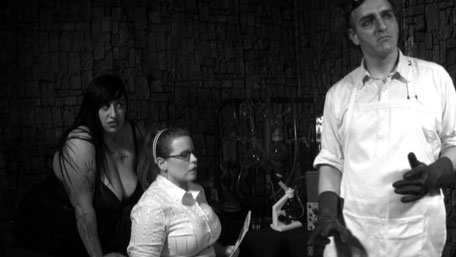 The photography is actually attractive, and impressively bring to mind the exploitation films being emulated, and there’s a great rockabilly soundtrack propelling things forward . While the film doesn’t make use of many locations, they are appropriately varied and visually interesting, and a brief scene filmed at a concrete factory gets a lot of production value out of a great location. Unfortunately, there are a few digital effects which feel a bit out of place, but in many ways it adds to the goofball charm of the whole production. 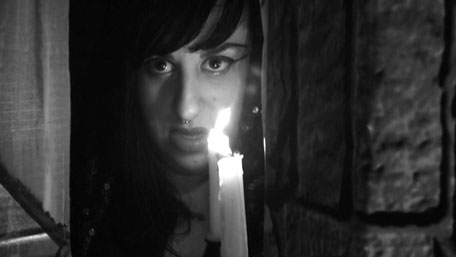 Running a brief 38 minutes, DR. HUMPINSTEIN’S EROTIK CASTLE never has the opportunity to wear out its welcome, though genre fans might be surprised by the lack of nudity and gore. In fact, the production as a whole is rather pleasantly tame, though there are a few moments which still have the ability to raise an eyebrow. For those with somewhat loftier taste – and an appreciation for the subject matter – there’s plenty to enjoy here, and the content is consistently refreshing in a genre that can be tiresomely brain-dead. Shearer isn’t out to hit his audience over the head with a political statement, but your appreciation and enjoyment of DR. HUMPINSTEIN’S EROTIK CASTLE may rely heavily on your appreciation of what he’s trying to do – but if you’re on the proper wavelength, you’re in for plenty of fun.

Join us this week for an interview with DR. HUMPINSTEIN’S EROTIK CASTLE’s director ANDREW SHEARER