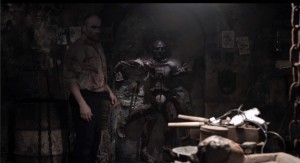 While the NO-BUDGET NIGHTMARES column focuses generally on feature-length (or ALMOST feature-length) projects, this means I regularly (and unfortunately) have to ignore the massive number of impressive (and many execrable) low-budget short films that are out there. If anything, many of the triumphs of ultra low-budget film-making are happening in these projects, which don’t have to draw out tired concepts past their breaking points, or stretch already limited resources.

With that in mind, I’m looking to semi-regularly do a round-up of recent genre short films to shed a little light on the huge variety of material that is out there on various streaming sites, or making the rounds at festivals.

Shown as part of the UK’s FRIGHTFEST in 2011, Christopher Goodman and Nicholas Thompson’s FLESH ART isn’t just another zombie short film. In just six short minutes, the piece defines a post zombie apocalyptic world, but here the living dead are at the mercy of an artist who is using the reanimated flesh and bones in his installations. This unique twist feels incredibly modern, and the concept is ably supported by strong organic production design that occasionally brings to mind Robert Burns’ bone sculptures from the original TEXAS CHAINSAW MASSACRE.

Of course, the whole thing has to end in a bit of ironic violence, but it’s realized beautifully – and the zombie make-up (so often an afterthought) is very well done. In fact, the production value is so high that it’s a little unfair to compare it to the threadbare costumes and sets usually featured in this column. It’s not surprising that Goodman has recently been working with the BLOODY CUTS crew as an art director, as his sensibilities and commitment to high concept short horror melds wonderfully well with that project.  In fact, FLESH ART could easily be mistaken for an official BLOODY CUTS short, which speaks well to its high quality.

I’ve been aware of Dayna Noffke’s short film work for quite a while now, due to her tireless presence in the No-Budget film-making community, and as a key piece of the Georgia horror boom. Not only is this movement refreshingly progressive, it’s also female-led; and that’s an important piece of her short slasher piece MOUSE (GONZORIFFIC’s Andrew Shearer was cinematographer). Focusing on a group of women heading out into the woods for a bachelorette expedition, the experience soon turns murderous as the campers are picked off one-by-one.

Outside of the all-female cast, there isn’t much that’s unique about MOUSE. The initial interplay is fun, but seems to be setting up a much longer running time than the 12 minutes we end up getting. Once the murders begin, they arrive rapidly- but almost entirely off-screen – and the eventual reveal of the killer doesn’t have much impact. Still, it looks great, and the cast are terrific – and have a very natural and comfortable interplay. A longer running time and more sensible motivations for the action might have led to something truly special, but what’s here is still consistently interesting – but doesn’t pay off.

Co-directed by Noffke’s 15 year old daughter and starring her younger daughter, PICNIC makes for a brief, fun exercise in tension building. Conceived and shot within one hour, the concept of the piece is simple, but reliably frighting. A young girl plays in a yard, picks flowers, and has a tea party while ominous music plays; the filter making the black & white photography washed out and grainy. A truly horrific looking garden gnome adds to the tension, though much of the work is undone by a cheesy last-minute voiceover. Still, at just over two minutes it makes for a fun diversion, and is a testament to Noffke’s ability to embrace her inspiration.

All three are definitely worth your time.