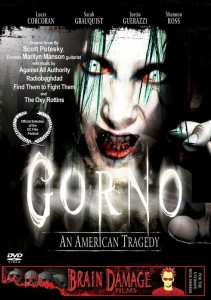 Few things are worse than a film that portends to be illuminating but instead throws half-considered cliches and “shocking” imagery at the screen in an attempt to be edgy. Watching GORNO: AN AMERICAN TRAGEDY is like being lectured by a particularly confused teenager; inconsistent, obnoxious and constantly contradicting itself while maintaining a smug look of self-satisfaction you just want to smack off its face. While obviously attempting to ape the style and subject matter of Larry Clark’s controversial 1995 film KIDS, directors Oliver Assiran and Les Norris pull liberally from any number of sources – TAXI DRIVER and Harmony Korine’s GUMMO are referenced extensively – but fail to add anything of substance, relying instead on straw man mouthpieces to voice their assorted displeasure with the world. While equal opportunity offenders, the co-directors tackle homophobia, rape, racism, AIDS, mental disabilities, and much more with all the subtlety of a propeller to the groin. There’s nothing wrong with insulting good taste, but there’s no excuse for insulting your audiences’ intelligence.

When attempting to dissect just how GORNO went so horribly wrong, it’s difficult to know where to start. Perhaps it’s the structure, which mixes faux-documentary footage (featuring our two directors as Ollie North and Chuck Norris. GET IT?) with hollow, purposely offensive voice-overs and occasional pieces of nonsense that seem to have spliced in from an entirely different movie. Characters are introduced at random, with many having brief, confusing subplots before vanishing entirely. Video quality varies massively, with 35mm film mixing with videotape and a variety of filters to make for a headache inducing and nauseating viewing experience. Add that to a soundtrack of goth-rock (courtesy of former Marilyn Manson guitarist Daisy Berkowitz) and punk and you get an intentional assault on the senses that simply tries too hard. And fails. Over and over. 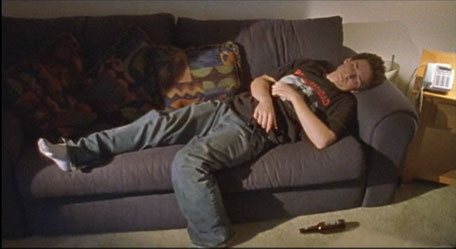 The circular plot involves two documentary filmmakers trying to uncover the facts about a murder case from a few years back in the suburbs. Meanwhile, a serial killer starts picking up people randomly in the neighborhood, sparking fears that the two incidents might be connected. But we spend most of our time with Kelly Brady (Lucas Corcoran), the younger brother of the murder victim, and a deeply disturbed teenager. He spends his time selling pot, fantasizing about shooting up his school, and being a general asshole to everyone he encounters – especially his gay father, who happens to be one of the most unpleasant caricatures of a homosexual I’ve seen in a film. Yes, even worse than the one in SCARLET FRY’S JUNKFOOD HORRORFEST. The eventual reveal of the details of the murder should come as no surprise, though the film clumsily throws a few red herrings in. There’s a sub-plot about a supposed vampire that is possibly comic relief, but in this movie it’s hard to tell.

In the film’s most unpleasant scene a girl is gang-raped at a party by a group of frat guys, before her own brother (unknowingly) takes part in the sexual assault. There’s no follow-up or consequence to the experience, just a random bit of extreme nastiness that is supposed to show the depths to which these teens have fallen. What follows is simply a series of malodorous set pieces which quickly have a numbing effect. Boredom sets in quickly, and by the time characters start committing suicide or killing each other, you’ll wonder why you’re even supposed to care. It’s meant to uncover the secret repulsiveness of your average american teen, but the elements are so ridiculously exaggerated that it rings entirely hollow. 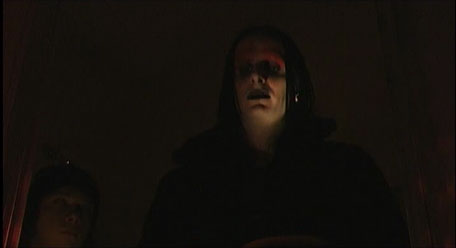 It’s difficult to understand why GORNO even exists. Its themes of alienation and teenage debauchery are explored to much better effect in the films it’s so desperately trying to emulate, though we get the usual terrible acting – watch out for Mr. Ohio, who can’t even seem to keep his own name straight – and lousy production values to put a fine point on it. Intertitles attempt to be profound, but quotes from Neil Young and Charles Bukowski are best scratched into your high school notebook, not thrown haphazardly into your feature length film. I’m all for nihilism, but GORNO: AN AMERICAN TRAGEDY cares so little for its characters that it starts to bleed through as open contempt for its audience. A thoroughly awful film.

Join us this week for the latest NO-BUDGET NIGHTMARES Podcast where Daily Grindhouse contributor Moe Porne and I will discuss GORNO: AN AMERICAN TRAGEDY