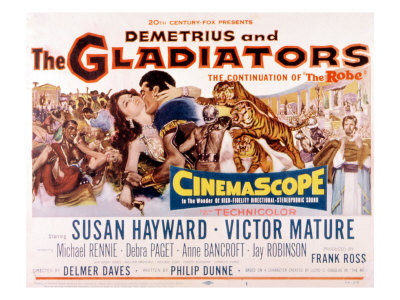 It was the kind of thing you would never see in Hollywood in the present day: a producer thinking, “We’ve built all these huge sets, made costumes, we’re pretty sure this is going to be a hit… why not make the sequel NOW?”

This was the case with DEMETRIUS AND THE GLADIATORS; shooting began a mere three weeks after its predecessor, THE ROBE, wrapped. As its stars, Richard Burton and Jean Simmons, die at the end (ooh, sorry, spoiler alert!), the story is carried on by Victor Mature as Demetrius, the Greek slave turned Christian ringleader. 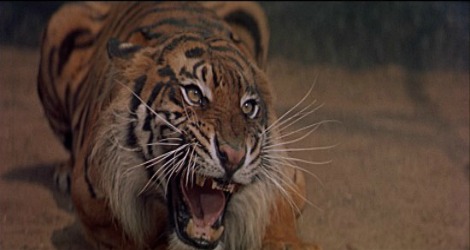 The film’s story is like a mirror image of THE ROBE’s, which concerned itself with the conversion of Burton’s character, Marcellus, from corrupt Roman Tribune to Christian; Demetrius’ story arc takes him from Christian to corrupt Roman Tribune. It’s a more satisfying redemptive arc than Marcellus’, because Demetrius’ crisis of faith is much more visceral, much more (dare we say) down to earth.

Emperor Caligula (Jay Robinson again) wants the robe because he thinks it has magical powers. While the Praetorian Guard is roughing up Christians to find it, Demetrius tussles with them and winds up getting tossed into gladiator school (run by Ernest Borgnine!). As a committed Christian, he refuses to kill his opponents (though, to be fair, tigers are apparently okay). This attracts the attentions of Messalina (Susan Hayward), who begins to screw with Demetrius’ life unmercifully – especially when she finds out about the “not coveting your neighbor’s wife” bit.

Demetrius’ old friend Peter the Fisherman (Michael Rennie, also from the first movie) shows up and lays a major guilt trip on him, and when Demetrius is sent by Caligula to fetch THE ROBE, he finds Lucia is not dead, merely catatonic, clutching the robe in a death grip. Demetrius prays her back to consciousness, gets his faith back, confronts Caligula, blah blah blah.

Demetrius is actually a pretty good movie; there were a couple of action sequences in THE ROBE to break up all the soliloquizing and proselytizing, but they seemed almost half-hearted. Not so here – DEMETRIUS AND THE GLADIATORS is very conscious of its title, and the scenes in the Arena are well done. Delmar Daves is the director this time out, and unlike THE ROBE’s Henry Koster, has no problem filling the expanded frame of CinemaScope. THE ROBE rarely provided much in the way of spectacle, but the Arena scenes in Demetrius has hundreds of extras for the needed scale, pomp and circumstance.

I’ve read many reviews of the movie, and they are (as is to be expected) all over the map. Victor Mature is either wooden or overacting… make up your mind, folks, he’s one or the other! For my money, Mature is just fine here (and frankly, he upstaged Burton’s taciturn Marcellus in THE ROBE, too), alternately serene, filled with rage, lustful, and sorrowful. Susan Hayward deserved better writing for Messalina, but she does what she must to make the role work. Michael Rennie brings the proper gravitas to Peter, as does William Marshall as Glycon, a former Nubian king turned gladiator, who befriends Demetrius in the school. It’s a very good cast undercut by Jay Robinson’s whiney and screechy Caligula. I hope for Robinson’s sake that wasn’t real marble on the sets, or he would have seriously damaged his teeth while gnawing on the scenery.

Okay, credit where credit is due: There is a scene early on when Caligula is threatening Claudius (Barry Jones) with a dagger. Caligula slaps the dagger back into its scabbard, but the prop won’t cooperate, and the scabbard keeps pointing out from his waist like a metal phallus, despite several attempts to straighten it. Robinson doesn’t stop, he doesn’t break character, he just channels his obvious frustration into the character.

DEMETRIUS AND THE GLADIATORS, like a lot of 20th Century Fox’s catalog epics, hasn’t fared very well on home video, simply dumped to VHS and then DVD with no noticeable restoration work, its once-fabled Technicolor faded and dull. Twilight Time Entertainment’s limited edition Blu-Ray, however, finally rectifies that with a gorgeous transfer free of dust specks and color that almost literally pops off the screen. Never before have I been so transfixed by the fire in the plentiful open braziers. This picture is that gorgeous. 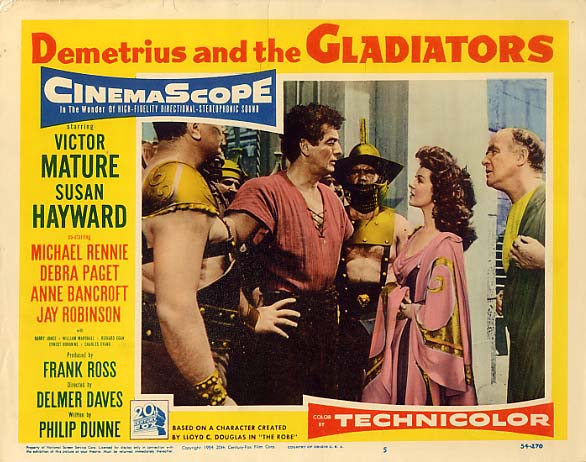 Demetrius was also one of the first movies released with stereophonic sound, which is serviceable, sweetened a bit for modern home theater systems. But best of all is Twilight Time’s traditional Isolated Score track, allowing you to simply drink in Franz Waxman’s music. That’s a feature I would love to see on a lot more discs.