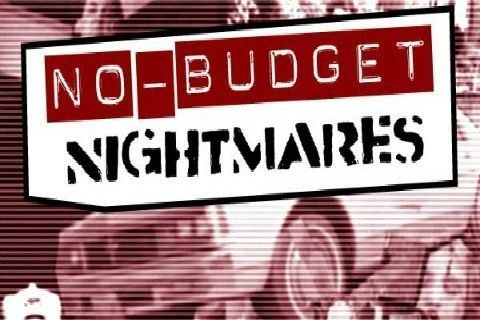 We’re living in a golden age of horror anthologies!

Well, maybe not quite a golden age.. but there’s been a surprising glut of anthology films over the past several years, from the relatively widely known V/H/S series and Drafthouse Films’ THE ABCs OF DEATH (and their respective sequels) to CHILLERAMA, HI-8 and the upcoming female-driven XX. It’s a fine time for fans of the short form. Or, at least, it would be if most of the segments in these films didn’t straight-up stink. Oh, for sure there are some exceptions (Timo Tjahjanto and Gareth Evans’ SAFE HAVEN from V/H/S 2 being a big one), but over-all it seems like a lot of modern genre filmmakers have lost the ability to think small.

Thankfully — as we’ve seen in this column — there are still plenty of great directors digging their teeth into short horror films, and many who still specialize in the undervalued (and underseen) form. One recent, though far from inexperienced, contender is Eric Richter, who has been building his credits over the past decade in every department you can imagine; from sound, to editing, to visual effects, to cinematography. As is common in the ultra low-budget world, he has the skills to pay the bills; and those skills have brought us his fiction-film debut with I HATE RACCOONS. 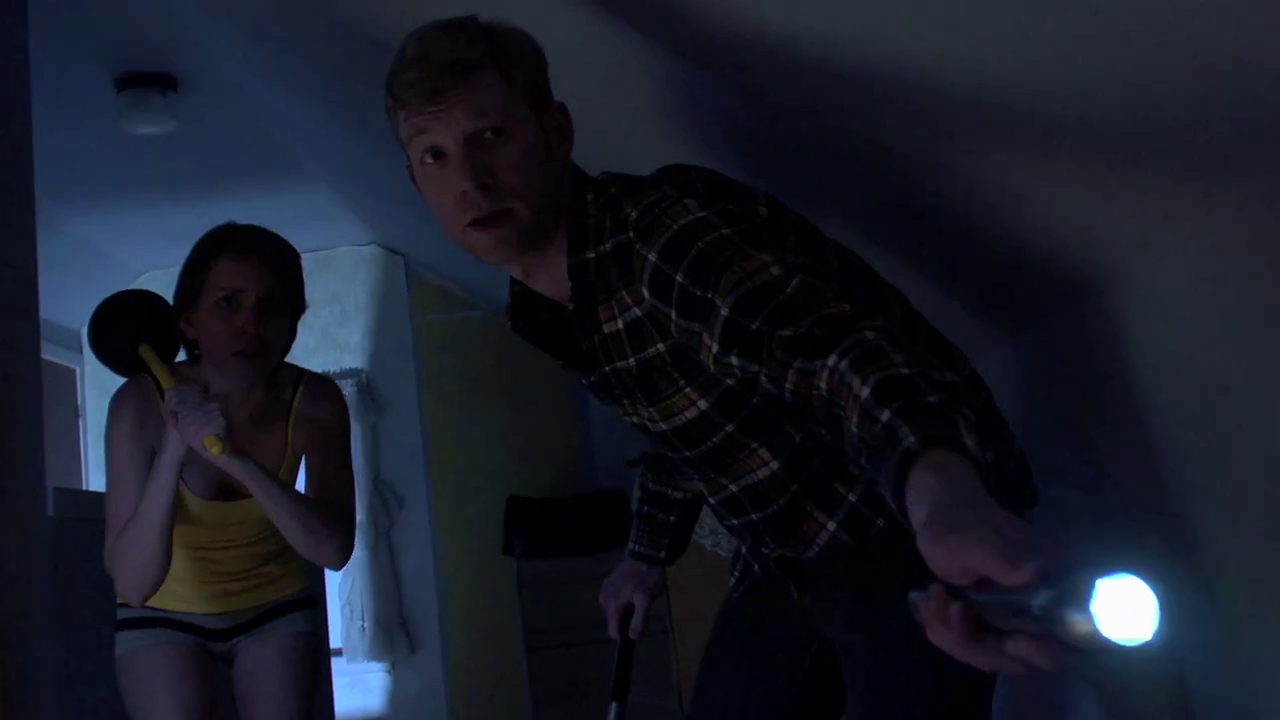 I HATE RACCOONS deals with a problem we can all relate to: Discovering that someone has mysteriously shit on your bathroom floor. The perturbed Dylan (Michael Carey) at first blames the attack on his wife Grace (Di Billick), but after she protests, the two of them decide that it was the work of a raccoon. After hearing a mysterious thump in their attic, the two go up to investigate and discover..

Well, that would be telling. The whole thing is only 3 1/3 minutes long, so I’ll let you discover what surprises it has in its *checks watch* final minute.

Technical work is very strong – which is never a given on low-budget efforts –  with some of the trickier lighting elements in the second half (involving a flashlight) being done quite well. Even better is the acting, with both Carey and Billick capably showing both irritation and fear at their eventual fate(s). Special effects are minimal, but some credit has to go towards the quality of the fake shit.. which gets a nice closeup so the audience can adequately appreciate it. 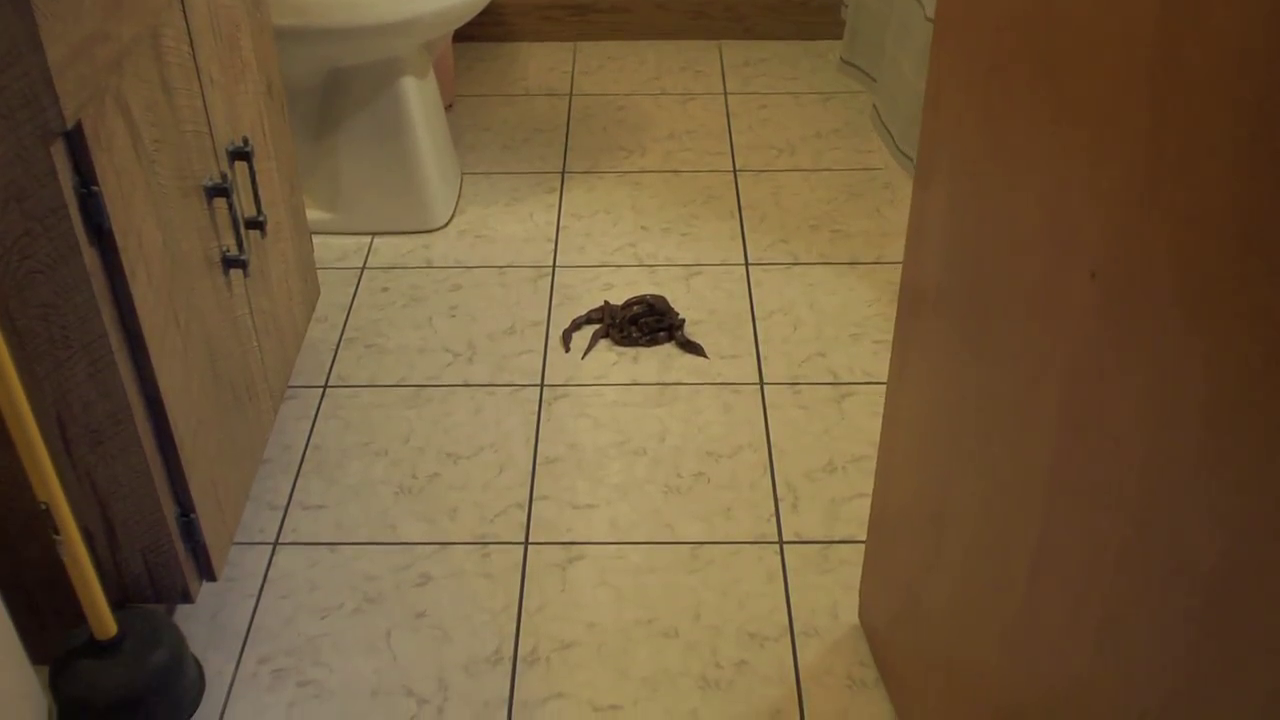 It’s a fun, funny, polished short that shows off the abilities of all involved without trying to stretch their capabilities — and the patience of the audience — beyond its breaking point. That might sound like faint praise, but it’s just nice to be able to relax and enjoy a micro-budget effort without worrying about distracting issues with sound or video. It’s also really amusing, and has a terrific stinger. Worth tracking down.

I recently had a chance to chat with Eric Richter about how (literal) shit is made, his recent music video work, and what he has coming up. 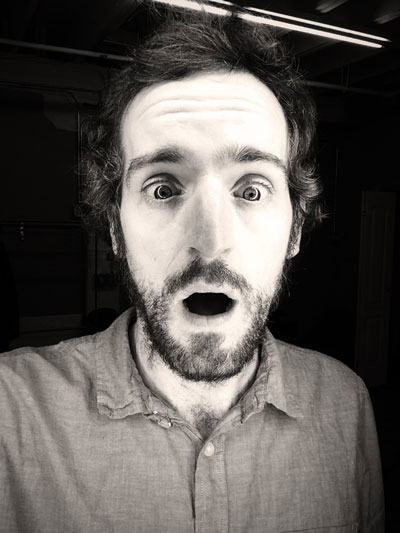 Doug Tilley (DT): First thing’s first. What was the shit made out of? And who was responsible for constructing it?

Eric Richter (ER): That’s all Anthony Sumner, who made the short with me. In addition to being a really talented director, artist, filmmaker, and mentor, he kills it on practical effects and makeup. If I remember right, it was some kind of chunky hazelnut spread with some fur in there and probably a small can of corn all squeezed out of a plastic baggy. He’s done a bunch of really great fx work in some music videos I’ve directed and on a no-budget feature film we made that he directed called Slices of Life.

DT: Can you speak a little about the conception of I HATE RACCOONS? Was the idea just to do a fun riff on a werewolf/yeti/sasquatch story?

ER: It was out of wanting to come up with a story that could be shot efficiently with no money using what we had at our disposal — great actors, a house to shoot in, cheap Canon FD lenses, and some props that were laying around. From that, I had this idea showing communication breakdown between a couple while they’re looking for this pooping monster and blaming each other. Seemed fitting to me.

DT: You’ve obviously had a lot of experience with various elements of production, but you’ve mostly stayed away from directing much fiction work up to this point. What made this short film the right project to focus all of your talents?

ER: I’ve been directing for a while now. In the the past four years alone I’ve directed over 80 music videos, among other short documentaries, commercials, and creative projects including a season of a comedic web-series. Right now I’m looking to direct more narrative work like feature-length films and documentaries. I HATE RACCOONS came out of wanting to do that.

DT: I was particularly impressed with the quality of the acting in the piece. Frankly, even passable acting in low-budget shots is a rarity, but your performers show surprising comic timing. How did Michael Carey and Di Billick get onboard?

ER: They’re the best. They are both working actors in Chicago and I’ve been lucky enough to have collaborated with them on a bunch of projects before this. I sent them the script and they were both into it and said yes. They have a really unique sense of comedic timing and took what was on the page and made it better and coherent. Mike has also been in commercials including one for Netflix, has a bad ass band, and has done some fantastic theater work in town. In addition to acting and modeling, Di is in a couple of comedy troupes. One of them is directed by Brian Posehn and the other one is called Dandy Boy, that is completely insane. They just won a spot at Chicago Sketchfest next year in January. Mike and Di work extremely hard at what they do and always bring their A game. That’s all you can ever ask for.

DT: I HATE RACCOONS would fit very neatly into a horror anthology. Are you currently shopping it around, or are you hoping to get it screened in short film collections or competitions?

ER: To be honest, we submitted it to a couple of film festivals and it got denied. Instead of spending more money on festival fees or having it collect dust on a hard drive, I decided to just send it to a cool outlet like Daily Grindhouse. Somewhere that would be exciting to see the work we made, call it a day, and start the next project. In saying that, maybe we can partner up with you guys and make a horror anthology centered around poop. Has that been done before?

DT: What’s next for yourself? Right back into directing, or are you going to continue to mix it up?

ER: My focus right now is to get into as much creative trouble as humanly possible and continue to grow as a director/filmmaker. I just wrote two fun genre scripts that Anthony and I are developing that will take a tiny bit of money to get done. I’m also about to write a new one that will be able to be made pretty quickly on a much, much smaller budget. Unless something else pops up right now, I’m hoping to direct one of those and of course work with Anthony on something he’ll direct which could be one of those projects or finishing up something that we started a few years ago. Outside of that I’m always looking for good scripts and projects to collaborate with awesome people on.

DT: Anything else to plug?

ER: Here’s a new video that I directed for a bunch of great dudes from St. Louis. For some reason somebody said yes to giving us a some money to blow up a van. It was a fun shoot where the crew brought it on every level.

DT: Finally, as someone who has worn many hats in film production, what advice would you have for someone just starting out?

ER: Stay surrounded by supportive and honest people, and work hard – the pain is ALWAYS worth it.