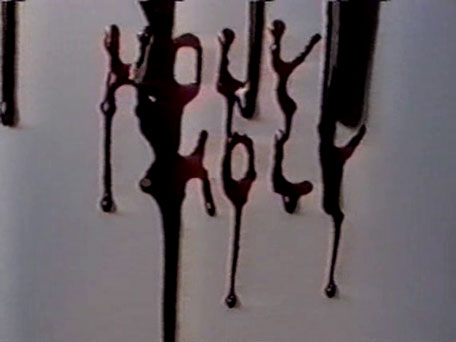 Well, here’s an oddity. Back in 1991, the lead singer of Thrash metal band Skitzo, Lance Ozanix, decided he was going to direct and star in what was – I guess – supposed to be a full length, shot-on-video horror film. Aside from his musical skill, Ozanix is best known for his ability to vomit on command (a talent that has brought him to the illustrious heights of The Jerry Springer Show and Judge Judy), and the film was designed to showcase both his acting chops, obvious love of horror iconography and as much barfing as humanly possible. And, with Ozanix that is quite a bit. HOLY MOLY ends up barely scraping the 40 minute mark, but makes for a spry, gory and occasionally amusing short in the Todd Sheets mold. 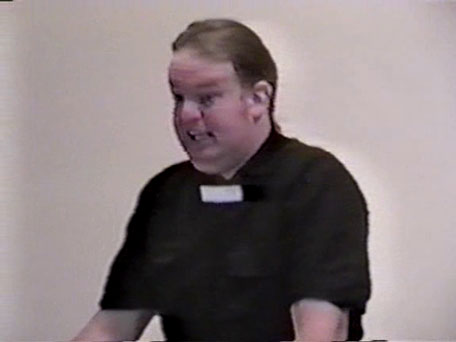 Ozanix plays the titular Holy Moly, a beloved priest who has the misfortune of encountering the mysterious Vile Lynn (Chris Schott) after a sparsely attended sermon. Lynn professes that, like Holy, he “speaks the word”. That word is revealed moments(?) later when Lynn attacks Holy, before demanding that the kindly priest kill for him (“You’re going to kill for me! You’re going to kill!”). Soon after, Moly begins having dark, demonic visions involving the townspeople, culminating in plenty of vomit (of course) and the eventual murder of his friend and parishioner Harry. Realizing that his visions are out of control, Moly sequesters himself (with booze!) to avoid any future killings. Vile doesn’t take kindly to Holy’s attempts to avoid his duty, and arrives at his home to have a little talk with him (aka pull his spine out through his ass). It ends quite unceremoniously, with Moly’s corpse being tossed into a nearby lake. See ya, Holy!

Yep. This is definitely an odd one. But somehow despite the extremely low production value, and occasional gobs of gore, HOLY MOLY remains thoroughly charming. Perhaps it’s the brief running time, or perhaps it’s that it’s simply achieving everything it’s aiming for. Ozanix wanted to create a violent, goofy tribute to the violent horror-comedies of the 80s, with brief mentions of genre magazines like Fangoria and Gorezone, and he packs it full of unique touches that never allows it to slip into tedium. It’s terrible, of course, but it’s terrible in that rare way that us no-budget fans adore. 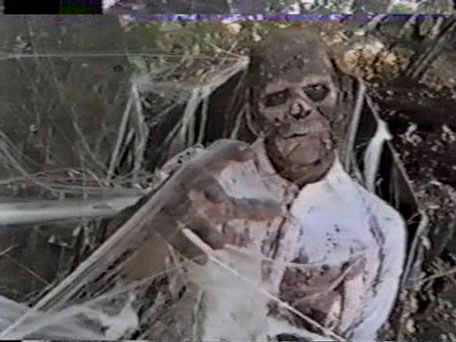 But even in the realm of low-budget productions, this one is pretty bare-bones. The entire film appears to have been edited in-camera – with the requisite brief video glitches every time it changes angles or shots. Scenes move from day to night with no transitions at all, and it’s near impossible to tell how much time is supposed to have passed from the first scene to the last. The film could take place over a period of weeks, or just a couple of days. Sound quality is pitiful, with many street scenes having so much background noise that it makes dialogue difficult to make out. As a production, it’s piss-poor. But this is No-Budget Nightmares! It so entirely embraces the low-budget aesthetic (even the opening credits are simply a piece of cardboard with the title written in fake blood) that it deserves kudos. This is a film-maker making the most of what he had, and – somehow – making it all work. 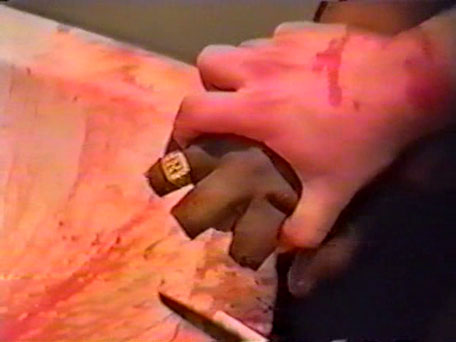 Made with a beautiful lack of style or grace, HOLY MOLY works because it knows exactly what it is. This is stripped down entertainment on a primal level, with a DIY attitude that completely ignored traditional rules of film-making. Often, that results in an unwatchable mess, but there’s enough silly, violent fun here to make the brief exercise entirely worthwhile. If you love thrase metal, vomit and no-budget films.. this here will hit you right in the sweet spot.