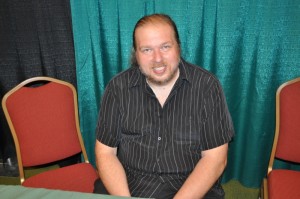 A few months back I had the pleasure of talking to director George Demick about his 2004 film BURNING DEAD, and was astonished to discover a man with no shortage of interesting stories. From working with George Romero on KNIGHTRIDERS, to playing a zombie in DAY OF THE DEAD, to getting Stephen King’s blessing to adapt a short story, Demick was a fascinating character, and someone well worth getting to know. George was good enough to send along a couple of his more recent films, including DEAD START – his take on the zombie apocalypse genre. Just about to start his next film INCANDESCENCE, I caught up with George Demick to ask him about DEAD START, his pro-wrestling career, and much more.

Sweetback (SB): Last time we talked, you were just starting to prepare your next film INCANDESCENCE. Since then things have ramped up, and you’re about to start filming. Can you tell us a little bit about the plot?

George Demick (GD):  Something is attacking the people of Clarksburg at night. When the sheriff and his family are attacked. It’s up to Meg Wright and the other deputy sheriffs to get to the bottom of the attacks.

It’s a straight up horror film with a bit of a sci fi ending. We start shooting June 1st. It’s going to be a fun movie to make. Lots of fog and atmosphere.

SB: One thing I really wanted to cover this time out is a bit more detail on your pro-wrestling career. I actually find there’s quite a bit of cross-over between pro-wrestling fans and genre film fans – the theatricality, the violence, and even the carnival barker marketing. When did you first get interested in the art-form, and how did you get involved with actually becoming a pro wrestler?

GD: I would watch late on Saturday nights when I was about ten. When Larry Zbyszko turned on Bruno Samartino I begged my parents to take me. I was hooked. We went every month until the Hulk Hogan cartoon era started. Then we switched to the NWA. By the way, Romero did a great documentary on Bruno.

I had always loved it. Then when I was in my 30’s Some friends I knew had gotten trained and started their own indie company. I said I was too old and would be the president. Well, things would happen and I would get more and more involved physically. I wanted to really do moves, but the thinking was “you’re the president you couldn’t know how to do anything”.  A couple of years later Vince McMahon in the WWF did what I had wanted to. Anyway I “left” and then came back as a wrestler named George Gunn. It was a blast. My specialty match was a dog collar match. You and your opponent wear dog collars and are connected by 15 feet of steel chain. It was a total blast.

SB: DEAD START actually has a brief clip of you cutting a (very effective) wrestling promo. Can you talk a little about your pro-wrestling influences? Bruno Sammartino must have cast a rather large shadow in Pittsburgh when you were growing up.

GD: The clips in DEAD START go a little too long, but it was my one ego thing… I wanted people to see that I had done it. I loved Bruno. Also Bob Backlund, Pat Patterson, Magnum TA, Roddy Piper and Pedro Morales. My style in the ring was probably a mix of Piper, Paterson, and Pedro. My finisher was Magnum’s Belly to Belly Suplex. What I excelled at was telling a story over a series of matches with an opponent. Pretty much building it like a movie.

SB: Do you still maintain involvement with the business (of pro-wrestling)?

GD: I still know a few people locally and have been toying with a final match for a couple years now. It probably won’t happen. I have to really trust the person I’m working with. My youngest son is wanting to go into wrestling. So I have had guys like Al Snow talk to him about breaking into it.

SB: Sorry for all those pro-wrestling questions. It’s just a business that has always fascinated me.

GD: I love talking wrestling, too.

SB: So, previously we discussed BURNING DEAD – which had some living dead elements – but DEAD START is a full-fledged zombie apocalypse film. Despite your pedigree and experience working with and around George Romero, the zombie film is a tough nut to crack. What made you decide to make your mark on the genre?

GD: I really tried to steer clear of zombies as much as I love them, because of George. I had thought about doing one for years, but kept pushing in other directions. We even tried to get a zombie television show off the ground called DEADLANDERS. Thank God for WALKING DEAD. They do it so right I have no desire to try that now. Anyway I got this idea about the scene of getting a call from a family member and not being able to help them. It evolved from there.

SB: One of things I loved about the film was – and I hope you don’t take offense at the suggestion – the mundanity of it. Mark and Anne are average, middle-aged people who are no more prepared for the dead to come to life than the average viewer would be. What about these two characters in particular made you want to focus your attention on them?

GD: Isn’t that most of us? Yes, I know more and more people have Zombie plans now, but I don’t. I really doubt it will happen – not saying it won’t, just really doubt it. I wanted to take the average couple and see what would happen in that situation. Linda Wylie and Chris Whitsett really brought those characters to life. They even snapped at each other during the takes like a married couple. She’s saying “get a chair!” while he’s yelling he has to bolt the door and little things like that just happened during the takes.

SB: After a decade of jokey zombie movie parodies, DEAD START is a deathly serious take on the material. You get the feeling, particularly as the news broadcasts start pouring in, that all hope is truly lost. Did you design DEAD START as a response to the more comedic take on zombie films?

GD: I wanted to make it a real as possible. There is nothing funny about the situation. I think a lot of the zombie movies turn to comedies because it’s so much fun coming up with creative ways to kill them and the filmmakers get carried away. I wanted it to be real. How many times do we see somebody take a shovel and chop a zombies head off. In DEAD START the shovel hits the bone and doesn’t go any further. I just wanted it to be a little bit more real. So to answer your question, yes I did.

SB: One of the most shocking and effective scenes in the film involves a reporter (played by Terry Kiser, a great character actor best known for the WEEKEND AT BERNIE’S films) and his cameraman being overrun by zombies. How did you get the great character actor involved, and what was he like to work with?

GD: My producer at the time Chuck Nicholson found out that without even trying we had almost broken the world record for a gathering of zombies. So we tried to break it and added that scene to the movie. A friend of mine Angela de Lugo brought him in. She was trying to get WEEKEND AT BERNIE’S 3 off the ground and  I thought it would be fun to bring the world’s most famous dead guy into my zombie movie. Terry is a wonderful guy. So talented and very sweet. I shot it and just ended up playing the camera man. It was one of the highlights of my career. We didn’t break the record because that was the year everybody tried and the numbers got way up there. After the shoot there was a huge party and Terry, Chuck and I arrived in the back of a hearse. Now if you have never been in one, there is absolutely NOTHING to hold on to. So we were being thrown around in the back on every turn or stop, just laughing like little kids… it was great!

SB: I want to leave a small space here for a rather large spoiler..

Perhaps the film’s most memorable moment involves our two leads – Anne and Mark Savin – deciding to commit suicide rather than face the hoards of zombies waiting outside. The scene where the two reminisce over photographs in the back seat of their car while waiting to die is hugely emotionally affecting, thanks greatly to the performances. Talk a little bit about filming that scene, and how you helped coax those performances from the actors.

GD: Boy, I wish I could say that I set the mood and gave them insights into what their characters were going through and really helped pull the performance out of them, but I can’t. We lit the scene. Rehearsed it twice. Tweaked very little things and rolled. Linda and Chris are awesome. The hardest part was not making the leather squeak as I shot on the front seat.

SB: When we discussed BURNING DEAD you talked briefly about how easy it is to get people to play zombies – for many it’s a dream come true. In DEAD START you have scenes where you’re working with massive numbers of extras – all in make-up and having to act appropriately zombie-like. Did you run into trouble having to manage such large groups?

GD: I wanted (DEAD START) to be about 2 people in a house. Small cast and claustrophobic. Then I remember we have TVs and internet and suddenly my little film needed lots of zombies. We put out word in the newspapers and on Facebook. We had expected 100 to 150 people. We ended up with 550 people! Some came from as far away as New York and Florida! It was great, as we separated them in to A and B zombies, had them sign release forms, go to zombie school and then into makeup. Those who had some makeup skills volunteered to help my 5 person makeup crew. The hardest part of a very hot day was yelling to be heard because I didn’t think I would need a bull horn. It was an amazing day. No problems, and everybody working together. Even when the pizzas we had set to deliver disappeared in 20 seconds nobody got upset. Zombies even helped pick up trash after it was done. And they all got sunburned everywhere except where the fake blood was.

SB: If someone wanted to purchase a copy of DEAD START, or follow the progress of INCANDESCENCE, what would be the best way to do so?

GD: Go to www.flickeringcandleproductions.com. We will be revamping the site shortly. It’s almost ready for the new website to be unveiled.

SB: Again, George. It’s always a pleasure. I’ll let you have the final word. In your opinion, what are modern horror films missing?

GD: The honor is mine. I always enjoy the questions you come up with.

Wow, what are modern horror films missing? I’m not sure really. I do know I don’t watch as many as I used to. It’s rare that I see a trailer that makes me want to rush out and see it. I do feel that a lot of it is rehashed, but probably the biggest thing is characters you care for. It’s why WALKING DEAD is so good. You have time to know and care about them, and then when bad stuff happens it makes you feel it. All the slick special effects and set pieces don’t mean anything if you don’t care about the characters.