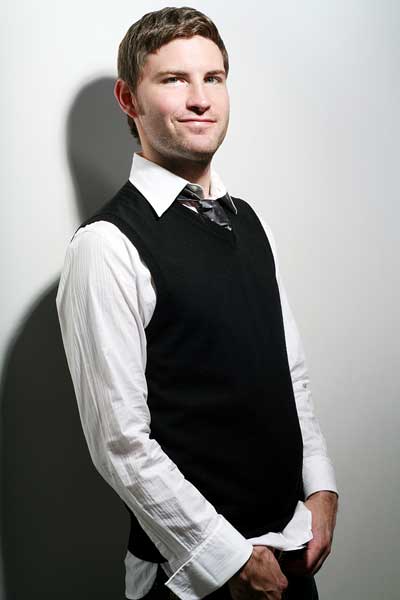 SB (Sweetback): I think a lot of fans of cult and genre films will recognize you from John Cameron Mitchell’s SHORTBUS, but it seems that in the last few years you’ve really established yourself pretty firmly in the horror genre with your work on The Lair and in a variety of films. Have you always had an interest in the genre? Is it something you’re looking to break out of?

PS (Peter Stickles): I am truly a genuine horror fan. Always have been. As a kid, I used to hide Fangorias under my bed as other boys did Playboys. My dad really hated that magazine. He didn’t understand why I would spend my money on such garbage…! It’s always been my dream to be in horror films. I used to look at the walls of the video rental store in my hometown (VHS mind you, not DVD) and fantasize about what it must be like making the movies I was peering at. I had an incredible moment last year when EVIL BONG 3D was put on display in the storefront of Meltdown Comics and I had the opportunity to walk by and see my face on its cover. The 12-year-old in me was elated! So, to answer your question, if I could do horror films my whole life, I would die a happy man. That’s not to say I am opposed to exploring other genres of film. As an actor, I love the craft and love the process of filmmaking, regardless of genre.

SB: It’s no secret that the horror genre as a whole can be labeled as a bit resistant to change. Gay characters in the horror films of the 70s and 80s were either used as shrieking comic relief, or cannon fodder. One of the refreshing things about GEORGE: A ZOMBIE INTERVENTION, and some of J.T. Seaton’s other works, is that there’s a real effort to break down these antiquated barriers. Was the three dimensional nature of the Ben character something that drew you to the role?

PS: I remember reading GEORGE: A ZOMBIE INTERVENTION on a plane and being really excited about the Ben character. I hadn’t been offered the role yet, hadn’t even auditioned, but I remember thinking that this was a character you could really sink your teeth into. I remember thinking that if I played this guy I would bring a little bit of Ash from EVIL DEAD with my own sensibilities and make up this “hero type” that would stand back, take in all of the insanity that was happening around him, and instead of freak out and run away, he would take it on with what ever he could muster up. And that came out in a goofy, but intelligent, one-liners and wacky props. And all of that is credit to JT’s writing and script.

SB: Did you know J.T. before filming GEORGE: A ZOMBIE INTERVENTION? How did you find yourself cast in it?

PS: JT and I met on the set of PSYCHOSOMATIKA back in 2007. We hit it off and shortly after that film he sent me the GEORGE script. I was still living in NYC at the time. I auditioned in LA, I remember that much. And by the time we starting shooting, in late 2008, I had already moved to LA. JT is a wonderful guy and I consider him a close friend.

SB: Was filming a particularly grueling process? It was J.T.’s first feature, and a pretty gory one at that.

PS: For a first-time director, it was a pretty smooth shoot. JT handled things remarkably well. I remember him focusing a lot on moving things forward. A lot of times the director, or First AD, can get hung up and lose focus. Next thing you know, a couple hours of gone by, you lose the sun, you lose crew, and the day is over. And now you are a couple of scenes behind and have to pick it up the next day. Then it just becomes a mess. I don’t remember ever being behind on the set of GEORGE. I’m sure JT could tell you otherwise, I bet he remembers the hold-ups, if there were any. My biggest challenge was the gore – the blood in particular. For the last quarter of the film, I was covered in the stuff. Its mixed with maple syrup so that it wouldn’t evaporate and would stay in one place for continuity. It was very VERY sticky and very cold. It was terrible to sit around with that stuff all over you. Michelle and I had most of our scenes together at the end so we knew how each others blood looked – where on our faces, necks, it was splattered, etc. So we would apply each others blood every morning. I remember her just throwing TONS of the stuff on me and me saying “that’s enough!!” She would just keep throwing it on me yelling “you need MORE! More blood!!”

SB: Talk a little about some of your fellow cast members. You worked most closely with Michelle Tomlinson as Sarah, but it’s a true ensemble piece where most characters get moments to shine. Who did you most enjoy working with?

PS: Man, we all got so close making that movie. Most of us are still in touch today. Michelle and I remain great friends. She is a wonderful chick and an awesome actress. We really cracked each other up. Eric (Steve) and I hit it off too. I see him a lot at auditions. And all of us really loved Lynn Lowry. She and I worked together previously on PSYCHOSOMATIKA. She became our den mother. She is one of those people that just shines when she walks on set. You just want to be around her all day long. And what a professional! We always make it a priority to see each other at conventions or make it to each other premieres. I’ve learned a lot from that lady.

SB: One of the most memorable parts GEORGE’S INTERVENTION is the closing advertisement, where you have to intentionally act awkwardly. How challenging is it for an actor to go against his natural instincts and intentionally act badly?

PS: Well, I was playing a zombie in that scene…! I think that is one of those characters that you really can’t screw up. It’s not like you are playing Abraham Lincoln – any choice you make is a fine one. Who is to say that you are playing a zombie incorrectly? So, I don’t think its a matter of acting badly. It’s just acting differently. And you can’t make a mistake! It’s kinda like a dream role!

SB: One thing I have to ask you about is your participation – both as an actor and producer – on SHOWGIRLS 2: PENNY’S FROM HEAVEN. I know I’m incredibly excited about it, and I’m sure plenty of Daily Grindhouse readers are as well. The trailer looks absolutely insane. How did you get involved, and what can you tell us about how people will be able to see it?

PS: Oh my god, SG2 is a TRIP! I saw it when it premiered in LA and in Long Beach. You think you’ve seen it all…? Just wait… I met Rena Riffel (the star, editor, writer, director) at a screening of her previous movie TRASHARELLA a couple years ago. We hit it off and remained friends. So when she started getting her cast together for SG2, she thought of me. I was honored. SHOWGIRLS is one of my favorite movies. We shot the movie in the summer of ’10. I felt like I was on an acid trip the whole time. It’s nothing like the original SHOWGIRLS. Don’t go in expecting that. I think the tagline for the original SHOWGIRLS best sums up SG2 “leave your inhibitions at the door… the show is about to begin” It is available now Amazon on VOD. Its also playing in LA on March 3!

SB: What projects are coming up for you? Anything you would like to plug?

PS: You can check out more about SG2 at www.showgirls2movie.com.
I am hoping to team up with the Full Moon guys again on a future project. (I did EVIL BOND 3D and GINGERDEAD MAN 3 for them last year). Right now I am in the process of finding a new agent or manager! Things like that are crucial when living as an actor in LA. So wish me luck!

SB: Again, Peter, thanks so much for your time. I’d love to get together for an extensive interview covering your work on The Lair, working with Charles Band on EVIL BONG 3-D, and your small role in the legendarily disturbing THE GIRL NEXT DOOR.

PS: Hey Doug, thank YOU for reaching out to me and having me be a part of your website. I am a big fan. Feel free to contact me in the future to talk about more stuff.