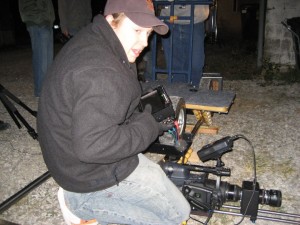 Sweetback (SB): Not many directors – even those working with very limited budgets – can stake the claim of directing a feature before their 21st birthday. Can you talk a little about how your interest in film-making developed, and how a kid from Kansas got into making feature genre films?

David Matheny (DM): I’ve been a huge movie fan ever since I can remember. I always thought about making movies, but didn’t take action until my junior year in high school when I got my first digital camcorder. At that point my friends kind of shifted from the football team and party animals to the nerds that were interested in computer programing and anime. We would get together after school and plan out a fight scene to film, but only after they got their fix of DRAGON BALL Z for the day. Ideas got bigger and bigger. By the time graduation rolled around we already completed a 20 min short, a 30 min short and numerous fight scenes that were for the most part plotless, but added fuel to the filmmaking fire. That’s how it all got started.

SB: IN THE RED was made in true ultra low-budget fashion, with you wearing a variety of hats – Director, Writer, Producer, Editor, and even actor! How did your experience on that film prepare you for your future work – MY STEP-DAD’S A FREAKIN’ VAMPIRE in particular?

DM: IN THE RED came about because I wanted to do something bigger, and the idea of having my very own feature film sounded amazing. A writer friend of mine I met at the local comic shop wrote it in 3 months and we shot the film over another 3 or 4 months. Within a year we had a feature film in our hands. It was a cool experience and added to the education I was getting from my short films, but nothing could prepare me for the nightmare I went through on STEP-DAD. Before STEP-DAD, filmmaking was mostly fun and games.

SB: While still a low-budget film by any standard, MY STEP-DAD’S A FREAKIN’ VAMPIRE was a significant step up in scale and cost. How did you go about raising money for the feature, and did the extra resources make your job easier, or simply add pressure to you as the creative force behind it?

DM: Raising the money wasn’t easy, but it was actually the easiest part of making STEP-DAD. I had a very supportive family that was willing to take a chance on me. They figured if the film didn’t make any money, at least I would get an education while making it. So my family forked over some cash along with friends of the family and I also maxed out a few credit cards. But when people invest money, there is automatically going to be pressure. Investors don’t understand why things take so long like getting a distribution deal or why we needed to go to festivals . Money made filmmaking hard work, but without money, you can’t make movies.

SB: Can you talk a little bit about getting Douglas Edward onboard to do the music? I know he had worked on one of your earlier shorts, and his music adds so much to the film.

DM: Douglas is amazing. Not only is he a great composer, he’s also a fine musician. I met him when I was looking for a composer for a short film called THE SCIENTIST back in 2006. It was the first time I hired anyone to compose music for one of my movies. Before that my brother Jon composed all the music for my films. After I heard the first draft of the score for THE SCIENTIST I knew that I would be working with him for a long time. He added authenticity to the film by recording strings and percussion live, which increases the production quality. Not a lot of composers can do that. It’s an invaluable asset to have in low budget filmmaking.

SB: The increased budget also meant that you could cast more experienced actors. What was the casting process like for MY STEP-DAD’S A FREAKIN’ VAMPIRE, particularly in trying to find the right actors to play RUSTY and – perhaps even more crucially – RICHARD?

DM: There are slim pickings for actors in Kansas. We had auditions in a conference room at a Holiday Inn. I think we saw 10-12 people that day. Nobody stood out as being awesome. Then just as we were packing up, Larry Peterson AKA Richard popped his head in the door and blew us all away. He nailed it! From there we found Lahcen Anajjar (Rusty) who introduced us to his acting class where we got the rest of the actors. Everyone had already established a comradery that really kept our spirits high when everything went wrong. They were all great actors and looking back I see that they were all great sports for dealing with my inexperience so well. 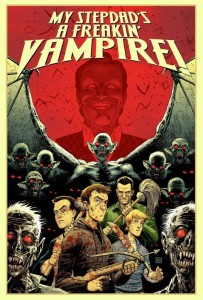 SB: Going back to the original concept of the film, what were some of the major influences? Certainly there are echoes of films like the original FRIGHT NIGHT and – a childhood favorite of mine – THE MONSTER SQUAD in there.

DM: The screenwriter and I came up with the title and began writing the movie when we were 16. So naturally movies like MONSTER SQUAD had a big influence along with GREMLINS and THE GOONIES. Believe it or not, I actually hadn’t seen FRIGHT NIGHT until 2009. I didn’t watch it until someone at a film festival mentioned how much STEP-DAD was like FRIGHT NIGHT. I picked up a copy at Best Buy and was surprised how many similarities there were. I’m pretty sure I must have watched it in another life or something.

SB: The second half of the film involves plenty of special effects – from green screen work, to some terrific vampire make-up work. How was it working with these FX? And how did you want to differentiate the look of your vampires from those in other films?

DM: I never planned on doing so much greenscreen work. That was a result of not having enough money. I wanted to shoot everything practically. No VFX. Shooting certain scenes with a green screen allowed us to shoot super fast in the same location. It bummed me out, but it had to be done to finish the movie. I didn’t know anything about greenscreen work at the time. Thank god for videocopilot.net.

The Vampire masks and suits were so much fun to make. I feel at home sculpting and painting. It was a period during the making of the film where I didn’t have to talk to anyone. I could just get lost in my head and sculpt away. I feel like the Vampire make-up and the score are the best parts about “Stepdad”.

SB: Since the release of MY STEP-DAD’S A FREAKIN’ VAMPIRE, you’ve been focusing on editing Machinima’s successful BITE ME web-series. How has that experience been, and are you looking to focus more on editing currently, or are you looking to tackle another feature length project in the near future?

DM: BITE ME was such an amazing experience. Being from Kansas, I was never exposed to so many people who took filmmaking seriously. In LA, filmmaking is a legitimate way to make money and it’s taken seriously. That’s a great thing. I wasn’t used to that. I was used to being viewed as the dreamer who needed to get a real job.

A feature film is a HUGE undertaking. I want to make sure the next film I make will be worth it. In the meantime I’m working on a science fiction short film. I’m hoping to have it completed within the next year. I’ll be posting updates on my blog about it. I’m currently working as a freelance editor and motion graphic artist, which is a great, fun way to pay the bills!

SB: If readers want to follow what projects you’re currently working on, or would like to purchase copies of your films (including MY STEP-DAD’S A FREAKIN’ VAMPIRE), what would be the best way to do so?

DM: If anyone would like to see what I’m up to please check out www.davidmathenyfilm.com. To get yourself a copy of STEP-DAD go to amazon.com for the best price. If you’d like to get a super secret version of STEP-DAD that comes with 2-DVD’s a slipcase and a poster please message me from the e-mail address on my site and let me know you want the super secret DVD of STEP-DAD. They are $20 with free shipping. It’s an earlier version of the film, but the packaging is awesome and there are lots of special features! I have about 250 left.

SB: And, finally, what advice might you have for young or inexperienced directors looking to get their first feature off the ground?

DM: Making a feature is a big task. If you haven’t had much time behind the camera, I highly suggest making short films for a while. Develop your craft a little. While your making shorts you can start to plan a feature. Don’t be afraid to ask questions to other filmmakers or professors. It’s okay to not know everything. Hell, if you’re just starting out, it’s okay to know nothing. Just keep working at it and keep a positive attitude!