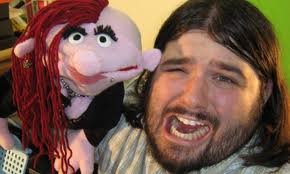 Sweetback (SB): It’s a bit crazy to think that since your previous interview with Daily Grindhouse in August 2011, you’ve directed TWO more films – with more in the works. How have things been career-wise since the release of THE PUPPET MONSTER MASSACRE?

Dustin Mills (DM): Its hard to gauge something like that so early in the game. THE PUPPET MONSTER MASSACRE while not a success in the economic sense it did prove to a lot of people what I am capable. It opened some doors. I am happy to report that I am now (knock on wood) a full time filmmaker. Don’t mistake that for wealthiness though. I work harder than I have ever worked in my life, for less money than I have ever made, but I don’t think I have ever been happier.

SB: NIGHT OF THE TENTACLES has a bit of a tighter scope than your previous two films. After the intensive FX work of PUPPET MONSTER MASSACRE and ZOMBIE A-HOLE, was there a conscious effort to make something a bit more straight forward?

DM: It was. I wanted to make a movie that was a bit more about character, and circumstances, and performance than lo-fi spectacle.

SB: Talk about the influence of Frank Henenlotter on NIGHT OF THE TENTACLES. One of the character is named Belial in an obvious nod to BASKET CASE, and the plot almost feels like a combination of that film and his classic BRAIN DAMAGE. Were those films in mind when you were writing it?

DM: Most definitely. I wanted to tap into that weirdness and isolation that really only existed in his films. I didn’t want to ape or spoof them. I wanted to express my adoration and love for them.

SB: The character of David has to walk a fine line between sympathetic goofball and complacent murderer in the film. What does Brandon Salkil bring to the table as an actor that allows him to stay so likeable in a complicated role?

DM: Brandon Salkil brings an energy and dedication to set that very few people do or even can. He’s 100% game for anything and he and I work really well together. When it comes to acting the guy dives in head first. He doesn’t look back. He attacks it with everything he has and I think he has a future ahead of him if he wants it. I would say that Dave is the role he was born to play, but I’m not sure there is a role that he wasn’t born to play.

SB: What was the process of designing the “heart” like? The film only hints at what it actually looks like until near the end. What sort of design were you going for?

DM: It actually came really late in the game. All I knew is that I wanted it to have tentacles. Jackie Mckown (who plays Delilah in the film) actually met with me and sketched up designs. I took what she had done and basically built it out of things that I had in my office. Our budget was so low and there wasn’t much room for complicated fx or puppets. I think the creature ends up being pretty silly looking, but it fits in the world of the movie.

DM: Oh I painted that, actually. I was a graphic designer for a long time. I had wanted to hire a professional illustrator to do that picture and more of Dave’s work that was in the original script, but it just wasn’t in the budget.

DM: The original title was actually Heart Attack, which I think actually makes more sense. Night of the Tentacles is what I settled on with the distributor. Some of the other titles I pitched were even crazier: Love and Death in the House of Tentacles, Blood Rape, Ventricular Homicide etc.

SB: What’s coming up next for DUSTIN MILLS PRODUCTIONS? The IMDB mentions you have a segment in the upcoming THEATRE OF THE DERANGED II compilation film?

DM: I am working on an animated short for that. We also have KILL THAT BITCH, and THE BALLAD OF SKINLESS PETE in the works. In the immediate future there is BATH SALT ZOMBIES (dropping February 19th) and EASTER CASKET (March 26th). I keep busy.

SB: For readers who might want to pick up copies of your films – or keep up on what you’re working on next – what would be the best way to do so?

DM: The best is to friend me on facebook or like the Dustin Mills Productions Page: www.facebook.com/dustinmillsproductions

SB: And, finally, what advice might you have for young or inexperienced directors looking to tackle their first feature?

DM: Stop being a pussy and just do it. Seriously. Don’t talk about it for 20 years. Get a camera and some software and do it.

SB: Thanks again for taking the time, Dustin. Looking forward to seeing your upcoming work!