If you’re in Boston this week, you’re in for a treat. No, not because of those delightful fahkin’ accents, but because you’ll have the opportunity to attend the Boston Underground Film Festival, which has an incredible lineup of genre films for your viewing pleasure (wicked pissah!). Among those screenings on March 26th is Patrick Kennelly’s acclaimed EXCESS FLESH, which will be preceded by two terrific shorts: Izzy Lee’s POSTPARTUM, and Olivia Saperstein’s RECIPE. Both films deal with complex, female-centered issues in a creepy, unique and stylish way.

A long-time film journalist, Saperstein made the transition to directing with her short film PLASTIC in 2014, and is a co-founder of the production company Bullet Cinema, which has the admirable goal of creating “pieces of cinema that push boundaries and employ strong female voices.” The folks at Bullet Cinema are currently developing their first feature length project, so keep your eyes peeled to that website. Before the screening, Saperstein took some time to chat with Daily Grindhouse about the transition from critic to director, her upcoming plans, and the evolving role of females in horror. 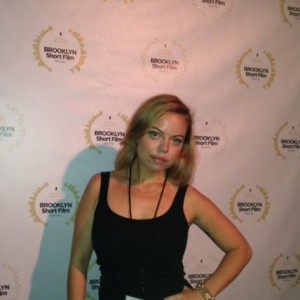 Doug Tilley: You have a background in film writing and film criticism. Do you find that puts some extra pressure on your filmed work? Do you think it’s held to a different standard?

Olivia Saperstein: I think if anything, I probably hold myself to a higher standard because I was a critic. But after I made my first short, I just had tremendous respect for anyone who does this. It’s incredibly difficult. I have definitely been a harsh critic in the past, and I’ve definitely had harsh criticism on my projects. But that has made me stronger, and only continues to motivate me to be better.

With that in mind, can you talk a little bit about your transition from writing to directing? Since you also wrote (your previous short) PLASTIC — as well as RECIPE — was it simply a way to get your vision onto the screen in as pure a form as possible?

I love critiquing films and making them, but for different reasons (other than the love for the art form itself, of course). I think I have always wanted to make movies, because I love this idea of creating your own world. But in journalism I was able to exercise my critical thinking, which I also really enjoyed. I think I just realized that I had a lot to say, and that I’m very creative, and I finally had a good idea and the right people to support me and to work with. I found that when criticizing films the same things would bother me over and over, and so I said, how about instead of complaining I just make something that does what I want it to?

There have been some major initiatives over the past few years to increase recognition – and opportunities – for women in horror. Do you feel progress is being made in opening up the genre for themes that may hold stronger appeal for female viewers?

I think there is progress, but it is slow. For instance, there always seem to be a lot more women directors at comedic or dramatic film festivals, not horror ones. The horror scene stills feels like this boys club that women have been fighting to penetrate. But I think it’s important to stop complaining about it and keep making stuff, even amidst the backlash. Jen Lynch, for example, is someone who makes absolutely terrifying films, but I rarely hear her referenced in the horror canon. Did you see CHAINED? It’s one of the scariest films I’ve ever seen, and nothing scares me. I think that XX, this women horror anthology is something long awaited, and I jumped out of my seat when I heard about it. Karyn Kusama, Jen Lynch, Mary Harron, Jovanka Vuckovic, the Soskas, this combination is an absolute force.

THE BABADOOK and A GIRL WALKS HOME AT NIGHT were two of the most successful genre films this year, and both were made by women, so that is definite progress.

Your film RECIPE is being paired with Izzy Lee’s POSTPARTUM and Patrick Kennelly’s EXCESS FLESH at an upcoming screening at the Boston Underground Film Festival. Talk a little bit about what it means to be paired with these works, and what audiences should expect from this night of provocative, progressive filmmaking.

It’s funny, I think it’s perfect to be paired with these two movies. EXCESS FLESH, I haven’t seen, but there is a direct parallel there in terms of this issue of body image. RECIPE is about a severely eating disordered young woman, and that can be found in EXCESS FLESH as well. All three films have this female on female dichotomy (“crazy” vs. “sane,” usually). I’ve seen POSTPARTUM, and it also has this awesome crazy energy. I think all three films deal with what it means to be “crazy” as a woman, particularly highlighting issues that women deal with. I mean, this isn’t some shallow girl on girl action, it’s gross and badass and awesome, but deals with some serious themes. RECIPE definitely has a comedic tone to it, though. 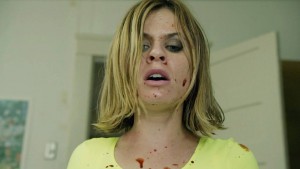 Are there any other screenings planned for RECIPE in the near future? Are you focusing on getting it seen as widely as possible at the moment, or are you looking forward to your next project?

Honestly, I haven’t heard back from other festivals yet! But I’ll let you know as soon as I do. And yes, we are very focused on it playing widely. I’m also focused on two other upcoming projects. I think it’s important to just keep making work!

For readers looking to check out your other work, both in terms of writing and film-making, what’s the best way to do so? And where can they follow your current and future work online?

None of my shorts are online yet since they are still on the festival circuit, but they should definitely check out our website, www.bulletcinema.com. That is what my amazing production team and I go by (Dre Boulet and Max Lapointe). Also, facebook.com/bulletcinema, facebook.com/recipeshortfilm, facebook.com/plastic2014. My twitter handle is @osaperstein or @bulletcinema.

Anything else to plug?

I have two other comedies on the festival circuit right now, PLASTIC, which I wrote, directed, and produced, and has been running for a year, and ELLA AT THE LIBRARY, which I directed and which was written by my friend Sam Garland. PLASTIC will play Ha! Fest in May, and ELLA AT THE LIBRARY, Visionfest. As you can see, I’m mostly a (dark) comedy gal. But I really like anything edgy. I think ELLA is the most straight-laced thing I have made and will make, but it’s fun! And keep your eye out for new projects, because I’m not stopping anytime soon! I’ll be filming my first dramatic short this summer.

Finally, what advice would you have for first-time directors looking to make an impact with their films?

Try to make something you’ve never seen before, and something that makes you feel something, that you are passionate about. To me the films that are least effective are those that simply aim to emulate their predecessors. It’s great to have inspiration, we all do, but it’s important to have your own voice. Don’t be afraid of your own imagination and weirdness. That’s what makes your stuff good! Some people might not “get it,” but courage is crucial.