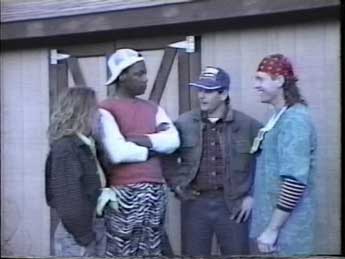 Why does this exist?

It’s a question I asked myself over and over while I was watching REDNECK COUNTY FEVER; an oddity from (possibly) the early 90s that constantly makes you wonder how it came into being. What could have possessed a group of (presumably) right thinking individuals to give up their time and money to produce something that appears to have no discernable purpose? It’s ostensibly a light comedy featuring two Bill & Ted-like misfits (except played by people obviously in their 30s), but the motivation behind its creation is difficult to work out. Aside from a title screen, there are no opening or closing credits, and the film – which runs a scant 60 minutes – doesn’t even have an IMDB page. Even the information that is out there is inconsistent. The only two possible release years I could find are 1997 or 2001, both of which seem WAY too late to be accurate. But it’s shot on cruddy home video, so it’s possible that it WAS made in the late 90s – though the Spicolli impression, Zubaz pants and Chip & Pepper T-shirts of the lead would suggest it being lensed around 1992. Maybe.

As anyone who listens to the NO-BUDGET NIGHTMARES podcast is aware, I’m actually a tad anal when it comes to credits. I find comfort in researching a film, its actors and its crew – what they worked on in the past, and what they went on to work on. So there’s something a tad disconcerting to find a film that barely seems to exist. Some research brings up the almost certainly incorrect release year, and there are some scattered short reviews here and there, but for all intents and purposes THIS MOVIE DOES NOT EXIST. Perhaps it was conjured specifically to torment me. Maybe it was some sort of weird bet that went horribly, horribly wrong. We don’t know. We CAN’T know. 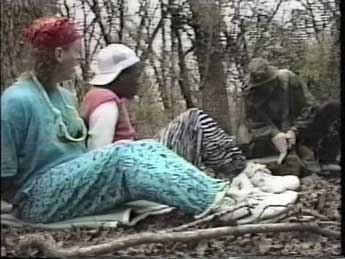 I do want to make clear that REDNECK COUNTY FEVER is in no way a horror film. It’s also not really exploitative in any way. The lurid title might bring to mind one of many 70s Hicksploitation films, or maybe even H.G. Lewis’ immortal 2000 MANIACS, but instead the tone is closer to DUDE, WHERE’S MY CAR? but – perhaps impossibly – much dumber. Our two main characters, Fred and Lowrey, are Texas college students heading home for Thanksgiving break, but after their car breaks down they are stuck in REDNECK COUNTY. Low on money, the desperate pair agree to deliver a package for a small-time gangster but instead run afoul of the local sheriff. They run off into the woods, where they get captured and – eventually – hunted by a survivalist (who also enjoys eating people). They manage to barely escape before running into a huckster who promises to fix their car, but instead steals their money and runs off. Eventually, thanks to the kindness of local sweetheart Luanne; the pair makes peace with the sheriff, help catch the local baddie, and get their car fixed in time for them to get home for Thanksgiving dinner. That is EVERYTHING THAT HAPPENS IN THE MOVIE.

What can I even say about the acting? The two leads might be ok, but since they speak exclusively in “dude” (“It’s a pretty bogus situation”) it’s hard to tell. Supporting players range from passable (cannibal survivalist) to wretched (Luanne), but sound issues plague the entire production. Boom mics are often visible in the corner of the screen, but audio quality varies significantly sometimes within the same scene. Image quality is standard early 90s shot-on-video, and the director – whoever it might be – is concerned strictly with pointing and shooting the action. In all, the production values are all pretty good, but who cares? There’s no reason for this to possibly exist. What could they have been thinking making it? Argh! 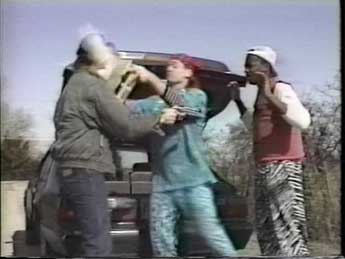 Yeah, it’s hard to know what to say about REDNECK COUNTY FEVER. Someone made it. We know that for sure. And it somehow managed to get national distribution. It’s more baffling than actively bad, but watching it is still a chore. It looks ok for a no-budget feature, and the acting is about par for the course, but even someone with as obviously low standards as myself had to dig hard to find anything resembling entertainment value. It’s a curiosity, but definitely not one that I recommend seeking out. But if you were involved in the creation in some small way, please drop me a line at doug@dailygrindhouse.com. I need to go deeper!