It’s no exaggeration to say that most low-budget short films (and microbudget films in general) tend to be rather threadbare when it comes to style. Generally, cinematic style comes as the result of resources – set dressing, lighting, lenses, and an eye for detail usually belonging to the cinematographer. But all of these cost money, and in the by-the-skin-of-your-teeth world of no-budget movies, money is a very precious resource. So when I encounter a microbudget film brimming with style, it makes me sit up and take notice.

Kalen Artinian has been dipping into short films since 2009, and each of his films show off his evolution as a director, and his ability to take advantage of talented collaborators. Genre fans are likely most familiar with his short film HELLVETICA, which toured festivals around North America last year. While that film showed off Artinian’s storytelling chops (and sense of humor), his new film RUBY’S SECRET is much more concerned with style. In the interview below, the director mentions wanting cinematographer Matvey Stavitsky to capture the look of a “perfume commercial”, and it effectively manages to do so while still maintaining a sense of menace around the edges of the frame. This menace explodes in the final few moments, where the image is bathed in violet and Ruby’s secret is finally revealed.

There isn’t much plot in the brief four minute short, and what’s here is presented entirely without dialogue. The tone is carried by Stavitsky’s gorgeous cinematography, the physical performances by the two actors, and the moody soundtrack. The action holds few secrets, with a man and woman exchanging looks at a bar before it shifts to the two heavily making-out outside the woman’s apartment. Soon they are inside and as the woman prepares, the man relieves himself – but he discovers a grisly secret in the bathroom. The final reveal won’t be too surprising for even novice fans of horror, but it’s beautifully presented, and makes for a fine, horrific punchline.

With his recent work being the most polished of his career, Kalen is gearing up to make his first feature and took some time out of his packed schedule to discuss RUBY’S SECRET, his recent focus on horror and his hilarious – and quite sensible – “shit theory”. 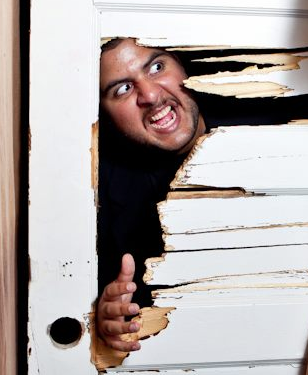 Sweetback (SB): RUBY’S SECRET‘s compresses a lot of information into its brief four minutes. For a short as focused on visuals and music as this one, do you go into it with a length in mind? Was the expectation always to make something a bit “bite-sized”?

Kalen Artinian (KA): It definitely was. The actual script is only one page long. I wanted to write something really short that we could crank out really fast.

SB: Aside from being extremely stylish, RUBY’S SECRET is also entirely dialogue-free. Was it always designed this way, and did you take that as a challenge to your visual storytelling abilities?

KA: The plan was always no dialogue and to tell an entire story only through cinematography. I love Hitchcock. You can watch any Hitchcock film with the sound off and know exactly what’s going on. I feel that a lot of modern filmmakers don’t use film language and Mise en scène as much anymore to tell a story. The majority of my favourite films are from the 70s and 80s and I feel like a lot of that artistry is gone in modern mainstream cinema. It was a great challenge to make a film that way. It’s very much inspired by the Italian giallo films I’m obsessed with. The music at the beginning is a direct homage to those films. They all start with a beautiful woman and upbeat music.

With my previous short HELLVETICA we screened at 10 film festivals, but not a single one outside of North America. No dialogue was also a way to be able to screen anywhere in the world and audiences could still understand it. One of the main goals for RUBY’S SECRET was to have the film screen outside of North America and then we had our world premiere at the Sitges Film Festival in Spain. They call it the “Cannes of horror”. It was a huge deal for me.

SB: From the straight comedy of FOUND BABY, to the drama of MOVE, you’ve dipped into a variety of genres and tones with your shorts. However, both HELLVETICA and RUBY’S SECRET delve into more horrific territory (though with obvious notes of black humour). Was that a conscious move towards more traditional genre content, or do you plan on continuing to jump around?

KA: It was a conscious move. I’ve always been into horror but for some reason I felt like I couldn’t write it and that struggle to write my first short horror film turned into the plot of HELLVETICA. To me that film is more of a dark comedy than a horror film, but maybe that’s just my strange sense of humour. The stuff I have been writing lately has been leaning more towards drama with horrific elements. I love all kinds of film but in horror/genre you can do anything and get away with it. The majority of my writing comes from a place of anger so that naturally lends itself to horror & genre filmmaking.

SB: A film so reliant on its visual style requires a talented cinematographer. What did Matvey Stavitsky bring to RUBY’S SECRET, and what sort of look were you going for?

KA: I first met Matvey Stavitsky at an advanced screening of HELLVETICA. He was doing the photography for us at the venue. He gave me his business card and a few months later when I needed a new cinematographer I checked out his reel and loved his work. I wanted the film to look like a perfume advertisement. Matvey understood what I wanted and brought some of his own ideas to the table as well. One of our reviews for RUBY’S SECRET said that it was “reminiscent of a perfume ad” and that made me very happy. We achieved exactly what we set out to do. You could cut the film right before the big reveal and throw a Chanel logo up on screen and nobody would know the difference.

SB: How has the experience of touring the film to genre festivals been? How has the audience reaction been?

KA: It’s been very positive all around. The Macabre Faire Film Festival in New York has been my favourite screening thus far. I was there with my lead actor Brain Qunitero in a packed screening room. During the big reveal in the film a woman in the audience jumped and I’m pretty positive a single tear went down my face. That was the ultimate moment for me as a filmmaker. An audience member also told me that it was the best short film he’s ever seen. I don’t know how many short films that guy had seen, but I appreciated the comment.

SB: What’s coming next for Kalen Artinian? You’ve averaged about a short film a year since 2009. Is that something you’re looking to continue, or are you hoping to branch out into longer projects?

KA: I’m trying to beat that average. I’m co-directing another short film very soon called GINGERBREAD HOUSE that my good friend and co-producer Kelsey Goldberg wrote and is starring in. I’ve also got another short that I wrote called THE INDESTRUCTIBLE that I plan to direct before the summer hopefully. I feel thats it’s the best script I’ve ever written and I want that to be my final short. I’m making the jump to feature films after that. It’s just a matter of which one we can afford to make first.

SB: For people who want to check out RUBY’S SECRET – or your previous work – what’s the best way to do so?

KA: You can check out RUBY’S SECRET at https://www.facebook.com/RubysSecretFilm and you can see all my previous work at kalenartinian.com

SB: Anything else to promote?

KA: I’m just going to promote some of the great people I worked with on this film. I like to surround myself with people better than me because it makes my work look better.

SB: Finally, what advice would you have for a young or inexperienced director looking to tackle their first project?

KA: I don’t really feel like I’m in a position to really give any advice considering how new I am in this business but I’ll pass down some great advice that has been given to me. A while back I sent a director I had interned for in the past a rough cut of a music video I was currently editing for some feedback. He gave me some great notes and he ended the email with “Just keep makin’ shit.” It really stuck with me. It changed my mindset going forward. My rate of production went up significantly after that. A year or so after that I ran into a former boss of mine at a party and I was telling him about my career plans and how people had told me in the past that if you’re good enough someone will find you. I’m a very impatient person so I didn’t like that approach at all. He told me “In this industry you don’t wait for shit.” It was great advice.

So that became what I like to call my “Shit Theory”.

Also, Robert Rodriguez’s “Rebel without a Crew” is a mandatory book for any aspiring filmmaker.