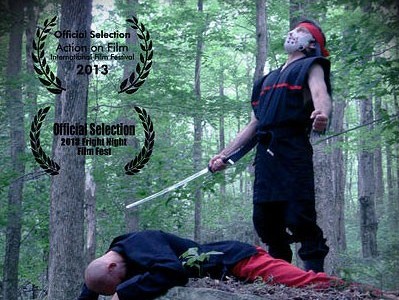 Filming action is hard, and I’m speaking from personal experience. When we were making ROCK, PAPER, SCISSORS, we (brilliantly) decided to include a scene where our intrepid hero was attacked by a diabolical pack of female ninjas. No problem, we thought. We’ll just get a few local martial arts enthusiasts to whip together some choreography and teach our (attractive, but not necessarily athletic) ninjas to flip around and wield boa staffs. Easy peasey lemon squeezy.

Needless to say, it didn’t quite work out that way. The difficulty of making two or more inexperienced actors look like they’re beating the piss out of each other has been a problem faced by filmmakers since the silent era. Often, directors make up for an actor’s lack of physical dexterity with distractions – namely, a combination of explosions and extreme violence. And while I certainly appreciate both of those things, this is no-budget nightmares, and both explosions and extreme violence cost money. Which is why I’ve always preferred the imagination and physical prowess that fuels kung-fu movies, since few things are less expensive than two people punching and kicking each other in the face.

Pennsylvania-based production company Platypus Underground certainly appreciate the simple pleasures of microbudget action, and have been regularly cranking out imaginative action films since their inception in 2012. Founders Joey Corpora, Kale Sweeney, and Shannon Lee Haines mix intentionally cartoonish plots with intricately choreographed action peppered with humor and moments of ultraviolence. While the production values tend to be a bit threadbare – most of the sets are just clearings in the woods – and the acting is extremely rough, they make up for their limitations by throwing themselves into their work: literally and figuratively. All three take on multiple roles in their films, including directing, choreography and acting, and this sort of hands-on approach benefits the films greatly. 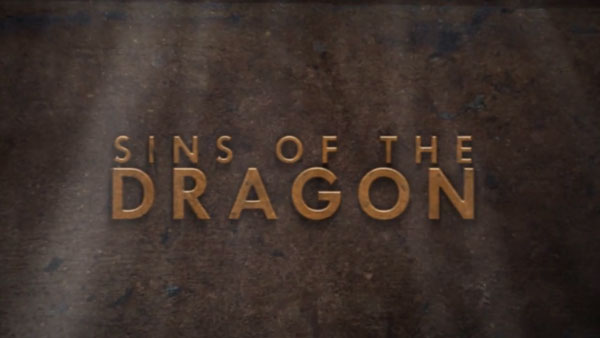 For instance, SINS OF THE DRAGON was written by Sweeney, directed by Corpora, produced by Haines and all three act in it. Obviously influenced by modern animated action series like AVATAR: THE LAST AIRBENDER, the plot involves the orphaned Cunri (Sweeney) leaving his dojo with best friend Kaia (Shannon Lee Haines) to avenge his family, who had been murdered by the evil Caligo (Marty Frankenfield). There’s also a lot of exposition involving “territories” which are ruled over by “dragons”, but at heart it’s a fairly straight-forward revenge story. It’s  a colorful, action-packed tale that seems to start somewhere in the middle of the plot, hinting at plenty of back-story that is only touched upon.

The star of the show is definitely the choreography, which shows off Sweeney’s impressive kicking and flipping, with Haines keeping up while displaying some surprising flexibility, and skill with a Japanese war fan. It’s shot and edited well, and the team is smart enough to switch between weapon fighting and hand-to-hand combat to keep things interesting. Between the fight scenes, however, things get a lot more rocky. Most of the supporting cast can’t act a lick – particularly a brief appearance by a comic relief trio of thieves – and even Sweeney and Haines have difficulty with much of the robotic, contraction-less dialogue. 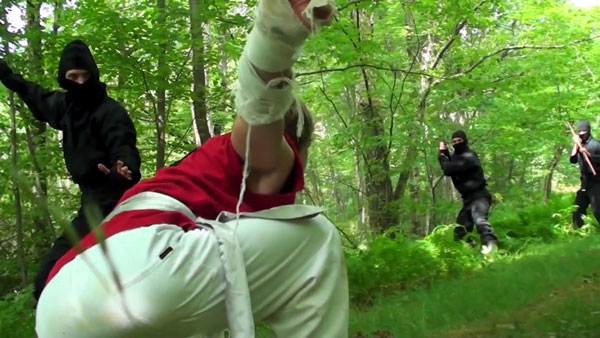 The acting is slightly better in the more recent short PRINCE ASHLEY AND THE MAGICAL CRYSTAL, though it feels even more like the audience is being dumped into the middle of a much longer story. The action, however, is still great, and there’s a much stronger reliance on comic-relief, which tends to make the limitations (and over-use of the Wilhelm scream) a bit more palatable. It’s also a more visually impressive effort, with a few digital effects and more varied locations making the whole thing  feel more complete. It only runs 10 minutes, so if you’re looking for an introduction to the Platypus Underground style, this might be your best bet.

Aside from acting and fighting, the production values are about what you expect. The costumes are colorful in both shorts, though look remarkably like video game cosplay, while the cinematography mostly involves keeping things in the frame. SINS OF THE DRAGON features a lot of terrific low-budget physical effects (by Corpora), while the more kid-friendly PRINCE ASHLEY is, understandably, a lot lighter on decapitations. 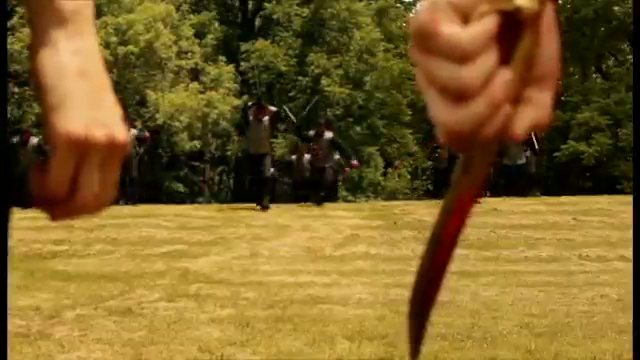 Plenty of goofy fun, Platypus Underground’s recent shorts show off the impressive physical prowess of their leads, as well as the team’s unique interest in world-building and telling large fantasy tales – or, at least, pieces of them – on a small budget. While both films are often hampered by limitations of budget, it’s easy to see how with some more resources – and a little more time on writing and acting – the group could put together something very special. Their upcoming film FINAL EVAC appears to be a more mature science-fiction work and, despite the now tiresome fake film damage in the trailer, looks to be a big leap forward in terms of visual style. Looking forward to seeing plenty more from the group.

Both SINS OF THE DRAGON and PRINCE ASHLEY AND THE MAGICAL CRYSTAL QUEST are currently available to be watched for free. Both are linked at the bottom of this review.

SINS OF THE DRAGON RATING: