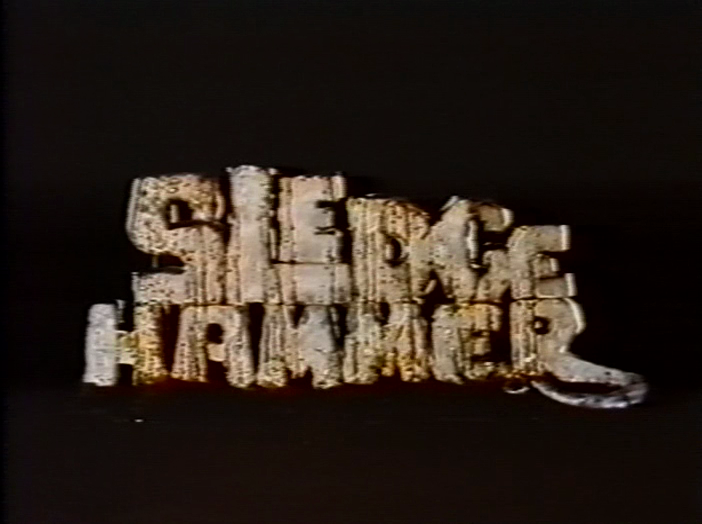 There’s something awfully noble about SLEDGEHAMMER, an absolutely essential film in the development of the straight-to-video (and shot-on-video) distribution method that would take hold a few years after its initial release. Director David A. Prior (who went on to have a respectable career in b-movie action films) took a handful of actors, an apartment (doubling for what appears to be a farmhouse) and a camcorder and decided he was going to learn how to make a movie – and while the film result SHOULD have been entirely unwatchable, SLEDGEHAMMER is a respectable early 80s slasher film in the FRIDAY THE 13th mold. It’s also a weird-ass little oddity that, while conservatively filmed, packs a respectable amount of weirdness into its 90 minutes.

The set-up is about what you would expect from an early 80s HALLOWEEN/FRIDAY THE 13TH rip-off: an alcoholic mother has a rendezvous with her illicit lover at a remote property, locking her young son in the closet when he won’t keep quiet. Eventually the woman and her beau are murdered by a sledgehammer-wielding maniac. Yes, you already know who the killer is, and, yes, it still takes a while for the characters to figure it out. Jump forward a decade, and we’re introduced to a group of surprisingly grizzled adults who have decided to have a relaxing vacation at the (sorta) cabin. They goof around – and have a messy food fight – before a spooky seance brings the killer out of (supernatural) hiding. Soon everyone is getting sledged, and the survivors have to band together to fight off the killer – though it’s at least suggested that he can’t actually be killed. 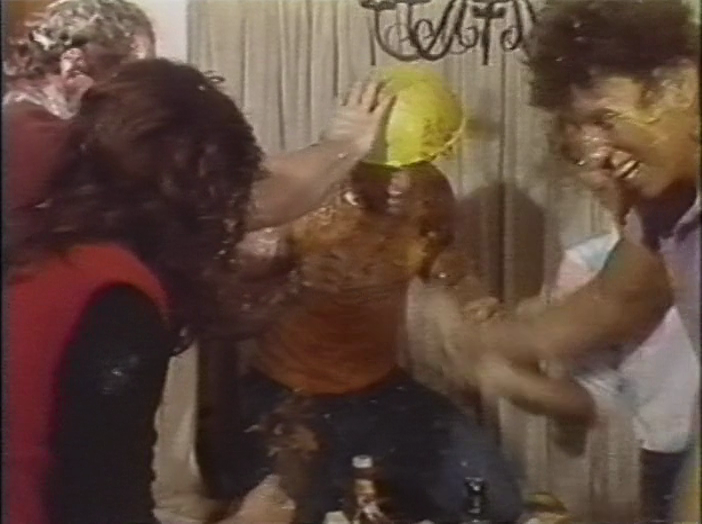 Nothing very odd about that, right? With a few adjustments, that could be the plot summary for about a dozen other 80s horror films. But, SLEDGEHAMMER is committed to doing things a little differently. For one, all of the characters are assholes. Well, ok, not ALL of the characters. Just all of the male characters. There’s the muscular, blonde Chuck (played by DEADLY PREY’s Ted Prior) who ignores his sincerely loving girlfriend and routinely balances a beer can on her head; there’s the hulking John (John Eastman) who is just an uncontrollable prick to everyone – particularly his girlfriend Mary. Jimmy (who looks like every 80s male porn star) ignores the obvious advances of his girlfriend because he’s a virgin, while the diminutive Joey (nicknamed “hand-job”) is devoted to irritating everyone around him. The women are less intolerable, but only slightly.

So it’s hard not to root for the SLEDGEHAMMER KILLER, who manages to dispatch members of the group quite efficiently considering he’s using such an awkward implement of destruction. Aside from some brain splatter in the opening scene (which is almost entirely repeated during the seance) and a pretty neat throat stabbing, it’s not too gory, but what it lacks in violence it makes up for in awkward improvised conversations between characters. One character is drinking from a liquor bottle, but then tilts back too far in his chair until the whole thing falls over! WHAT A NUT! It’s hard to understand what about this remote location was such a draw to these folks in the first place, as they could just as easily have been unlikable pricks in their own homes, but I guess they just wanted to experience that wonderfully awkward group dynamic. 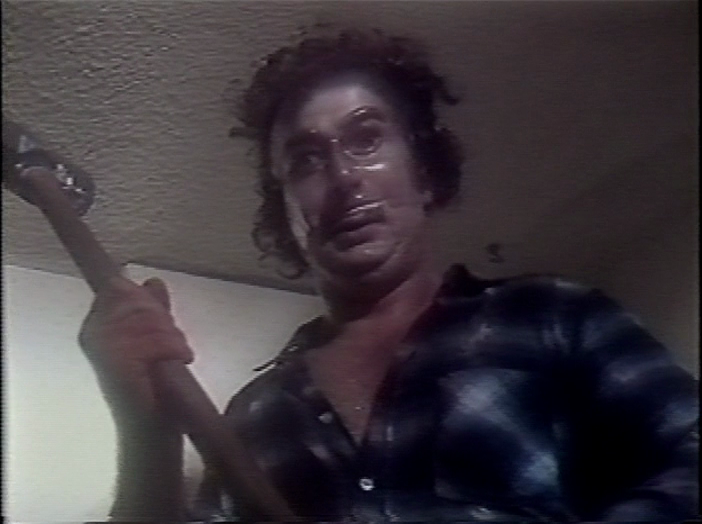 Things get wonderfully bizarre in the final twenty minutes. Faced with an unstoppable killer who has already murdered a number of their friends, the remaining survivors all decide to hide out in the living room and wait for daylight – when they’ll attempt to hike away from the location. Seems like a reasonable plan, except despite having to stay awake only three hours (with a psycho killer IN the house) they all manage to fall asleep. Oops! When dickhead John wakes up to find his own weapon missing, he goes off by himself (OOPS!) and finds that the upstairs hallway has the ability to actually teleport him into another room. Yes! Teleportation! It just gets stranger from there, including the killer appearing as an entirely incomprehensible little boy enthusiastically stabbing at a corpse.

Video quality aside – you’ll never mistake this for film, and it has that classic 80’s porno look –  SLEDGEHAMMER resembles an actual movie in a way that few of its shot-on-video contemporaries would achieve. Prior obviously has a strong grasp on the language of film, and aside from an over-reliance on cheap effects (slow-motion in particular), he tells his story intelligently and with a strong sense of the enclosed space in which it takes place. Sure, it’s just a series of rooms and halls, but effort was obviously made to give the audience an idea of the layout of the location, which helps make the stalking scenes later in the film a bit easier to swallow. While the plot gleefully laps up the usual genre cliches, the hints at supernatural elements give a layer of inspired weirdness to the whole thing, and the cast – who are uniformly wooden – still throw themselves into the material with enthusiasm. A landmark no-budget film, and one that remains surprisingly watchable.