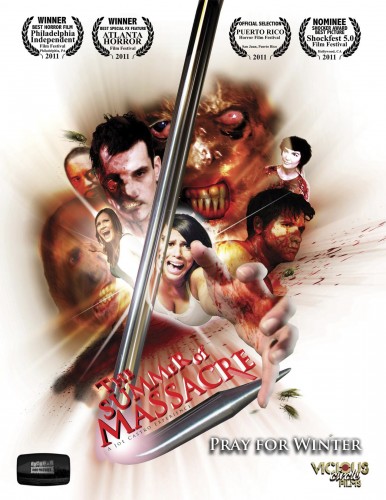 First thing’s first. Despite the similar title, Joe Castro’s THE SUMMER OF MASSACRE has nothing to do with Bryn Hammond’s execrable 2006 British horror film THE SUMMER OF THE MASSACRE. Considering my intense dislike of that earlier film, this has to be considered a good thing.

Instead, THE SUMMER OF MASSACRE is an ultraviolent, low-budget anthology film that tells five (or, more accurately, four and a half) tales of revenge which are frequently punctuated by digitally assisted gore. How frequently? Well, the front of the Blu-Ray (yes, blu-ray!) case shouts “GUINNESS WORLD RECORD HOLDER ‘HIGHEST BODY COUNT IN A SLASHERFILM’ – 155!”, though this seems to be a bit of a dubious claim. Onscreen deaths are frequent, though this number must also take in the piles of corpses that litter the background in a few scenes. Still, Castro is following the classic carnival barker style of old H.G. Lewis/David Friedman films, so I can’t fault him for making outrageous claims.

In fact, THE SUMMER OF MASSACRE most closely resembles those films of Lewis like THE WIZARD OF GORE or TWO THOUSAND MANIACS, though somehow with even less character development; but with a much more experimental and unhinged visual style. While the often cartoonishly unreal violence in the film was likely born out of necessity, the frequent use of greenscreen, dozens of layered elements, CG and other visual tricks might come as a surprise to those used to more sedate low-budget efforts. It doesn’t always look great – sometimes the hodge-podge of images look downright terrible – but I can’t fault its level of ambition, and it certainly delivers what it promises. 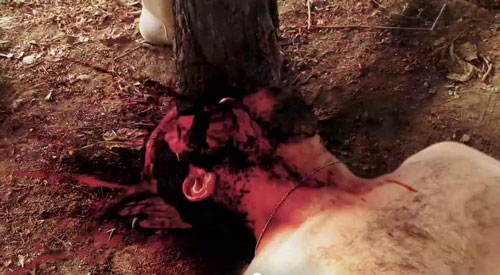 The first story is entitled RAGE, and it sets the tone and structure for the rest of the pieces. It’s an extremely simplistic storyline; a guy gets assaulted (or maybe killed – it’s a bit unclear) while jogging, and gets up to exact bloody revenge on everyone. And I mean everyone. It’s really a slasher film broken down to its most basic elements, revenge and murder without any pretensions towards anything but creating as much mayhem as possible. This is the bloodiest segment, and the indiscriminate killing starts to get a bit exhausting after the tenth of fifteenth gruesome murder, though Castro certainly manages to find some unique instruments of destruction.

Up next is LUMP, where a mentally challenged, invalid, terminally ill woman (with the titular disgusting lump on her head) is brought out into the country by her horrible sister and her friends. Sick of caring for her, the sister pushes her wheelchair off of a cliff, causing the lump to burst which somehow gives her superhuman revenge powers. She kills off most of the characters in a variety of nasty ways, before a twist ending wraps things up surprisingly tidily. Next verse, same as the first, though we get a welcome appearance from Brinke Stevens as the girls’ mother. 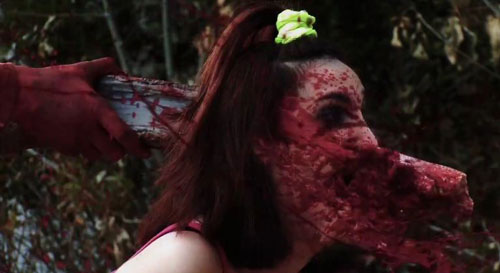 The third story is SON OF THE BOOGEYMAN, and while the visuals at this point have been fairly standard – aside from the frequent punctuations of gore – things get awfully experimental and strange in this segment. Backgrounds are frequently a mixture of live-action and CG – with some nightmarish imagery thrown in that straddles a fine line between cheesy and effective. The story involves a seemingly invincible psycho murderer who – years ago – raped a woman solely so she could give birth to a child for him to terrorize. What a dick! Flash forward to modern day when “the boogeyman” makes his return to enact hyper-violence against everyone in his past. At this point things might be feeling a bit repetitive, but the last few moments manage to strike a pleasant carnival fun-house tone that I enjoyed.

The final full-length segment is called BURN, and is the best of the bunch – and it continues to follows the unique visual style of BOOGEYMAN. At a Christian camp-out, a group of teenagers are tracked down and killed by the ghosts/corpses of two firefighters that were burned alive years earlier (one of which is played by GEORGE: A ZOMBIE INTERVENTION director J.T. Seaton). Compared to the earlier segments, there’s a fairly leisurely set-up, but it makes for a much more agreeable pace once things ramp up. Make-up artist Cleve Hall has a fun part as the priest who enthusiastically tells part of the ghost story, but the acting on the whole in this segment is poor – particularly Felip Winslett as “Vinnie”, one of the eventual victims. In low-budget productions I tend to expect wooden acting, but his line readings are just pitiful. 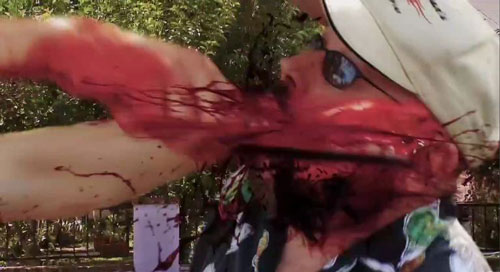 Throughout the film, there are brief snippets of “interviews” with supposed serial killers. This culminates in the film’s bookends where these murderers have combined their efforts to go on an ultimate killing spree. There’s really not much to say about the segment, but it does end in appropriately apocalyptic fashion, and the actors are fine – though not given much to do. The segments tie the film together thematically, but add little to the proceedings otherwise.

Your enjoyment of THE SUMMER OF MASSACRE is going to rely heavily on your tolerance and patience with low budget films. While Castro’s direction is by-the -numbers, the visuals are demented enough to carry the film through its many rough patches. I could complain about the lack of development and the cookie cutter characters, but the vapidness of the whole thing appears to at least partly be the point. These people are just grist for Castro’s violence mill, and he’s only happy to twist, contort and demolish the bodies onscreen in any number of unique and gory ways. All the title promises is the presence of summer – which is oddly underplayed  – and the inclusion of a massacre, so nobody can complain about false advertising. I’d just like to see Castro take his unique visual style and apply it to something with a little more depth, but THE SUMMER OF MASSACRE meets its ambitions entirely, and for that it deserves some props.