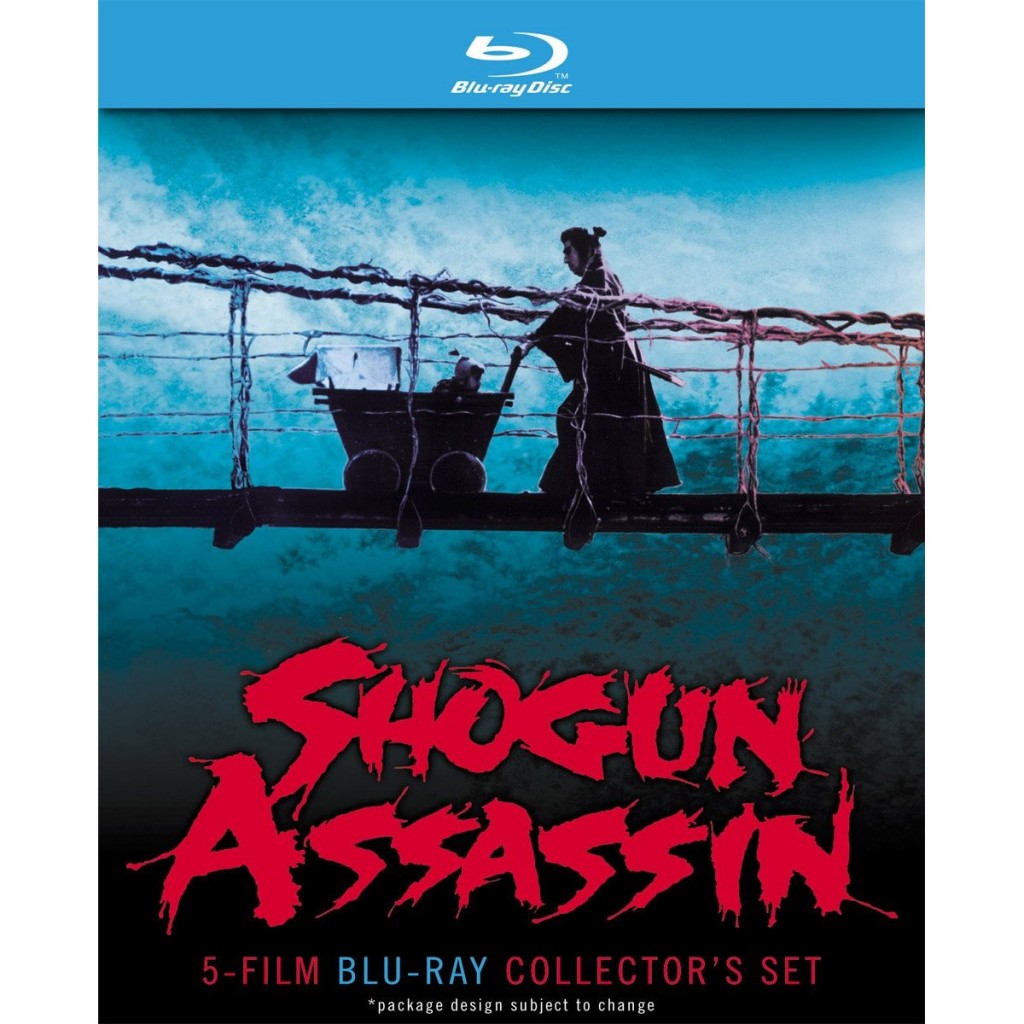 The characters were created in 1970 by writer Kazuo Koike and artist Goseki Kojima; Ogami Itto and his three year old son Daigoro, they are known to those who seek them as Lone Wolf and Cub. Together they travel Japan during the Edo period, walking between the road of heaven and hell to bring vengeance to those who have framed Ogami for the death of his wife. It is a visceral and emotional story told across 28 manga volumes that were adapted into six feature films produced between 1972 and 1974 starring Tomisaburo Wakayama (the first three films in addition to SHOGUN ASSASSIN produced by his brother and Zatoichi star Shintarô Katsu). As the father of two, the bond between Ogami Itto and Daigoro is tangible to me. Their moments of quiet communication along with the care and respect they have for one another is something rare in films. When you surround those moments by violent bloodshed and attacks around every corner, it creates a constant contrast that even after six films is just as effective now as it was in 1972. Enter SHOGUN ASSASSIN, a film that is a demo reel for editing prowess, splicing together about 12 minutes of the first film (SWORD OF VENGEANCE) and the majority of the second film (BABY CART IN THE RIVER STYX). I should hate this movie for what it did to the two original films; nobody did this to THE GODFATHER 1 and 2 (though Dan O’Bannon wanted to). I can’t though, however flawed it may be, dislike this film. It was my key to samurai cinema, my entrance to the cult of chambara. It’s the cinematic equivalent of the girl you know is a little bit nuts, you have no desire to date, but goddamn the sex is fucking hot as hell. I don’t know if that analogy works or not but in my head it sounded brilliant.

SHOGUN ASSASSIN follows Ogami Itto and Daigoro as they seek vengeance on The Shogun (gone is any mention of the Yagyu clan from the original film) for killing Ogami’s wife. Though the events leading to her death differ from the original version, revenge and massive bloodletting ensues. You won’t find the more culturally oriented subplots, abandoned are the wealth of flashbacks from the first film, tossed aside are names and sounds that hold significance throughout the series. Who needs’em? This is a stripped down, exploitation riff on the first two films. Revenge is at the core the series so the producers of SHOGUN ASSASSIN decided to toss out anything but 100% all revenge, all night. If revenge is a dish best served cold, it’s a goddamn freezer in this motherfucker.

As mentioned, there is a lot I like about this film, however unnecessary it may be. I think the internal narration by Daigoro humanizes him in the context of this film. I dig the soundtrack recorded by Mark Lindsay from Paul Revere and the Raiders. I actually like it better than the one used in the first film, it sounds like it would be just as good in Sonny Chinba’s THE STREET FIGHTER as it is in a samurai film. I also really like the voice actors brought in for the dubbing. Using a script that was partially written by a deaf and mute couple brought in to read the lips of the original actors, it is some of the best dubbing work I have heard/seen/whatever.

Yes, this is an inferior film to the first two films in the LONE WOLF AND CUB series. Through the re-writing of the story it sets up the viewer to be confused if they continue on to the next film, they will miss the nuances and even the humanity of Daigoro and Ogami Itto. Here’s the thing though, I look at this flick as a gateway drug; take the red pill and see what’s really happening in the LONE WOLF world. This film is part of the reason why I am writing this review, it sparked an interest and a curiosity in a genre which grew and developed a passion for cinema which eventually lead to Daily Grindhouse. It’s one of those moments when I can look back and remember exactly where I was when I watched it and knew… with everything in my fucking being… that it had stirred something in me to go deeper. Yeah, it ain’t SWORD OF VENGEANCE or BABY CART AT THE RIVER STYX… but damn I dig it. 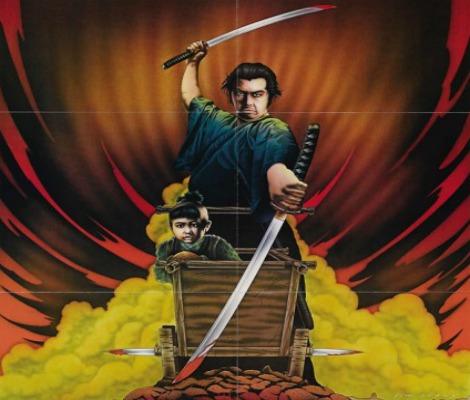 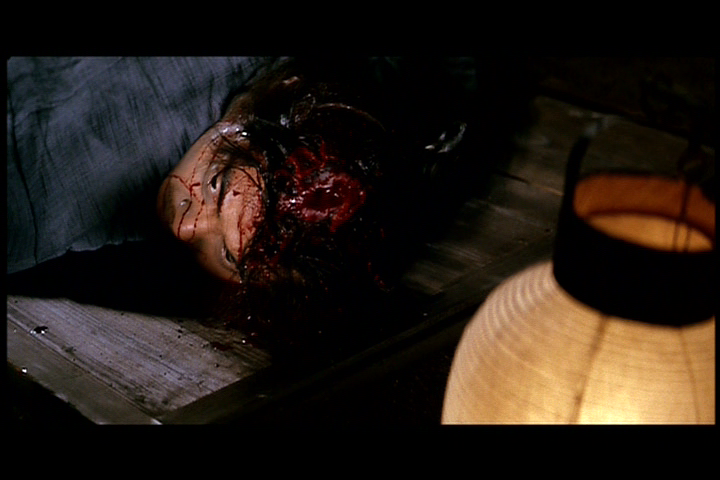 Few films in this series are flawless but each one is completely unique and a classic in its own way. LONE WOLF AND CUB: BABYCART AT THE RIVER HADES (aka SHOGUN ASSASSIN 2: LIGHTING SWORD OF DEATH) feels like director Misumi Kenji finally found the right balance of action and drama culminating into one the most spectacular finales in the history of samurai cinema. Nothing can prepare you for the battle at the end of this movie, or the POV shot of the rolling, decapitated head. I have always felt that Tomisaburo Wakayama (Ogami Itto) was a very gruff interpretation of the character in the Lone Wolf manga, but in this film, it’s hard to imagine anyone else pushing the cart. He is expressionless but never distant. If the first one was too slow, the second to over-the-top, then this one is perfect.

LONE WOLF AND CUB: BABY CART IN PERIL (aka SHOGUN ASSASSIN 3: SLASHING BLADES OF CARNAGE) sees series director Misumi Kenji taking a break, and while it was tough to imagine a LONE WOLF film without him calling the shots, Saito Buichi created a passable film even though the ending feels like Buichi borrowed a bit from the ending of the third film. 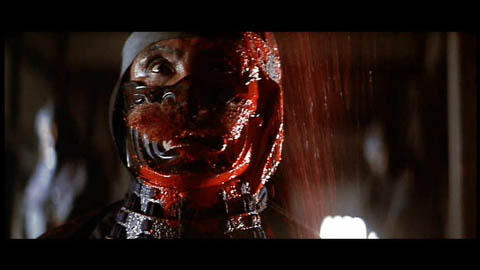 Kenji returned to direct LONE WOLF AND CUB: BABY CART IN THE LAND OF DEMONS (aka SHOGUN ASSASSIN 4: FIVE FISTFULLS OF GOLD). This is the most interesting film in the franchise. Five opponents, each with 1/5 of the fee to carry out Ogami Itto’s mission he is hired for. The final confrontation in this film, while lacking the scope and ambition of the 3rd film, is very satisfying. 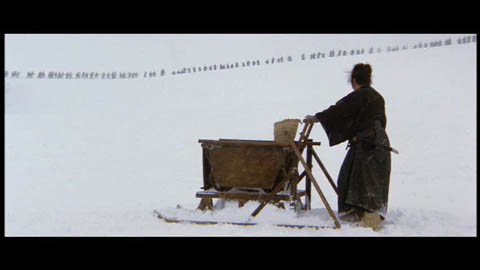 Kurado Yoshiyuki took over for an ailing Kenji and created a film that is every bit bat-shit crazy as the second film is over the top, two words: Ninja Zombies. Much debate has followed the ending of LONE WOLF AND CUB: WHITE HEAVEN IN HELL (aka SHOGUN ASSASSIN 5: COLD ROAD TO HELL). I won’t spoil anything but I will say that I think the general point is that revenge is never over. 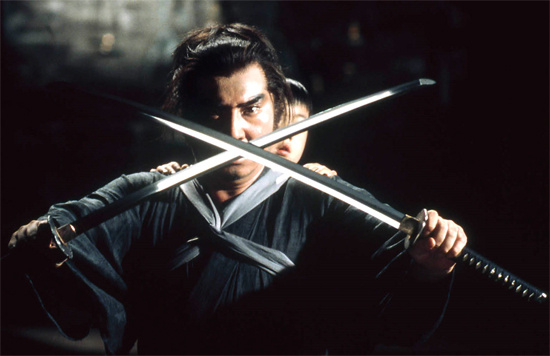 When SHOGUN ASSASSIN was originally released on Blu-ray by AnimeEigo it was a pretty stunning transfer. I am not a guy that gets into the mechanics of a transfer, I just know when something looks good and when it doesn’t… and this shit looks good. The release of SHOGUN ASSASSIN in the 5 film set is the same disc, same special features, and the same animated menu. It looks amazing. The same cannot be said however for the four other films all located on the second disc. I don’t know if it’s because they are so compressed, if the same care for the first release failed to go into the release of the remaining films or a little bit of both, the picture is clearly not to the standards set with the SHOGUN ASSASSIN release. Having said that, they look better than the original versions do on DVD and because of that they’re worth the coin.

So there we go Bastards, a look at the latest release from AnimEigo. I wish this set was coming out with a little more fanfare. It would have been great to see more special features, a better restoration process for the sequels, and better general box presentation. That being said, I am happy to have these films on Blu-ray, they have never looked this good… but I am still happy to have the original DVD release with the original audio tracks even if the picture is inferior to these. I hope AnimEigo at least gets around to giving the originals the treatment they gave these… but they could be doing a giant solid to film community by giving each one a SHOGUN ASSASSIN Blu-ray quality release. This is still worth picking up, Bastards. If this is your first time with these flicks though, choose the red pill and watch your world expand.