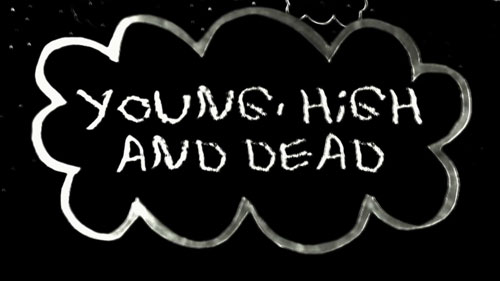 Ah.. the woods. Such a glorious place to set a microbudget film. Anything goes! And you have the freedom to scream your head off, make a big mess, and run around as much as you like. It’s why so many slasher films are set there, and why so many of the films in this column tend to find their way there. The woods are cheap, available, and trees won’t yell at you for making too much noise.

Luke Brady’s UK-lensed YOUNG, HIGH AND DEAD certainly makes use of the permissiveness of the greenery, though he also spends plenty of time setting up his characters before leaving them to the mercy of the forest. In fact, he spends an inordinate amount of time on set-up, to the point where some viewers might wonder if this slasher film will actually feature any.. slashing. Eventually it gets as messy as you might expect, but it’s all a bit too little, much too late. 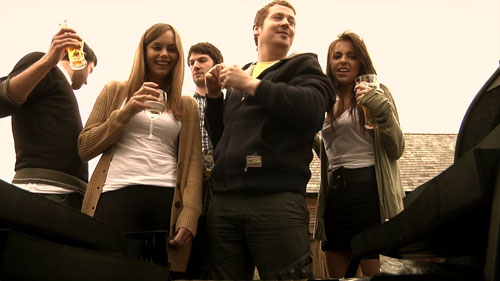 A plot summary might seem a bit superfluous for those familiar with the slasher genre (aka all of you), but let’s go down the list. Group of young people (CHECK!) head off to the woods (CHECK!) for a weekend of drugs (CHECK!) and premarital sex (CHECK!). Once there, they are stalked and murdered (CHECK!) by a pedophile (Uh.. CHECK?) and his demented mother (?). There’s an axe (CHECK!), plenty of blood (CHECK!) and an adorable dog (AWWWWW!). There’s also a particularly unpleasant POV rape scene, which doesn’t seem to have any particular purpose aside from adding to the unpleasantness on display.

In this case, excessive character development ends up murdering YOUNG, HIGH AND DEAD’s pacing. When the characters finally wake up to find themselves chained to the ground, it’s meant to be terrifying – with the group acting understandably confused and scared. But after spending an hour of the ninety minute running time with these characters, I had already decided I didn’t much care for them. Those that are likable are inoffensively bland, while the rest are simply unpleasant.. but not in a way that would make the idea of their demise particularly appealing.

Perhaps refreshingly, the actual killer is entirely nondescript. Not particularly hulking or imposing, his most notable scene – and the most effective scene in the film – involves him visiting a hardware store and casually purchasing items we know are to be used for the imprisoning and assault of children. There’s a quiet menace to this sequence, though we’re mercifully spared the visuals of him actually using the equipment. The later reveal that he’s not working alone doesn’t quite work, but it’s unusual to see a killer presented so matter-of-factly. 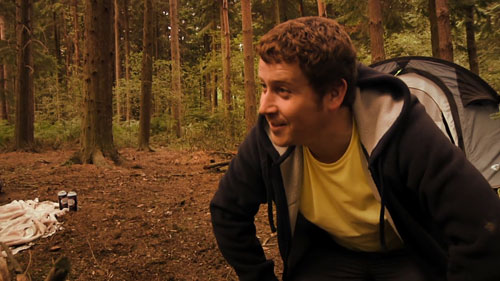 Despite the pacing issues, the first hour is still quite watchable thanks to some polished performances; particularly Philip Barantini as the intensely (and believably) unlikable John and Nigel Boyle as the token goofball stoner. While both characters border on irritating, the actors are able to bring some extra dimension to their stock roles. The female leads fare less well – not because of the quality of their acting, but because their parts are underwritten. There’s an attempt to give both characters some last minute dignity and strength, but it never really comes off.

Equally odd is the decision to add a blue tint to the climax of the film. It’s meant to suggest the action taking place in the dawn “magic hour”, but instead just gives the whole ending a sickly, unpleasant pallor that takes away from some of the impressively composed visuals. Brady (and his THREE credited co-directors) had used the remote location quite effectively up to this point, but everything starts to look bland and cold just when things are meant to heat up. 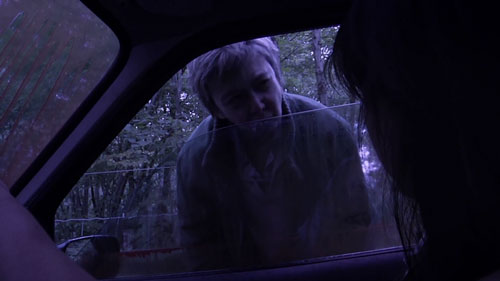 A slowly paced slasher that eventually collapses under the weight of its own set-up, YOUNG, HIGH AND DEAD shows moments of real talent both in front of and behind the camera, but never manages to coalesce. When things kick into high(er) gear, the film is neutered by some stylistic decisions, and the stock characters only occasionally rise above cliche. In a genre that relies so heavily on pacing, spending so much time with bland personalities is unforgivable. At least the woods looks nice.

Four Nightmares out of Five = Not Much Fun