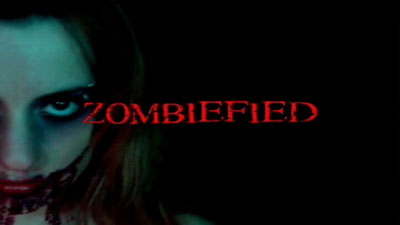 Todd Jason Cook is a true renaissance man. Professional skateboarder, musician, writer and film-maker; Cook was part of the first-wave of ultra low-budget shot-on-video directors cranking out genre films in the early to mid 90s, following quickly in the footsteps of (later) friend and mentor Todd Sheets. Sadly, after dominating no-budget horror throughout the decade, Cook stopped making genre films after 1998’s NIGHT OF THE CLOWN; narrowly missing the rise of digital cameras and non-linear editing suites that would put film-making power into the hands of the consumer in the early 2000s. After more than a decade focusing on professional skateboarding, Todd is back with the slasher/zombie film ZOMBIFIED. But is he able to recapture the energy and charm of his earlier work?

We’ve already covered Cook’s most well-known film – 1995’s delightfully goofy DEATH METAL ZOMBIES – in both the NO-BUDGET NIGHTMARES column and on the podcast. But the most notable thing about ZOMBIFIED is that it’s actually a follow-up to DMZ – and brings back many of the cast for small appearances. In fact, a recent re-release of DEATH METAL ZOMBIES included a newly filmed coda that transitions directly into this film. Cook denies it being a straight sequel, and there are some inconsistencies, but fans of DMZ will get a kick out of seeing what everyone now looks like. But despite these returning elements from the first film, ZOMBIFIED has a much different – and darker – tone, though there’s only so dark you can get when your plot revolves around a death metal song that turns people into flesh eating zombies while a masked serial killer terrorizes the neighborhood. Still, while the earlier film relied heavily on over-the-top moments, ZOMBIFIED is much more a traditional slasher film which also just happens to feature gut-ripping and organ munching. 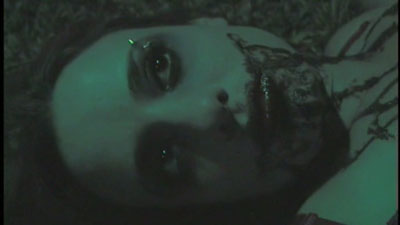 Cook himself returns as Tony, but he’s no longer the metalhead comic relief that he played in the first film. In fact, despite actually being turned into a (headbanging) zombie in DEATH METAL ZOMBIES, his character in this film – a musician – seems to have little memory of the near zombie apocalypse that occurred. I guess after a near-zombie apocalypse, you just prefer not to talk about it. Tony plays guitar in KILL ORDER, a metal band whose concert turns into a zombie bloodbath after the demonic metal song is played over the P.A. during their set. Meanwhile Tommy (Mike Gebbie from DEATH METAL ZOMBIES) has stumbled upon the tape with the original song that he played backwards to stop the evil in DEATH METAL ZOMBIES. The band has to combat an increasing number of the living dead while also fighting off a demented killer in a Richard Nixon mask who seems to have something to do with both this zombie outbreak, and the one from years earlier.

Cook began his film-making career making fan-film tributes to FRIDAY THE 13TH, so it’s little surprise that ZOMBIFIED embraces the stalk-and-slash genre and shows an intimate knowledge of the conventions. While there’s still plenty of gory zombie kills, the climax owes much more to HALLOWEEN and FRIDAY THE 13TH than it does to any of the Romero DEAD films – which considering the number of terrible low-budget zombie films in recent years, is probably a wise decision. Fans of DEATH METAL ZOMBIES who never quite understood how the serial killer tied into things might be a bit surprised to see how much emphasis is placed on the killer in this film, but Cook is able to meld the two genres deftly. 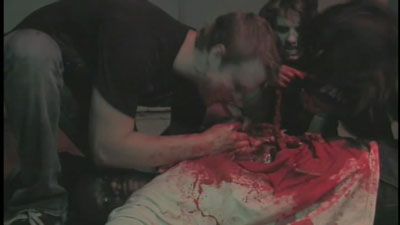 As is expected when it comes to a cast full of (mostly) amateurs, the acting is a mixed bag. Cook does a fine job, and while his bandmates in the film are stiff, they at least seem appropriately terrorized. Supporting players run from perfectly ok – Kathryn Rene’ Ginzel doesn’t get much to do, but she does it well – to absolutely pitiful, though the worst actors tend to only be in brief, one-off scenes before being murdered. I would have liked to have seen Bill DeWild (who starred in DEATH METAL ZOMBIES) get a bit more screen time, but his acting style is certainly more suited to the more comedic tone of the first film. 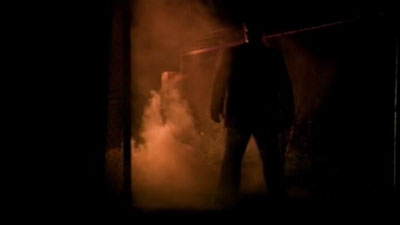 For gore fans, there’s plenty to love here – lots of stabbing, slicing, chopping and (of course) gut munching and flesh chewing. Cook shoots with an obvious eye towards composition, and while things start to get bogged down in random zombie attacks at the half-way mark, things pick up again before the climax. The action is well edited, and even when characters get separated and events start getting spread out, it’s always clear who is working on what. These might seem like small compliments, but these sort of fundamentals are what separates an experienced low-budget director like Cook from a first timer.

While not strictly a sequel to DEATH METAL ZOMBIES, fans of that film will find a lot to love in Cook’s accomplished return to the genre fold. Embracing his love of slasher films, ZOMBIFIED makes for a unique take on zombie horror and a consistently fun – and bloody – watch. With any luck, this will be the first of a new string of Todd Jason Cook low-budget horror epics.

Join me this week for an interview with ZOMBIFIED director TODD JASON COOK!