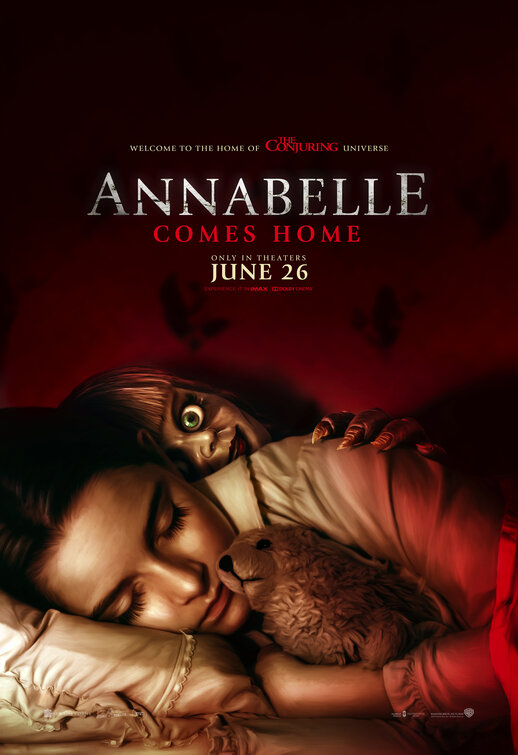 The haunting and deeply questioned career of demonologists/paranormal investigators Ed and Lorraine Warren seemed like the very last thing that would lend to a cinematic shared universe, but after the two main CONJURING entries, an army of spinoffs has pervaded theaters since — all of them based on otherwise insignificant details from the series. After THE CONJURING, Warner Bros. moved forward with ANNABELLE, directed by THE CONJURING’s director of photography John R. Leonetti. It made for only a mediocre experience due to its weak script, weaker ending, and uninspired casting, although it managed a handful of creepy scenes. Following THE CONJURING 2, Warner then announced two spinoffs: THE NUN, based on the creepy visage of demon nun Valak (which was only ever a machination of in-film Lorraine Warren’s imagination) and THE CROOKED MAN, which is dated for a 2020 release. (If you can’t wait, there’s a direct-to-video knock-off starring Michael Jai White!)  Following that came ANNABELLE: CREATION, the prequel to the prequel to THE CONJURING, directed by LIGHTS OUT director David F. Sandberg. To say that it’s better than ANNABELLE would be an understatement. It was actually one of the most frightening films of the year. Following that came THE CURSE OF LA LLORONA, which didn’t have squat to do with the series, minus a small part where a familiar character shows up to influence that connection. (It doesn’t work, but that doesn’t matter, as the film itself was very bland.) Now there’s ANNABELLE COMES HOME, the third and purportedly final entry in this particular offshoot of the CONJURING series, which comes under the helm of longtime series screenwriter Gary Dauberman (IT; IT: CHAPTER TWO) making his directorial debut.

The ANNABELLE series rides kind of a stupid concept: a creepy-looking doll that demons like to hang out with. That’s…primarily it. Though the first ANNABELLE wasn’t by any stretch a “good” film, it didn’t turn the doll into some kind of living Chucky doll murderer that sprang to life at night and set up booby-traps around the house. It respected the maturity and class of the CONJURING series by maintaining the idea of the doll being used as a conduit by demonic entities and it didn’t take any ridiculous liberties. ANNABELLE COMES HOME follows that same mold, with results more effective than the first film, though not as successful as the second. However, to be fair, ANNABELLE COMES HOME is designed differently than the previous outings. ANNABELLE vied to feel as much like THE CONJURING as possible but without being able to rely on ghostly visages. ANNABELLE: CREATION, however, pushed supernatural horror to its breaking point, turning the events in that isolated farmhouse into something disturbing, in part due to some graphic violence the consistently R-rated series had otherwise avoided. ANNABELLE COMES HOME is THE CONJURING meets POLTERGEIST (aka INSIDIOUS) – a fun, spookshow experience designed to feel like you’re walking the narrow halls of a haunt during the Halloween season. It’s the highest concept yet of the series, one built on pure scares, and made with the mindset of, “Hey, let’s just have FUN.” A horror version of NIGHT AT THE MUSEUM, ANNABELLE COMES HOME literally brings to life previous cases (allegedly) investigated by the Warrens, or artifacts tied to said cases, and these come in different forms. Not to pull my hipster card, but as someone intensely interested in the paranormal, I’d read about the Warrens years before THE CONJURING became a phenomenon, chief among them a book called The Demonologist, which delved heavily into the Warrens’ background and many of their cases. To my memory, none of the specters that appear in ANNABELLE COMES HOME are based on the reality confined to that book and the Warrens’ body of work — not even in exaggerated forms. Basically, the creepy things that stalk our characters reek of Hollywood hokum, even if the Warrens “worked” a case involving a werewolf, which was rumored to be the plot of the third CONJURING. (Oh, I’m calling it now: Warners is going to announce THE FERRYMAN within the year.) Again, Dauberman’s approach is to create a pure, horror-based environment where nightmares walk, all to thrill his audience, and he mostly succeeds.

Warmly, Vera Farmiga and Patrick Wilson make brief appearances that bookend the film, notably at the beginning that sees them bridging the gap between the opening moments of THE CONJURING, during which they take possession of the Annabelle doll, to ANNABELLE COMES HOME, which sees them bringing the doll home and experiencing spooky things along the way. It’s nice to see them, as these spinoffs have lacked their appearance (some for obvious reasons) and it grants this newest spinoff a touch of legitimacy. However, it’s a trio of kids who become our main characters, chief among them Judy, the Warrens’ daughter (Mckenna Grace, who excelled in another recent superior horror effort, THE HAUNTING OF HILL HOUSE, and who replaces previous CONJURING actress Sterling Jerins), along with her babysitter, Mary Ellen (Madison Iseman), and her mischievous, trouble-making friend, Daniela (Katie Sarife). Despite the typical horror-movie carelessness that causes Annabelle to become free of her mystical, magical glass prison and animate the evil in the Warrens’ Occult Museum, it’s founded on an honestly touching moment, which helps to offset that it’s one of those face-palm moments where a character makes a stupid decision and starts a whole bunch of shit.

Warner Bros. continues their strong releases as far as the techy stuff goes. The video presentation is stellar, getting a lot of mileage out of the film’s excellent production design and attention to detail, without losing any definition in the mostly dark-set film. Audio, in the form of a Dolby Atmos track, is incredible and absolutely aids in the creation of ANNABELLE COMES HOME’s many scares. Composer Joseph Bishara returns to the series after having sat out ANNABELLE: CREATION and does a commendable job of taking the series’ established themes and weaving them into a new musical score.

Warners, however, don’t normally flourish in the supplements department when it comes to their genre releases, and ANNABELLE COMES HOME is no different. A handful of brief featurettes along with eleven minutes of deleted scenes are all she wrote. Farmiga and Wilson appear in support of the film, with Farmiga emphasizing, as she always has, that the CONJURING series is primarily a love story, with all the horror stuff ranking second. 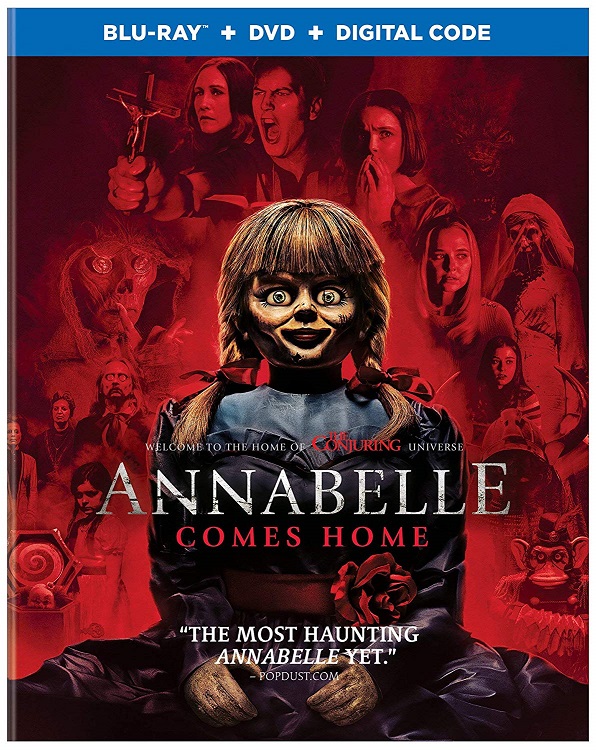 ANNABELLE COMES HOME isn’t the best of the series, but it’s the purest and makes for a fun, inconsequential watch during the coming Halloween season. The series has been all over the place, chronologically, and used up seemingly every timeline in which to tell a story, but if the audience demands it, there’s no keeping a good doll down. (Technically, a film could be made about the three college students featured in the opening moments of the first CONJURING who started all this trouble in the first place – Warners, please send a check to the DG offices to my attention.) As someone who prefers original horror to endless sequels, I do hope this is the final entry, but based on what this series has offered so far, I’d certainly see what else Annabelle has up her tiny sleeves. 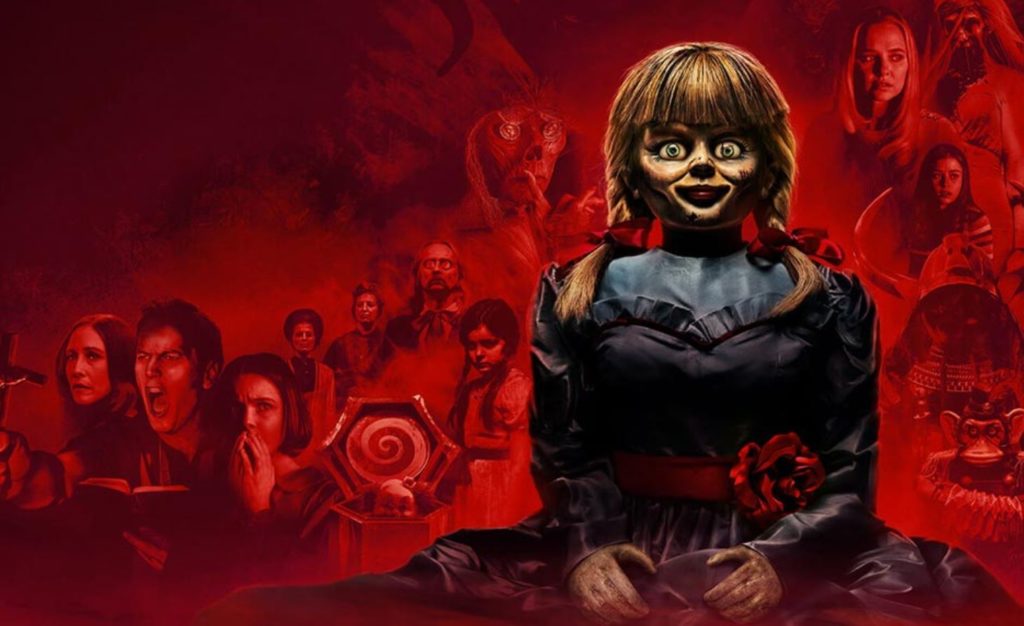