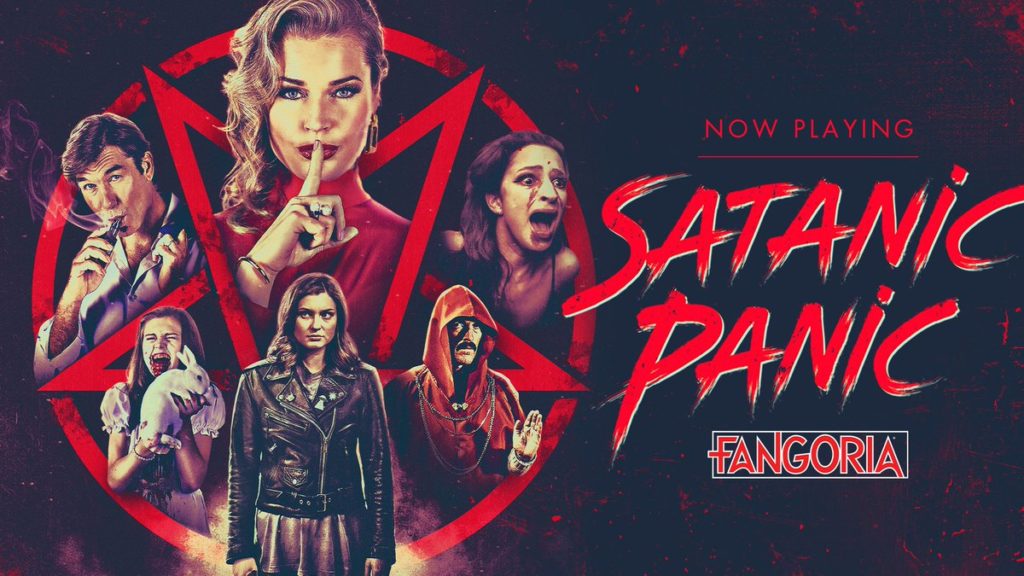 Maybe I’m just a blowhard, but I’m a tough sell when it comes to horror-comedies. In my experience, most people don’t know how to straddle that line. Thirty-plus years later, I still point to THE RETURN OF THE LIVING DEAD as not just the ultimate horror-comedy, but the sterling example of how to marry the two genres. Call it comedy-horror or horror-comedy – regardless of the order, the horror genre is a heavy presence, and you can’t only dip your toe into the horror pool. A horror-comedy should still be mostly scary, and when lacking that, at least mostly gory. Even the genre term “horror-comedy” suggests a fifty-fifty experience, but ideally, if your horror-comedy isn’t mostly horror-based, you’re doing it wrong, and if I had my druthers, filmmakers would be forbidden from name-dropping the H word when pitching their movie. I hereby decree it.

SATANIC PANIC, the latest horror-comedy to come down the pike, isn’t scary. I’m not sure it’s trying to be, as its visuals lean mostly toward robed cult members committing body violence against unsuspecting victims. While it does shy away from anything overtly supernatural given its demonic design and influences (although there are some black magic flourishes), it’s still quite gory — the fun, rubber, practical kind of gory, instead of the very poor looking CGI that lots of low budget horror productions present and can almost never afford. Another thing to its credit is the very likeable lead, Sam (Hayley Griffith), an atypical final girl for this kind of genre. Griffith, as Sam, fully embraces the manic, neurotic, and nervous tone of her character as she begins facing off against, basically, Beverly Hills 90666. Through director Chelsea Stardust’s design, Sam is aware of the ridiculous situation in which she finds herself, and her bumbling and shy personality brings a lot of humor to the various and deadly situations that come her way. Her character successfully channels the audience watching this totally nuts fiasco, and she exudes much of the same disbelief and frustration regarding the conflict as much as the audience does when seeing it all unfold.

Even with all the carnage, violence, humor, and stunt casting, SATANIC PANIC actually gets the most mileage from the friendship between Sam and Judi (Ruby Modine), the target of her Satanist mother’s diabolical and demonic deeds. Sam is the meek and bumbling virgin, while Judi is…definitely not that; as their uneasy alliance builds towards a believable friendship, it adds a lot of unexpected emotional weight to the flick and helps to heighten the stakes once things really become dire for them both. (Also look for A.J. Bowen, who has become one of my favorite horror personalities. Like director and actor Larry Fessenden, filmmakers seem to cast him if their script has a character who has to die violently, and Bowen is always eager to fulfill that role.) 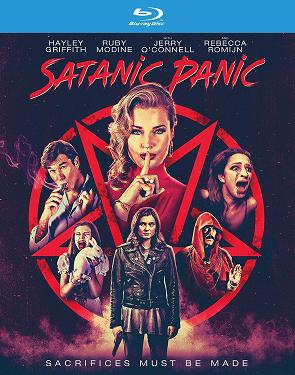 The special features included on this release are as follows:

Though it’s not entirely successful, SATANIC PANIC is an amusing horror-comedy, mostly due to its cast, especially with Romijn in a role that’s very outside her normal oeuvre. The humor doesn’t always work, and can feel forced at times, but there’s enough genuine emotion to fall back on so it doesn’t leave SATANIC PANIC feeling like a wholly empty experience. Enough of the humor works, and the bloody effects will certainly satisfy the gore hounds. Take that, add in the emotional element (ignore the conveniently tidy ending), and there should be enough to satisfy the horror fan looking for something grisly and amusing. (And if that’s not enough, don’t forget the DTF Jerry O’Connell!)