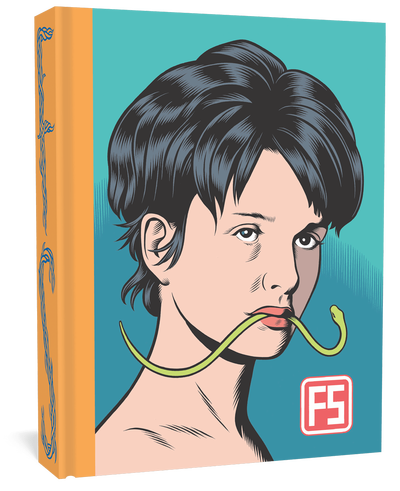 For nearly two decades, celebrated comics auteur Charles Burns has been occasionally self-publishing a “secret” ‘zine that he gives away to — I dunno, a select few people in his “inner circle,” I suppose is the best way to define it. Friends, fellow cartoonists, for all I know maybe even the occasional critic. Not that I’m one of them, mind you, but despite never landing a copy personally I’ve certainly heard tell about it — a “process ‘zine” of sorts, featuring everything from rough sketches to finished drawings, some of which make their way into Burns’ widely-released work, most of which don’t. It’s called Free Shit, and now the entirety of its contents (as far as I know, at any rate) have been made available to the unwashed masses via a nice little digest-sized hardback published by Fantagraphics.

On first flip-though — as well as subsequent ones — it certainly looksinteresting,enough, especially if you’re a Burns fan (which, for the record, I’ve always been), but whether or not it’s anything like an essential purchase for anyone else really is an open question. I mean, is there any particularly compelling reason for somebody who’s not into works such as Black Hole or the Last Look trilogy to be overly concerned about the creative process that went into making them, or to be interested in what else Burns was up to concurrently with his creation of those projects? 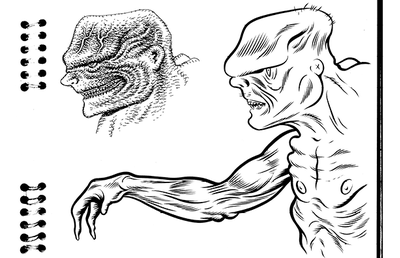 The answer to that likely lies somewhere along the continuity curve between “probably not” and “definitely not,” but that doesn’t preclude this collection from having any value. For one thing, most of the drawings are cool to look at — not the most rigorously academic observation one can make, admittedly, but still the truth — and for another, even the mast casual perusal of this selection of “behind-the-scenes” imagery offers a glimpse into the processes both mental and physical Burns goes through while no one’s looking but himself. In that sense then, yeah, there’s value here — but how much can be measured in roughly equal proportion to each individual reader’s interest in the guy who drew it all.

For my own part, I admit to having had a good time exploring this gallery of the grotesque, but it definitely remains to be seen whether the book, its contents having already been taken on board, lures me back with some sort of siren call, or merely collects dust on the shelf, which puts me in the rather unique position of being able to adopt a “tale it or leave it” approach to the collection, even though there’s no compelling reason to go so far as to actually dislike most of this stuff. 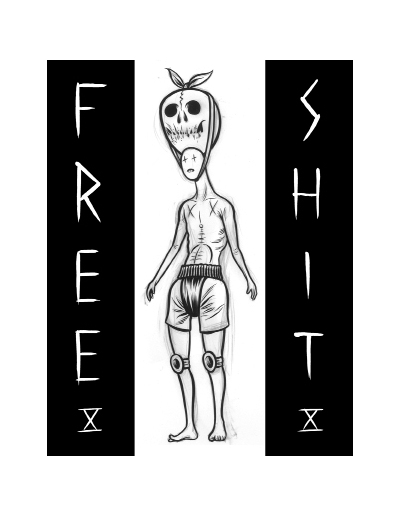 Call this a cautious and heavily qualified “buy” recommendation, then, if you must call it anything at all — for Burns-backers, it’s fascinating at the least and borderline-essential at the most, while for everyone else it makes for a rather delightfully unpleasant “leafing through it because, hey, it exists” time. There’s no shame in that, of course, and while multi-faceted storylines that speak to readers on levels from the emotional to the intellectual and all stops between have always been — and, one would imagine, shall continue to be — Burns’ stock in trade narratively speaking, we all know that far more effort goes into drawing comics than it does into writing them, and as a short-form presentation of its author’s methodical approach to the creation of art, Free Shit actually distinguishes itself in comparison to other, similar works by (inevitably lesser) cartoonists. I’m reliably informed by means of those who know the man far better than I that half-assing things just to get them “in the can” has never been the Burns MO, and certainly there’s evidence aplenty to back that notion up on the pages is this dense little volume. 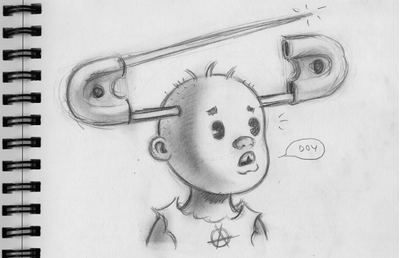 If, then, this sounds like the sort of thing that you’d be into, then you’re likely to be into it a lot. And if not, well, you can hang onto your $19.99 and find something more up your alley to do with it. Either way, you can’t lose, and that’s more than you can say for a hell of a lot of comics (or, in this case, comics-adjacent) publications crowding up LCS and bookstore shelves these days.