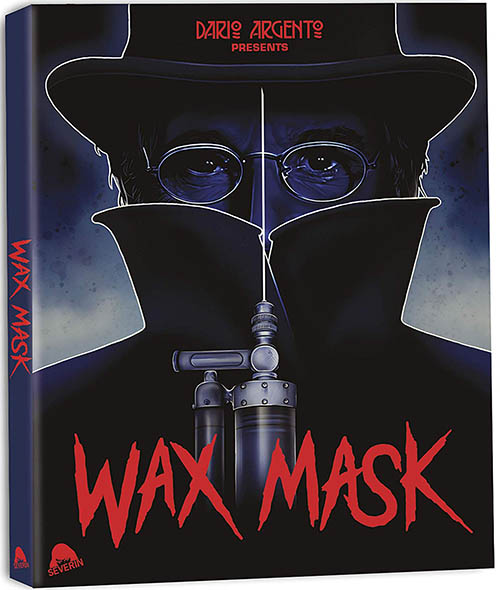 If you’re a horror lover, and if you’re on this site you likely are, then by now you’ve likely seen Vincent Price’s 1959 horror classic HOUSE OF WAX, itself a remake of 1933’s MYSTERIES OF THE WAX MUSEUM. Based on the unpublished short story “The Wax Works” by Charles Belden, the concept about an owner of a wax museum moonlighting as a killer and turning his victims into wax dummies as a means to get rid of the evidence has been used numerous times, the most recent example being 2005’s HOUSE OF WAX. The Price version is certain to go down as the definitive take on the story (with an honorable mention for TOURIST TRAP), but as you can see, that didn’t stop people from trying new iterations.

One of those attempts is 1997’s THE WAX MASK, produced by legendary horror director Dario Argento, who also provides the story alongside another legendary horror director, Lucio Fulci. Those familiar with HOUSE OF WAX will definitely find similarities in THE WAX MASK, right down to actor Robert Hossein, who, with his pencil-thin mustache, bears a striking resemblance to Vincent Price. Despite the similarities to HOUSE OF WAX, produced by Warner Bros., Argento and Fulci decided to lean on Gaston Leroux’s short story “The Waxwork Museum” to offset any legal claims made by the studio. Somehow this worked, even though THE WAX MASK is clearly borrowing many elements from Price’s most infamous feature, but if Italian filmmakers know how to do one thing, it’s skirt trademark infringement.

Though THE WAX MASK bears the presence of several Italian heavy hitters, and though it’s both set in and shot in Rome, the most frustrating aspect of THE WAX MASK is how un-European it feels. If you’re well versed in Italian films, you’ve come to expect them to feel a certain way: gaudy, opulent, and very stylistic. THE WAX MASK is none of these. Directed by special-effects artist Sergio Stivaletti after Fulci, who was originally going to direct, died in 1996,THE WAX MASK feels less like an Italian horror production and more like something that would’ve been produced by Charles Band and his cheap mini-studio Full Moon. Subsisting almost entirely on close-ups, the scope of the flick feels stunted from the start, and though there is admirable costume and production design, one can’t help but walk away after having watched the production and thinking you’ve just watched something made for television or the direct-to-video market. Also missing, considering the personnel involved? Fun and gory set pieces. That’s not to say that THE WAX MASK is a chaste production, because it’s not. There’s plenty of flesh to stoke your fires along with some flying limbs, but when it comes to the latter, especially given the film’s concept, it doesn’t feel like nearly enough, which is odd, given director Stivaletti’s special effects background. The visual effects, though scarcely employed, are dreadful. However, the final twenty minutes are so ludicrously stupid that they more than make up for the previous plodding two acts.

Severin Films brings THE WAX MASK to Blu-ray in a new 4K restoration, or so says the packaging, but I’m not so sure. The picture presentation offers a clean and stable image mostly free of speckling and print damage, though some is present. However, some sharpening looks to have been applied to the transfer, giving everything, especially the performers, an artificial, somewhat waxy (appropriate!) look. I don’t think it looks dreadful, but it doesn’t match with the claims of this being a new 4K restoration. Additionally, I’ve seen some complaints about the picture being blown-out and bright, but I didn’t notice anything distracting, though my home theater setup leans on the darker side, so perhaps that’s why. The audio is fine but nothing impressive, getting most of its mileage from Maurizio Abeni’s cheap-sounding but dreamlike musical score. The default language presentation is English dubbed, and is as goofy as you assume, but two options for the Italian audio track are also included.

A ridiculous amount of features, both newly produced and vintage, are included. The most interesting among them is “Beyond Fulci,” which provides interviews with major players from THE WAX MASK’s production, including Argento. The rivalry between Argento and Fulci was the stuff of Italian moviemaking gossip for years: Fulci had accused the younger filmmaker, when he first started out, as emphasizing style over substance, while Argento later accused Fulci of ripping off his own style in order to keep with the times (which he kinda did). However, Argento, seeing Fulci in failing health, offered to collaborate with him on a project to help him out financially, which is how THE WAX MASK came to be. Sadly, Fulci wouldn’t live to direct.

Italian horror consistently remains a watermark for many horror fans, who point to various aspects as the selling point for them, whether it’s the fluid style, the lurid content, or something less definable. As a film, THE WAX MASK didn’t work for me, but Severin’s presentation of the title is excellent, with enough supplements to keep fans busy for days. THE WAX MASK certainly boasts some heavy Italian personnel, with Argento, Fulci, and producer Giuseppe Columbo coming together for one project, but it’s a shame that this Italian production doesn’t feel very Italian.