Slaylist is a spooky playlist of 13 songs chosen by one of our contributors to get people in the proper mood as Halloween approaches. The Spotify playlist can be found at the end of the post if you wish to add it to your daily aural rotation.

When I was first offered the opportunity to curate my own special spooky Halloween playlist, I thought it would be an easy task. It wasn’t. Do you give a doom & gloom vibe throughout? Do you make it like a Barney Stinson playlist and make it all highs and no lows? Or do you travel off the beaten path and create your own musical roadmap? I went for the latter. Then, I had to whittle it down to thirteen tracks, and that was even harder. I needed to set a mood, one that either served to chill spines, or get your heart pumping through the sheer joy of catchy pop/punk/rock tunes. It’s a delicate balance. I also didn’t want to just play the greatest hits from your typical scary playlist—so there’s no “Monster Mash,” “HALLOWEEN Theme,” “Tubular Bells,” etc.  So, take a journey with me, and suss out the commonalities and ebb and flow laying within my Spookshow Halloween Playlist 2019.

I. “Theme from The Fog” – John Carpenter (from THE FOG)

When starting off a spooky playlist, you want to immediately strike an ominous mood, and there’s no better track than the opening notes of the “Theme from The Fog,” immediately allowing us to sink our teeth into the waterlogged pirate revenge tale. It’s blood-freezing, spine-chilling music that the beloved Master of Horror John Carpenter composed for perhaps his most frightening film, THE FOG. There’s no better way to get anyone in the Halloween mood than the score to a ghost story.

“But it is told by the fishermen and their fathers and grandfathers that when the fog returns to Antonio Bay, the men at the bottom of the sea out in the water by Spivey Point will rise up and search for the campfire that led them to their dark icy death.”

II. “Old Souls” – Jessica Harper (from PHANTOM OF THE PARADISE)

Stay with me as we journey on the path of eerie, evocative tunes with the Paul Williams-penned “Old Souls.” It’s a poignant lyrical dance about love and a ghost story in its own right—this one about two lovers caught in the crossfire of their hearts eternally beating in syncopated rhythm; complete with stirring, haunting vocals by the stunning and immensely talented Jessica Harper. The piece seemingly doesn’t fit in the frenzied pop/rock world of PHANTOM OF THE PARADISE, and yet its bones and harmonies are right at home in the aria-filled landscape of older musicals like PHANTOM OF THE OPERA, again proving the immense genius of Paul Williams.

Now we’re going to start things cooking with the score that complements the ghost story montage that jumpstarts Jason Voorhees’ unlucky day. “What Boy, Ma’am/Main Titles” takes its title from the foreboding words of the cop who rescued the first film’s heroine from drowning. At once things are gloomy and then with the frenzy of one of Mr. Voorhees’ kills, the music explodes forth with a panic attack of strings and horns…until it goes quiet again. And it happens again and again and again, until the opening credits hit and we’re in a full blown orchestral quarrel, the audience front and center for a musical breakdown that’ll frighten your pants off until the director’s title hits the screen and the movie really begins. 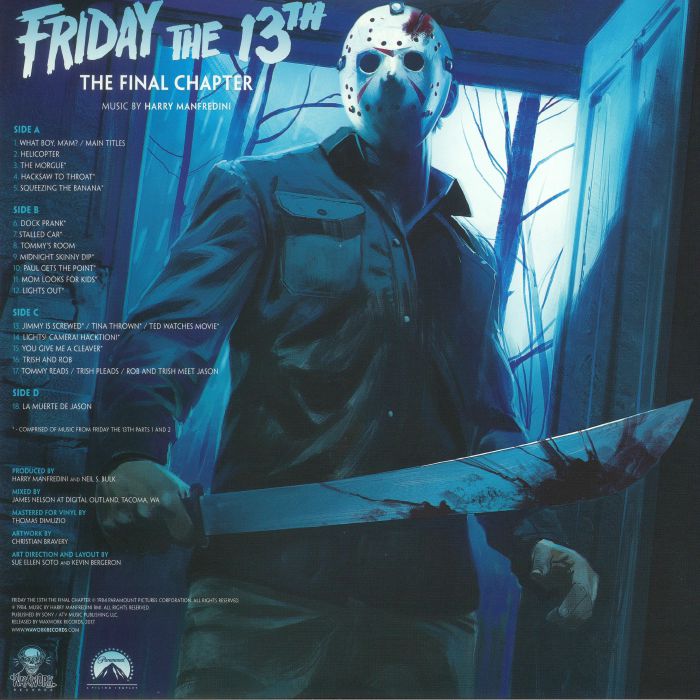 Let’s start the playlist’s segue into the fun, lively tracks, by pairing it nicely with Manfredini’s oft-repeated composition for the FRIDAY franchise. In the wake of FRIDAY THE 13TH, every studio was prepping their own teenage slaughterfests where a hulking killer was picking off forest bound flighty youths while wearing a dime-store knock-off hockey mask: see the VHS box art of SLEEPAWAY CAMP II: UNHAPPY CAMPERS, or the movie within the movie for THE BLOB (1988), which nails the aesthetic on display in FRIDAY THE 13TH PART VI: JASON LIVES. Naturally then, it makes sense that the world’s greatest parody artist would deliver his own take on the body count sub-genre, “Nature Trail to Hell,”a thunder crackling fun time about a group of boy scouts who fall victim to a bloodthirsty killer in the woods, complete with three-dimensional terror and the lurid promise of a sequel!

V. “Dead or Alive” – OingoBoingo (from Good For Your Soul)

Why don’t we continue the trend where the song’s lone designation is to get your pulse racing as you dance with your perceived devil? Here we have “Dead or Alive,” a track I’ve written about before but bears repeating as it’s quite the propulsive tune. Never has one band made death seem so lively, whether it be here or in their massive mainstream hit, “Dead Man’s Party” (which I didn’t include here because it’s an overplayed Halloween song). Its inclusion here is pure maliciousness because as you listen and get pulled in by its intoxicating beat, you become fully aware that Danny Elfman and Oingo Boingo are coating your brain with the most potent coat of nightmare fuel that could immolate your mind with the worst bad dreams possible.

The thread that ties “Pet Sematary” to the last song is of course, zombies! Though credit goes to The Ramones, who managed to turn a dark, depressing “Monkey’s Paw”-esque tale into one of the catchiest, boppiest tunes to come out of the New York punks’ catalogue. The titular track, written at the behest of Pet Sematary author (and die hard Ramones fan) Stephen King, briefly touches on Mary Lambert’s film adaptation’s plot (main zombie Victor Pascow gets a mention here and there) but really the song’s purpose is to give you a chorus so memorable that you could chew on it for days, like the masticated flesh from an old Maine drunk’s throat.

We’re descending into the latter half of my seasonal Slaylist, so it’s fitting that we include the first composed music we hear in a film about a man plummeting into an inescapable madness. Wendy Carlos’ magnificent synthesized score for the opening moments of THE SHINING, giving us a tie to the previous King title in this macabre mixtape. Though there is some bone rattling music in Stanley Kubrick’s frozen masterpiece, nothing terrifies me more than an ominous overhead view of a family driving towards their inevitable, destructive end. 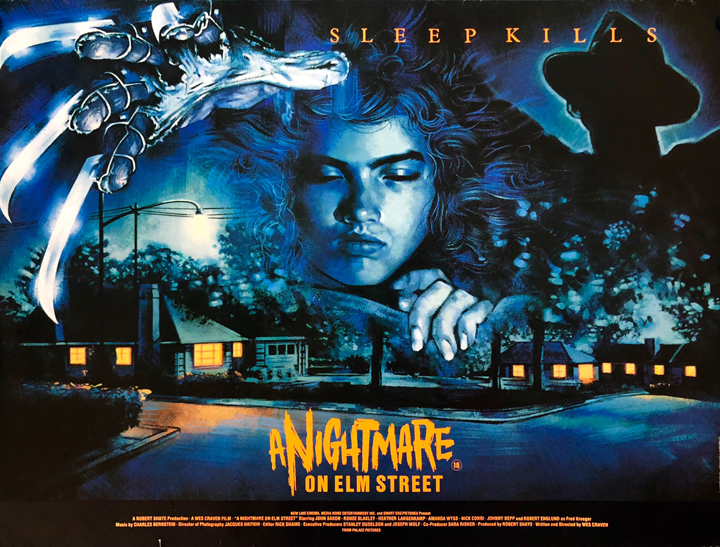 Charles Bernstein’s score for A NIGHTMARE ON ELM STREET is one of the most iconic horror themes in history, similar John Carpenter’s piano-driven piece for HALLOWEEN (but tragically not so much for FRIDAY THE 13TH). The specific piece from the OST for A NIGHTMARE ON ELM STREET I chose, though, is “School Horror/Stay Awake” which lands right around the time Nancy is falling asleep in high school all while being confronted with the nightmarish visage of her recently departed friend, Tina, attempting to claw her way out of the bloody body bag. Bernstein’s work perfectly blends in the surreal imagery that Craven crafts for his terrified theatregoers, giving the perception of things being off-kilter even when our eyes are telling us it’s all okay.

In keeping with Wes Craven’s superhuman ability to hit hard at the humanity and heart at the center of trauma, loss, and hurt, Marco Beltrami’s “Trouble in Woodsboro/Sidney’s Lament” serves a twofold purpose for the megahit SCREAM (hence its placement next to Bernstein’s NIGHTMARE track). First, it’s the frenzied, crunching guitar and electric mayhem highlighting just how manic this town is when two of their young people are brutally murdered. Then, “Sidney’s Lament” hammers home the haunt that festers inside the soul when we’ve lost someone we love in a manner that is horrifyingly happening again.

Dario Argento could murder characters with an artistic style and energy that was unparalleled, and Claudio Simonetti and his crew scored with that same passion and innovation, providing music to murder to OR that you could dance to in the discotheque. I find it tremendously, sickly hilarious that TENEBRE’s score is something you can get up and strut around the room to, all while someone is being hacked up by an axe and spurting blood like it were paint headed to a canvas. 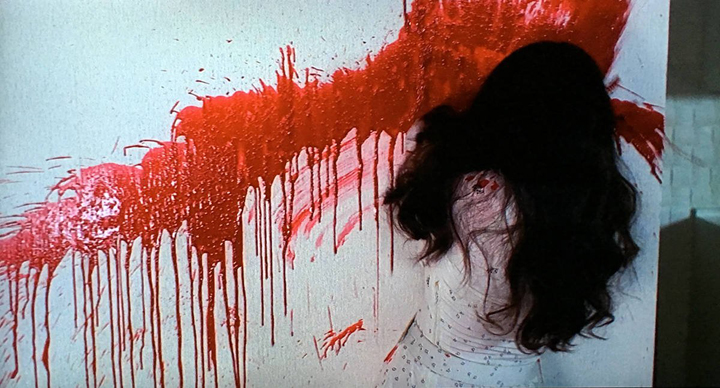 Originally this track was meant to be the end of the playlist, because it served as the button on the second worst Halloween that the Strode women have endured, until my morbid nature took over. However, I wanted it to have a close proximity to TENEBRE, because of how “Profondo Rosso” closely inspired the HALLOWEEN music composition but, like “Main Titles” before it, “Halloween Triumphant” turns Carpenters’ end credits medley into dance music. And it’s a joy from beginning to end.

All of Danny Elfman’s music is filled with eerie wonder and the strength in his orchestral wizardry is on full display in Tim Burton’s BEETLEJUICE. I initially wanted to pluck out “Lydia Discovers?” for my song choice, but it was too short, and the other track I love, “The Fly” just didn’t fit the gloom & doom vibe I was cultivating. “The Book!”  is the ghostly accompaniment for the corpsed-out couple, the Maitlands, as they find the Handbook For The Recently Deceased and the southern-twanged “Obituaries” scores our titular ghoul finding out about the new arrivals and kickstarting the plot into motion. Elfman’s sensibilities were tailor made for this movie, and it makes perfect sense that he and Burton would stick together for so long as their tastes are so aligned.

XIII. “No One Lives Forever” – Oingo Boingo (from Farewell: Live From The Universal Ampitheatre – Halloween)

To the surprise of no one, I end my Halloween playlist with Oingo Boingo, and it’s with the utmost morbid delight that I chose “No One Lives Forever.” This is specifically the Halloween 1995 live version from Farewell because the sweaty energy of Boingo’s last performance comes through your headphones and infects you with the same fire and brimstone that they conjured that night at the Universal Amphitheatre. There’s just no better way to bring a close to your Halloween party than a song about spitting in the face of shuffling off the mortal coil.