Say the name “John Hughes” to a film fan and they’ll easily think of several things: the ‘80s, teens, and love. If ever a filmmaker had been the face of a movement, it’s Hughes, whose films easily embodied the growing pains of the middle-America teenager. And that’s what makes WEIRD SCIENCE a semi-outlier in his long and prolific career. Hughes’ most well-known films, THE BREAKFAST CLUB and SIXTEEN CANDLES, were comedies at their hearts, but also contained enough emotion, substance, and relatability to register as more than just another 90-minute romp filled with teen hijinks and gentle kissing. Same goes for PRETTY IN PINK, which stops its general lightheartedness and allows for a genuinely melancholic monologue from Harry Dean Stanton about being an older and ineffective father. 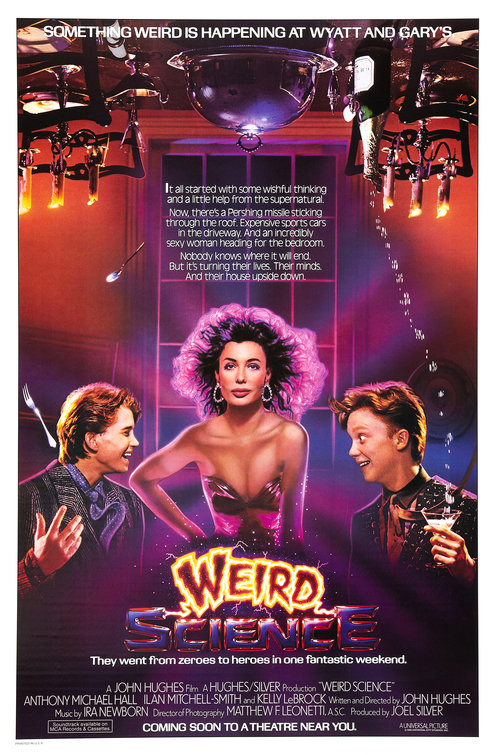 WEIRD SCIENCE is base-level John Hughes. It covers all those same components, but in the most superficial way possible. It is, essentially, Hughes’ take on the teen sex comedy, which had become prominent by then, ushered in by National Lampoon’s ANIMAL HOUSE before things like PORKY’S and THE LAST AMERICAN VIRGIN took over. Because of that, it’s probably not fair to judge WEIRD SCIENCE in the same way you would judge ST. ELMO’S FIRE, being that both flicks, despite similar genetic make-up, have different goals.

Which is what makes WEIRD SCIENCE kind of a blast, and very, very strange.

High school horndog outcasts Gary (Anthony Michael Hall) and Wyatt (Ilan Mitchell-Smith) want to get laid. Of course they do; they’re boys in high school. So, since this slice of Shermer, Illinois, exists in a land before Tinder, the obvious next step is to create a girl (using Wyatt’s computer) that will satisfy their carnal urges and teach them all the different ways of being a sexual maestro. Hughes was right to have FRANKENSTEIN playing on a background television all during this creation sequence because this is obviously a riff on that Modern Prometheus. Soon, their creation shows up – a gorgeous British bird whom they name Lisa (Kelly LeBrock), and who will go on to wreak all kinds of ‘80s havoc.

A popular term these days is “problematic.” I’m sure you’ve heard it. It gets thrown around more and more when it comes to judging art from a different era with 2019 “woke” eyes. Bender looks up Claire’s skirt in THE BREAKFAST CLUB… without asking. Problematic. One friend calls another a “total faggot,” along with the freakishly offensive Asian character of “Long Duk Dong” in SIXTEEN CANDLES. Problematic. In an op-ed for the New Yorker, Molly Ringwald opined about watching THE BREAKFAST CLUB with her modern eyes and seeing things considered problematic today. “It’s hard for me to understand how John Hughes was able to write with so much sensitivity, and also have such a glaring blind spot,” she writes. It’s a good thing she didn’t appear in WEIRD SCIENCE, because it’s basically a poster board for all the ways a comedy could never be made today. First, and often overlooked, Gary and Wyatt, who are 16 and 15, respectively, inadvertently create their own personal pedophile by choosing to make Lisa 23. Naturally, that line of thinking didn’t exist back in the ‘80s — nor did the implication sink in that because Lisa was created, and it’s made clear she is fully under the boys’ control and must adhere to their every whim, they are basically off-screen raping her throughout the movie.

Creepy sexual stuff aside, there’s also the scene where the trio goes to an after-hours blues club with a mixed-race clientele, where Gary gets so drunk that he begins mimicking the gravelly-voiced black man next to him, giving himself a “black” voice. (The movie comes to a dead halt during this sequence — not because of the “offensiveness,” but because it’s putting its full weight on one joke that never works, is generally obnoxious, and goes on for way too long.) I should note that I don’t personally find any of the above offensive because I’m an adult and I have the ability to recognize that art made during certain eras are going to reflect those eras — what was considered acceptable, what was part of the lexicon, and what, back then, was simply considered funny. Is the humor ideal? These days, no. Certain things once normal are now avoided. Should WEIRD SCIENCE ever get the remake treatment, genders will be swapped, unconsented sex will be avoided, and everyone will make sure everyone else is on the same page all the time (except for the bad guy). Sounds boring. 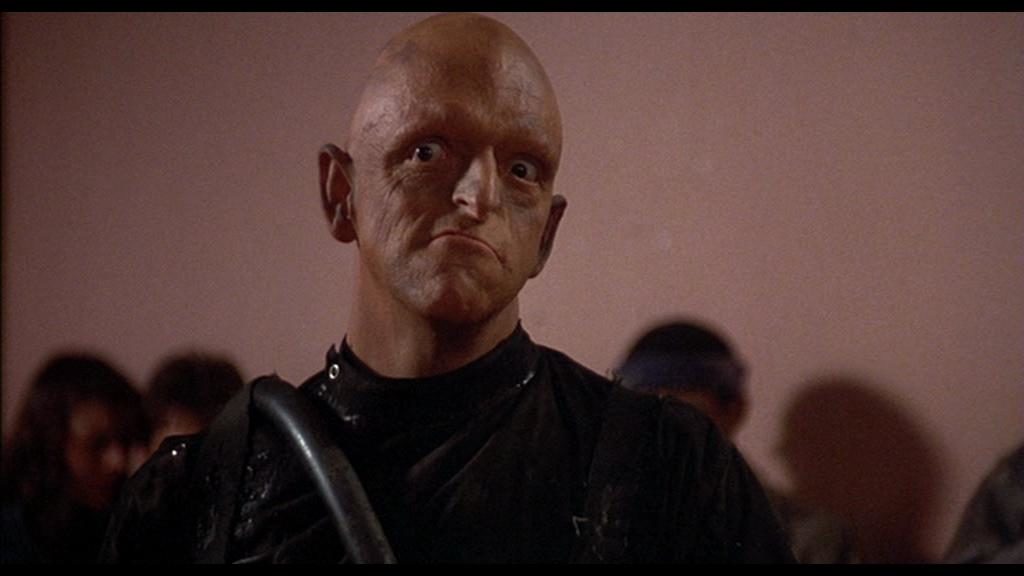 WEIRD SCIENCE is often very funny, fully coming alive during the third act where Gary and Wyatt throw a party that goes very out of control, allowing for cameos from members of the cast of THE ROAD WARRIOR (Vernon Wells) and THE HILLS HAVE EYES (Michael Berryman). The party sequence is when WEIRD SCIENCE gets the most outrageous, especially when contents of the house are sucked out the chimney and redistributed across the back yard once Gary and Wyatt attempt to create another Lisa-ish compu-girl for two bullies (Robert Downey Jr. and Robert Rusler) who spent the whole movie breaking their balls. It’s as if Hughes had spent years writing down every joke, sight gag, and concept he’d maybe want to use one day and decided that, during the third act of WEIRD SCIENCE where anything could happen, he would use it all. Frozen grandparents in the cupboard; an evil older brother, Chet (an amazing Bill Paxton), turning into some sort of monstrous cryptid; a bedroom where it snows all the time; a rocket ship fucking the inside of a house (symbolism!); motorcycle cannibals; and more. Hughes weaves them all together in a weird, excessive pastiche of chaos that helps usher WEIRD SCIENCE across the finish line, transcending from an odd but average comedy to ‘80s cult classic. (That the film is bookended by Oingo Boingo’s song of the same name helps a lot – what’s more ‘80s than Oingo Boingo?) (Don’t say cocaine.)

For a teen sex comedy, WEIRD SCIENCE contains no sex whatsoever – at least, not on screen. Despite some brief nudity (mostly in the form of the skin rags in Wyatt’s bedroom), WEIRD SCIENCE is visually chaste. The dialogue is certainly racy at times, but there’s not a single sex scene between any members of the cast, despite that being the reason for Lisa’s creation–and on top of that, there’s only one implied sex scene throughout the whole flick. If we follow the rule of “if I didn’t see it, it didn’t happen,” then Gary and Lisa never have sex at all. This would make sense in an ironic way if the flick had followed that concept for both boys — they created their own sex goddess, but never actually had sex with her—but instead, it seems Wyatt’s the only one who gets laid. It’s weird. WEIRD SCIENCE! 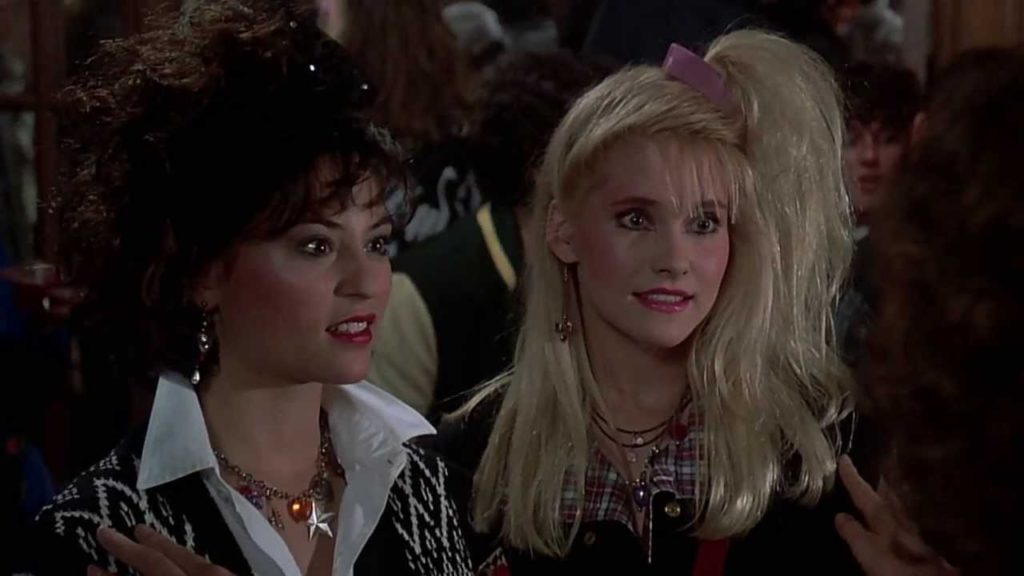 The more one thinks about WEIRD SCIENCE, the less sense it all makes, so maybe we shouldn’t, but come on: Gary and Wyatt are dicks. They do awful things, learn zero lessons, and still get the girls (Suzanne Snyder, my ‘80s crush I’m still sweet on, and Judie Aronson), who they both profess to love within 24 hours of interacting with them. And how do they “get” the girls? By shooing away some mutant bikers. Sure, saved lives can make a solid case for new infatuation, but this development follows on the tail end of them having agreed to create another Lisa for those earlier mentioned bullies in exchange for their girlfriends. Later, when Wyatt drops off Hilly at her house, and she tells him she’ll probably be grounded for a month, Wyatt says that he’ll wait for her…before grabbing her ass with both hands, and with his fingers crossed. What the fuck, what does that mean? He’s not going to wait for her? Did he learn nothing? God, fuck you, Wyatt! THAT’S JUDIE ARONSON. DON’T YOU DARE DISRESPECT HER — SHE WAS IN AMERICA NINJA.

And what about Lisa? How does a person begin coming to grips with the existential realization that she’s been created out of thin air solely to be used as a sex toy? And does that make it weird for her once the sex stuff falls by the wayside and she starts mommying the boys with a whole bunch of life lessons instead? How does she get that gym teacher job at the end if she doesn’t have a birth certificate or social security card? Does she have DNA? Can she procreate? Do she and the boys all stay friends? Would it be weird if they did, or weird if they didn’t? Perhaps Gary and Wyatt eventually marry their girlfriends and Lisa goes to their joint wedding, and when she does, the boys whisper to their new wives, “Honey, you remember Lisa: the fuck slave we created with Wyatt’s Macintosh.”

Universal had previously issued all of Hughes’ films on Blu-ray, some of which Arrow Video is rereleasing to typically great results. WEIRD SCIENCE is presented in an all-new 4K transfer, and though it’s not the kind of flick that really benefits from such loving care, the picture is still very attractive. The audio presentation, too, is clean and clear, and its ‘80s soundtrack sounds full and very fun.

I’ll go ahead and be that cynical prick who wonders why Anthony Michael Hall or Kelly LeBrock didn’t provide a new interview for this release, being that it’s not like they’re super-busy these days, and it’s a shame that Arrow couldn’t have assembled an updated retrospective on the film’s making. (The one previously produced by Universal is present, though it’s somewhat brief and already very outdated). Sadly, with Hughes and Bill Paxton no longer with us, and with Ilan Mitchell-Smith having left the industry, the lack of input from major players is understandable, but still, the new batch of supplements feels a little light. (Hughes was something of a hermit and would’ve likely declined involvement, anyway.)

The special features are as follows:

It’s pretty simple: if you’re a fan of WEIRD SCIENCE, this new edition from Arrow is an easy recommendation. The PQ and AQ are definitely an improvement over Universal’s previous release, and it contains all the previously produced supplements (minus the pilot episode for the television series) along with some new ones. (And for you purists, the original poster art appears on the reverse side of the artwork insert.) Definitely grab yourself a copy before Woke Squad 2019 finds out this movie exists and seizes every copy for a ceremonial scrubbing from history. (Insert bawdy Chet laugh here.)

Weird Science is now on Blu-ray from Arrow Video.