More often than not, Quentin Tarantino likes to deliver a happy ending. Butch and Jules are redeemed in PULP FICTION, Jackie Brown gets away with the money, and revenge is served up deliciously cold by The Bride in KILL BILL. In the 21st century, Tarantino has also attempted to offer up a happy ending to the darkest periods of American history through the power of film: He violently killed Adolf Hitler in INGLORIOUS BASTERDS and turned a slave into an American folk hero in DJANGO UNCHAINED, providing a catharsis for events the world is still feeling the effects of today. With ONCE UPON A TIME…IN HOLLYWOOD, the writer-director once again crafts a tale that attempts to put right what once went wrong, offering an alternate ending to the 1960s while offering a snapshot of imperfect people in an imperfect, but ultracool world.

Rick Dalton (Leonardo DiCaprio) is a has-been. Once a popular T.V. cowboy, the actor now finds himself borderline washed up, guest-starring on one-hour television dramas as the heavy literally getting beat up by younger, more popular co-stars. His best friend is Cliff Booth (Brad Pitt), his stunt double, who has fallen on hard times himself; blacklisted from stunt work, Cliff now finds himself working as Dalton’s gofer, carting him around to auditions and playing handyman around Rick’s Hollywood Hills bachelor pad while he spends his nights in a trailer in the parking lot of the Van Nuys drive-in. Dalton and Booth are relics of a bygone era, older white men who are starting to feel out of place in a changing world. (Mad Men dealt with a similar theme as Roger Sterling asked Don Draper, “when is everything going to get back to normal?” when faced with the late ‘60s.) The two men are on their way out, and the hipper New Hollywood, represented by Rick’s next-door neighbor Sharon Tate (Margot Robbie), is on its way in. 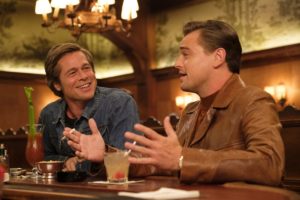 Tarantino’s oeuvre has always been personal—even as a gun for hire on FROM DUSK ‘TILL DAWN—as his whole life it would appear has been about pop culture, particularly film. And ONCE UPON A TIME finds the director looking both inward and outward, at himself and at the ever-changing Hollywood landscape. Yes, in the film it’s 1969, but it might as well be 2019; young filmmakers are coming up and changing not only Hollywood but the world. And Tarantino is scared of becoming irrelevant himself. Rick Dalton may be the closest Tarantino has come to putting himself on-screen since Clarence Worley in 1993’s TRUE ROMANCE; this time, however, he’s more than just a pop-culture enthusiast, but a big-time director facing down changing tastes of an era of popular culture he helped usher in.

The film doesn’t offer up an easy answer as to the decline of Cliff and Rick’s careers, which are intrinsically tied together. Yes, the times are a-changin’, but the two men also engage in self-sabotage around every corner, either due to drinking or fisticuffs onset. They’re privileged guys who think they can do whatever they want and not have to face the consequences: they’re in the movies, after all. It’s not unlike the Hollywood that Tarantino has been part of for over two decades, and helped shape with the success of PULP FICTION in 1994. Tarantino wryly points to this in a sequence where a young actor (who prefers not to be called an actress) explains how she perfects her craft to a half-drunk Rick on set. Perhaps Dalton’s career isn’t on the way out because of changing times, but because he stopped taking the job seriously, leaving room for a new breed to come in and take over.

The film is told from the point of view of Rick and Cliff, with third lead Sharon Tate (Margot Robbie) less of a character than a representation, a vision of innocence that was taken away on that fateful August night in 1969. Robbie doesn’t say a lot in the film, but she doesn’t need to. This isn’t the Sharon Tate story, this is the story of Hollywood in the ‘60s, and Robbie commands every scene she’s in clad in a mini-skirt and go-go boots. 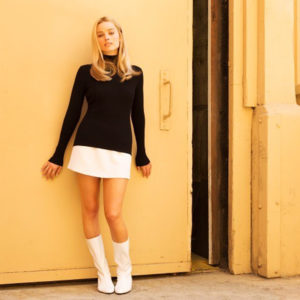 After a series of period pieces which found the director in the American west and 1940s Germany, it’s a treat to see Tarantino cast his visual eye upon a more recent America. His attention to authenticity and detail puts the audience smack dab in the middle of Los Angeles in the ‘60s, from the costuming to the production design, on which no expense was spared: the neon of a Hollywood night reflecting in Rick’s Coupe De Ville, the interior of classic eatery Musso & Frank’s, Rick’s stylish bachelor pad, and of course the Cinerama Dome. Tarantino lulls you into his vision of 1969, never lingering on any set too long….not even the vintage Taco Bell. It harkens back to something George Lucas said about the making of the STAR WARS films:

“One of the fatal mistakes that almost every science fiction film makes is that they spend so much time on the settings—creating the environment—that they spend film time on it. And you don’t have to spend so much film time to create an environment. What they’re doing is showing off the amount of work that they generated and it slows the pace of the film down. The story is not the settings, the story is the story.”

Tarantino is known as a filmmaker that deals in crime and violence, but it’s his love for pop culture that propels his works, not the nihilistic cynicism of some of his pulp-influenced counterparts. Tarantino’s ‘60s is punctuated by a soundtrack of hits from the era, featuring Paul Revere & The Raiders, Vanilla Fudge, and Neil Diamond; the tunes at times seem obvious, but with a year as iconic as 1969, it’s hard to play anything out of left field. But Tarantino does toss in a few surprises, like “Ramblin’ Gamblin Man” by The Bob Seger System and Jose Feliciano’s take on “California Dreamin’”. Tarantino has never been a gatekeeper, assuming that his audience won’t “get” his references; instead, he just assumes everyone is into the same stuff he is, and that filmgoers will revel in every little detail of the worlds that he shares. 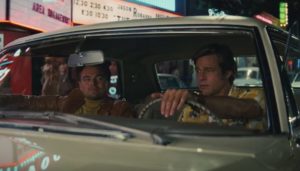 The biggest flaw in ONCE UPON A TIME…IN HOLLYWOOD is that Tarantino created a world so compelling and characters so interesting that, even at almost three hours long, there’s not enough time spent with them. ONCE UPON A TIME is a hangout film, but it’s the audience that gets to hang out with the characters, not the characters with each other. That’s slightly disappointing, considering the film features Brad Pitt and Leonardo DiCaprio exchanging dialogue on screen together for the first time. The audience wants to see these two characters together, spouting that snappy dialogue that Tarantino’s scripts have been known forever since a table full of jewel thieves discussed whether to tip or not to tip. The film also makes an odd choice by glossing over Dalton’s resurgence has a spaghetti western superstar in the vein of  Clint Eastwood when he makes the move to Italy; the film weaves and winds, arguably never really sure where it’s going until its final moments.

When the climax comes, it’s just as outrageous, hyper-violent, silly, funny, terrifying, and cathartic as an audience could ever want from a Tarantino picture. And as the denouement kicks in and the film begins to wind down, you sit and look back on the journey the filmmaker has brought you on. ONCE UPON A TIME…IN HOLLYWOOD gives you a sense of wistfulness, hope, as well as joy—for life, for movies, and for friendship. Once again, through the power of film, Tarantino delivers a happy ending to a cynical, violent real world.