As I sat down to watch Penny Lane’s HAIL SATAN?, I knew the doc would be covering many different things about this black goat religion, but I was hoping to hear concrete answers to the very pointed question, “Do Satanists actually believe in Satan?” Even before that question is asked, which occurs roughly one-third into the doc, everything that Lane presents up to that point, which includes interview segments with Lucien Greaves, the current leader of the Satanic Temple, would lead you to predict the answer: no.

Obviously, the next question comes, “If you don’t believe in Satan, why call yourself Satanists?” That answer, this time, is less predictable, and it’s one that sums up HAIL SATAN? as a whole: Satanism is a direct response to the United States’ gradual transformation into a “Christian country,” despite having originally been founded as a secular nation, and that Satanism is basically the underdog religion using shocking imagery and their own very misunderstood philosophies to shock society into awareness and attempt to teach what they’re really about. Satanism is rebelling against the Church’s butting in of everyday Americans’ lives in the form of limiting women’s access to abortion, or restricting gay rights, or taking the moral high ground and defaming the Satanic Temple as a whole, even though the Diocese of Boston was responsible for the cover-up of thousands of boys being molested by priests over the last several decades — something, the Temple is quick to point out, is far more evil and disgusting than what the Temple is said to take part in.

The third question to come: “If Satanists don’t believe in God, why don’t they just call themselves atheists?” Because non-believers lack a community, one Satanic Temple member puts it: that atheists embrace nothing, and have no philosophy; the same cannot be said for the Satanic Temple, who very much have codes of beliefs (in the form of their own seven Tenets). One of those Tenets? Word for word: Beliefs should conform to one’s best scientific understanding of the world. One should take care never to distort scientific facts to fit one’s beliefs. Tell me that’s not fucking relevant with respect to the current anti-science administration currently occupying the White House–that the entire world is melting, the temperatures are increasing yearly, that people are embracing ludicrous conspiracy theories about vaccinations and climate change while gleefully turning up their noses at the facts and science anyway. Also tell me that particular Tenet makes less sense than the Commandment that forbids a person from being envious because their neighbor has a maid. 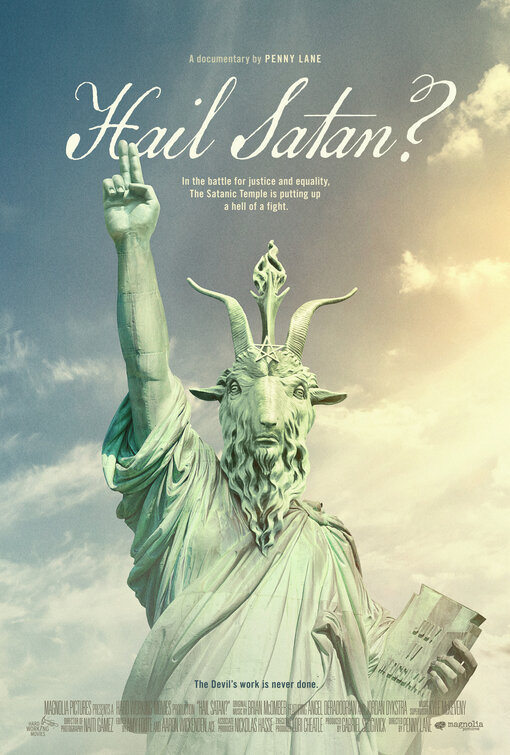 I’ll admit I’ve been intrigued by this movement for a while now: not because I’m a devil worshiper, but because by doing some simple Googling — something anyone is able to do — I was really taken aback by the things I’d discovered, embodying the simplicity of what the Satanic Temple, preceded by Anton LaVey’s Church of Satan, aims to do. (LaVey’s Church forbade its followers from killing animals unless for purposes of food and shelter. Sound evil to you?) Modern Satanic Temple members do not sacrifice animals, or take part in orgies, or perform black magic or occult incantations. No, instead, they adopt sections of Arizona highways and pledge to keep them clean — same with beaches, in fact. They run shoe and feminine hygiene drives to benefit the homeless. They form after-school programs to give children a place to go that’s safe, where they can color with other children and expose themselves to new ideas. Satanists are men and women, white and black, hetero and homosexual, former Christians, atheists, and Muslims. One of them in particular, a native of Arkansas who calls himself a former Christian, and who looks and sounds every bit like 30 ROCK’s Jack McBrayer, wears a respectful blue suit complete with blue bowtie.  But this isn’t a put-on: this is what members of the Satanic Temple can look like. The Temple is also comprised of people, though their external appearances may suggest they follow the public’s misconceptions of the Satanic Temple, who are not evil, who are not crazy, and who don’t have hate in their heart. They are people rebelling against the corruption of government and the Church, and who are advocating for the clear separation of both, upon which our country was once founded, but has since fallen by the wayside — after one political party in particular realized it would benefit them at the polls. In fact, the doc is sure to include one prominent member being ex-communicated due to her extremist performances that called for the assassination of Donald Trump. While this is easy for the armchair devout to point at and say, “See? They’re evil!!,” really, what the doc is showing you is that this viewpoint goes entirely against the belief system of the Satanic Temple, and that they did the responsible thing by severing ties. They are, one could argue, remaining more true to their responsibilities to morality than the Catholic Church.

The backbone of the doc is the story that has become quite well known to every-day society through its heavy coverage in the media: the Temple’s insistence that the Arkansas State Capitol either remove its Ten Commandments monument in order to honor the Constitution’s proclamation that religion and government never intertwine, or make room for their own Baphomet statue, which they argue belongs there just as much. Naysayers call this nothing more than a form of trolling, and certain members wouldn’t disagree, but they also know that what looks like theatrics represents something much larger, and it’s their way of breaking through to the everyday American to educate them on what the Satanic Temple is really about.

HAIL SATAN? is the most fascinating documentary I’ve seen all year and I would recommend it to anyone the least bit open minded. I like to think you will be constantly surprised, amused, and even touched by certain aspects of both the documentary and the religion itself. I would almost guarantee that you won’t be expecting nearly any of what you see.

HAIL SATAN? is now on DVD from Magnolia Pictures.