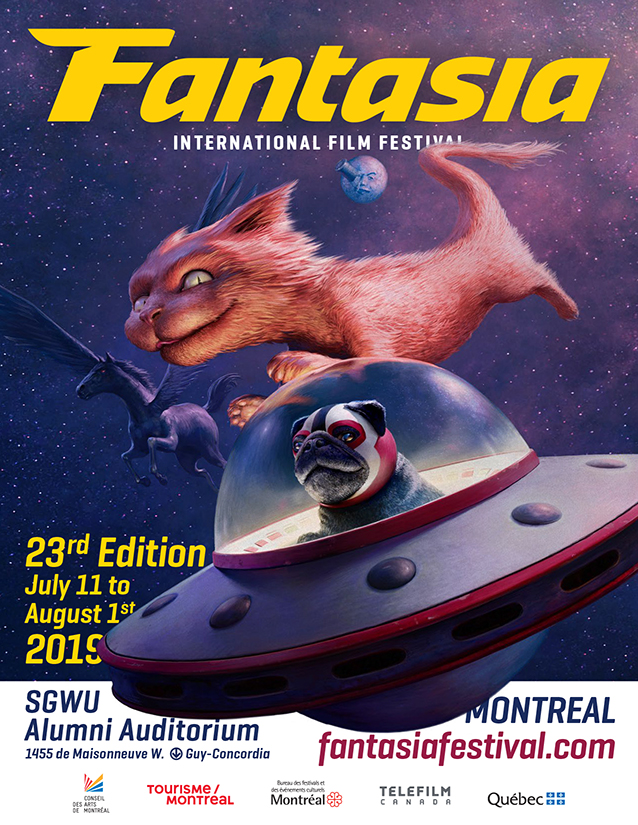 2019 marks the 23rd edition of Montreal’s Fantasia International Film Festival, which has become one of the most prominent genre film festivals in the world over those twenty-plus years. Boasting 130+ films screening over the course of three weeks, Fantasia is the largest genre fest in North America and plays host to premieres of films from around the globe. In addition to dozens of new films, this year’s festival includes repertory screenings from Vinegar Syndrome and Severin Films as well as a special tribute to Ted Kotcheff (director of FIRST BLOOD) and Joe Bob Briggs presenting his comprehensive history of hicksploitation cinema HOW REDNECKS SAVED HOLLYWOOD among many other events. 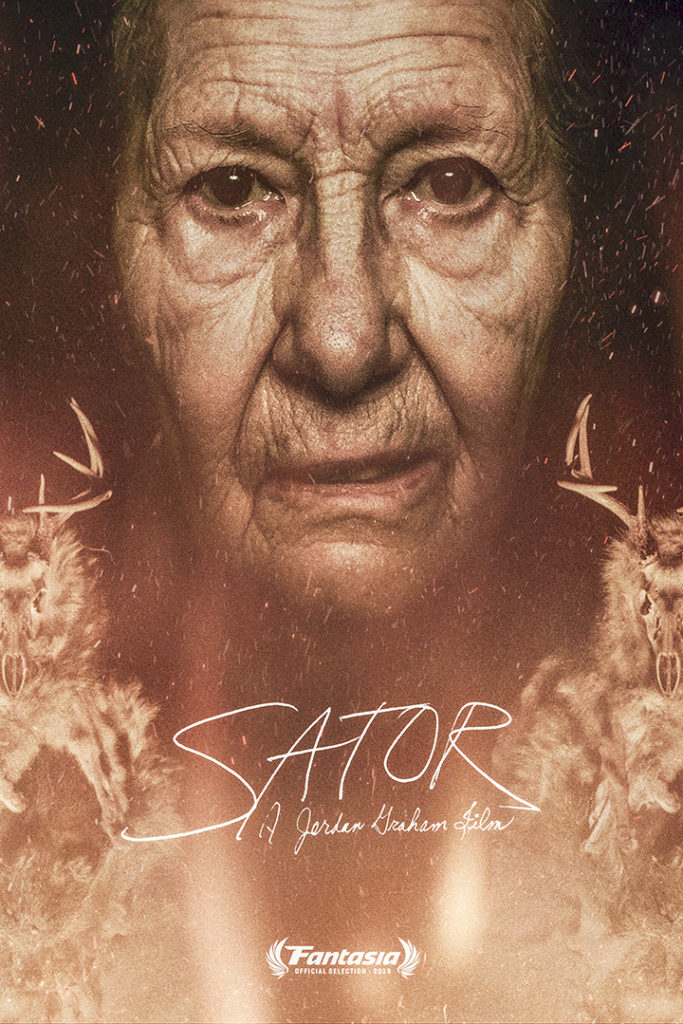 Adam (Gabe Nicholson) lives with his dog in a remote cabin surrounded by dense forest. His life is almost entirely solitary and silent, but something in the woods threatens Adam’s peace of mind. When other people finally enter the scene, the picture starts to become clear: Pete (Michael Daniel), Adam’s brother, pops in for a visit to check on him. Pete and their sister Evie (Rachel Johnson) take care of their grandmother Nani (June Peterson), currently in the grips of dementia. But Nani has had strange interactions with a being called Sator for many years, and it’s unclear whether this is a genuine supernatural phenomena or a manifestation of the same mental illness that has compelled Adam to banish himself to the woods. As unsettling events befall Adam and Nani’s condition deteriorates, the family may learn too late just what Sator really is. SATOR is a low-key slow burn that was clearly a deeply personal project for writer/director Jordan Graham, integrating VHS home videos as a flashback device in ways that make it unclear whether some of them are genuine and which were created for the film. It’s very unnerving, with some simple but effective imagery and a dark atmosphere that is unshakeable. If there’s a major complaint to be made here, it’s that so much of the film is too dark–not in its subject matter, although that’s plenty bleak as well, but in its actual physical lighting. But Graham puts that darkness to good use, providing a clear metaphor for its characters’ mental and emotional states. It’s a spellbinding film that takes a microscope to uncomfortable questions about family and what is passed down from our parents; many viewers will no doubt be curious to learn more about the film’s production, which seems likely to be an equally fascinating (and possibly disturbing) tale. 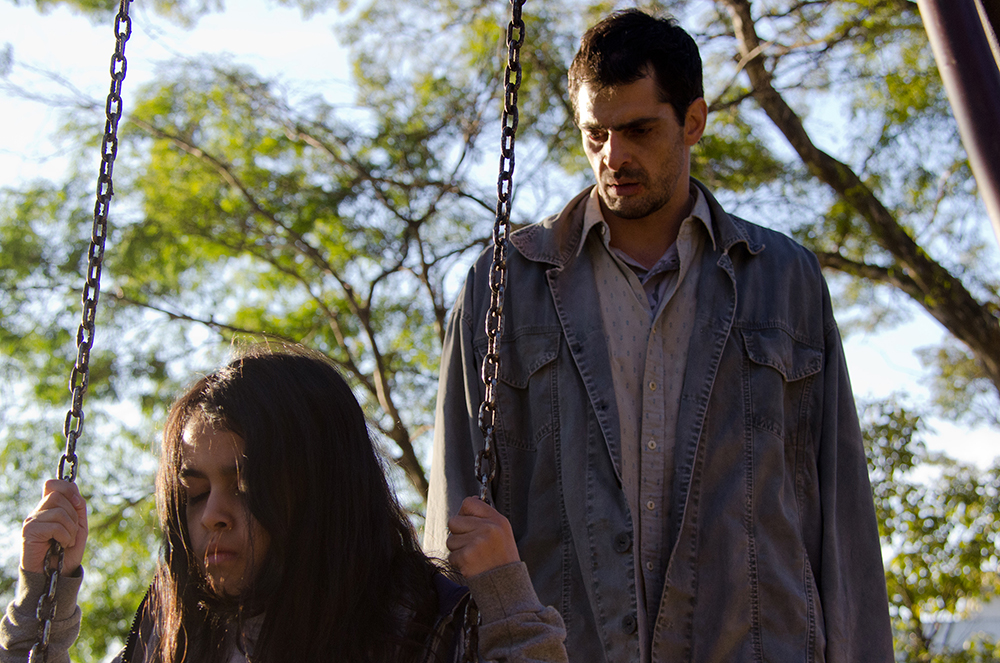 Dalva (Nina Medeiros) is a little girl living with her depressed construction worker father Jorge (Julio Machado) and her aunt Cristina (Luciana Paes). When Cristina gets married, Dalva frequently has to fend for herself while Jorge barely manages to get through each day. Dalva begins to think she has supernatural abilities, although this may mostly stem from the fact that she watches NIGHT OF THE LIVING DEAD and PET SEMATARY over and over again. As tragedy strikes at Jorge’s job and he is injured, inexplicable things begin to happen and Cristina encourages Dalva’s superstitions. But if Dalva’s abilities are real, they may present more of a threat than a blessing to this damaged family. THE FATHER’S SHADOW is Gabriela Amaral’s follow-up to her intriguing debut feaure FRIENDLY BEAST. That film took the basic setup of a “home invasion” film and twisted it into a brutal class warfare allegory, while here she borrows from haunted house, witch, and zombie stories to build a poignant portrait of a family on the brink of disaster. Nina Medeiros gives a fantastic lead performance, and Amaral has a knack for quietly haunting imagery that lends THE FATHER’S SHADOW an emotional weight few genre films could shoulder. If her first two films are any indication, horror fans will want to keep an eye out for whatever Amaral does next. 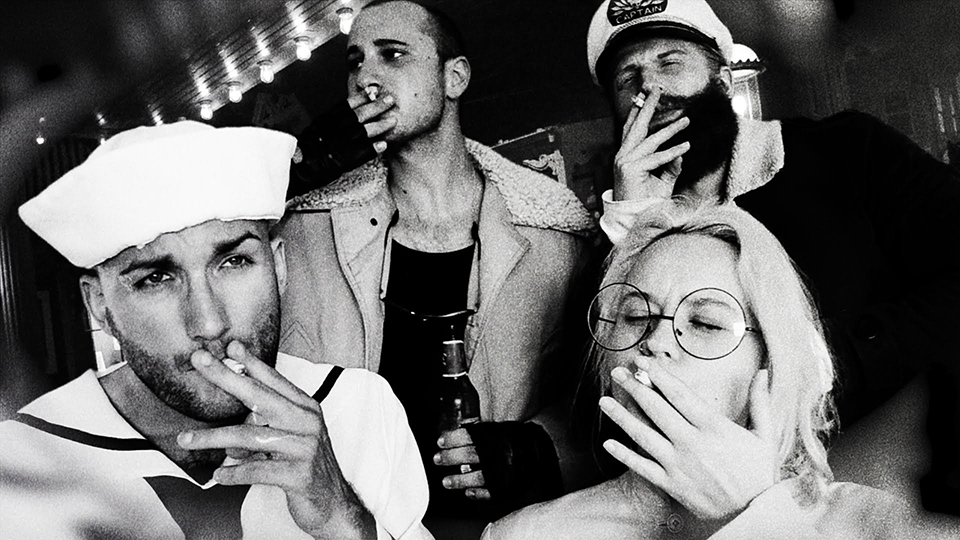 After the death of his father at the hands of a monster lurking in Lake Michigan, Captain Seafield (writer/director Ryland Brickson Cole Tews) hires a crew of specialists to help hunt the beast and take revenge. The attempts to find and kill the monster don’t go very well, though, and soon the cracks in Seafield’s facade begin to show. If Seafield isn’t actually a boat captain?—?and it becomes clear very early on that this is the case — who is he, and what actually happened to his father? LAKE MICHIGAN MONSTER is an aggressively wacky comedy mostly distinguished by its visual style. Tews all but dares viewers not to think about Guy Maddin: The entire film is given a black & white, heavily grainy faux-film look that stands at odds with its constant stream of goofery. There are some laughs, as there would be in any movie with a Zucker/Abrams/Zucker approach to quantity over quality of gags, but even clocking in under 80 minutes this gets exhausting. Tews wisely keeps the most interesting visuals for the finale and even manages an inspired and artful ending, but it’s impossible to become emotionally invested when literally everything is a joke.

Some time after an apocalyptic event, a father and daughter wander a surreal landscape in an attempt to survive the remnants of society and the bureaucracy that still inexplicably remains active. Or something along those lines — NIGHT GOD defies any real narrative sense, instead crawling alongside its protagonists through a gorgeously designed and photographed nightmare world. Thankfully there are some moments of absurd humor, but for the most part this is extremely bleak stuff. Whatever is left of humanity is still defined by our worst instincts: factions warring openly in the streets, impossible requirements for performing the simplest of official tasks, and snuff TV game shows all mark a futile passage of time waiting for the final end. Even more than Jennifer Reeder’s KNIVES AND SKIN (also playing Fantasia this year), NIGHT GOD frequently feels less like a narrative film and more like a video installation that would be more at home screening on a loop in a museum than anywhere else. As with that film, this is not a complaint: this is an endlessly fascinating exercise in photography, design, and mood that requires a generous attention span. It’s not a good time by any means, but NIGHT GOD is a perplexing work of art that begs careful consideration.

Koji Wakamatsu (Arata Iura) was a major counterculture filmmaker in Japan, and most of his contemporaries and crew were like-minded men. In 1969 Megumi (Mugi Kadowaki) talks her musician friend into getting her an in with Wakamatsu, and before she knows it she’s on set with a promise to direct her own feature if she can stick it out long enough in the trenches. That’s no easy task, and as Megumi weathers Wakamatsu’s tyrannical persona in production and hard-drinking personal life, she watches other hopefuls fall away. Her tenacity pays off in experience and in allowing her to meet other luminaries working in “pink” films like Nagisa Oshima (Sôsuke Takaoka), but Megumi feels increasingly isolated and overlooked as Wakamatsu continues to enlist more men to fill out his filmmaking posse. DARE TO STOP US doesn’t shy away from depicting Wakamatsu as difficult and borderline abusive, and it’s also shockingly forthright in illustrating his political hypocrisies. Looking back 50 years later throws Wakamatsu and some of his contemporaries’ lives and work in  a new light, and true to the filmmaker’s idiosyncratic vision this film was actually produced by the same studio whose early years it depicts: Wakamatsu Productions. Mugi Kadowaki is excellent as Megumi, and the film’s sometimes rough guerrilla style speaks to the same immediate approach used by filmmakers in the era in which the action takes place. Director Kazuya Shiraishi also does an excellent job replicating the look of some of the actual films produced in the years during which the film takes place, seamlessly bouncing viewers behind the scenes and onto the other side of the screen. In choosing to spotlight a sadly overlooked member of Wakamatsu Productions’s history, DARE TO STOP US goes beyond the standard biopic and presents an unflinching look at a time and place that would be easy to romanticize.