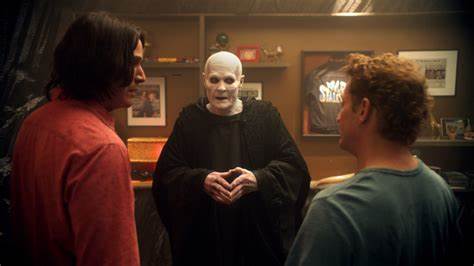 The concept of a “Bill and Ted 3” has been, at the very least, a discussion around Hollywood meeting tables for almost the last twenty years. Considered one of those long-mooted sequels that didn’t seem likely to ever exist, like 2017’s BLADE RUNNER 2049 and next year’s GHOSTBUSTERS: AFTERLIFE, BILL & TED FACE THE MUSIC somehow feels designed to both reflect and combat the horrifying, confusing, soul-crushing clusterfuck known as 2020. Throughout the ‘80s and ‘90s entries of Bill and Ted’s excellent adventures, the characters always exuded an idealism and sense of good that was rare for a time when movies geared toward the youth were usually tackling the pains of adolescence (FAST TIMES AT RIDGEMONT HIGH, everything John Hughes) or turning them into a generation out of touch with their emotions (HEATHERS, RIVER’S EDGE). That our beloved, never-stoned stoners seemed to lack the cerebral acuity of their fellow students, in spite of their at-times elaborate verbiage, is part of what made the characters so fun and even enviable. They weren’t hampered by the events of the real world. They weren’t concerned about their futures, even if they should’ve been. Their entire worldview was limited to San Dimas, and it was a world free of conflict. All they knew was they were friends, they had fun together, and their burgeoning two-man band, Wyld Stallyns, was going to blossom into a world-changing event.

After years of false starts, vague and optimistic updates from its leads, and a looong period of script development, BILL & TED FACE THE MUSIC arrived during a time, it would seem, when it was most needed (but which was, much to my chagrin, not called BILL & TED’S RIGHTEOUS RECON). 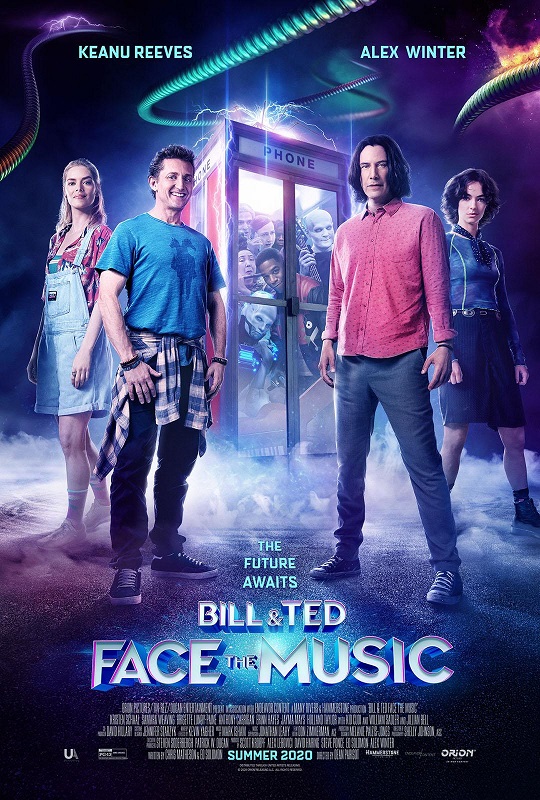 I have long said, and still believe, that while it’s possible to make a long-delayed sequel to a movie or series that manages to be a worthy new entry, it’s a much taller order to design that sequel to feel like the other movie(s) it’s following. Though the aforementioned BLADE RUNNER 2049 achieved this, many, many others did not. Hell, not even King Beard himself was able to pull this off with his own late-comer sequel to a cherished ‘80s property – the much-maligned INDIANA JONES AND THE KINGDOM OF THE CRYSTAL SKULL – which was not only terrible, but didn’t feel like it belonged to its own series whatsoever (except for that great punching sound). Somehow, in spite of everything, in defiance of our pessimism and working knowledge of Hollywood’s propensity for carelessly exploiting any brand with the least amount of street value, BILL & TED FACE THE MUSIC not only works as a movie, but successfully recaptures the magic of the series itself. Alex Winter easily steps back into the role of William S. Preston, esquire, and though his performance offers the most bubbly enthusiasm in the movie, it’s no secret that Winter went on to a quieter, more obscure career, and never had the same opportunities to further remove himself from his now most famous character – at least certainly not when compared to his juggernaut on-screen companion, one Keanu Reeves, burdened with an audience’s morbid curiosity to see if the actor, who went onto a decidedly less-comedic career that focused on action, dark thrillers, and dramas, could somehow re-embody the character who birthed a thousand memes. For the most part, Reeves is just as successful in re-finding the “whoaaa!” of Ted Logan, bringing to life a middle-aged mimbo with small dreams and little want in life, but his performance is occasionally hampered by an unintended melancholy that comes from his character’s very rare descent into glee. Simply put, Ted’s forgotten how to smile, and in a concept for a sequel that’s already surreal in the sense that it exists at all, it makes some of the sequel’s events feel just the least bit off.

Typical in these many-years-later sequels, Bill and Ted have multiplied, each having a daughter with their princess wives. Thea (Samara Weaving) and Billie (Brigette Lundy-Paine) are the spitting images of their fathers, each adorably named after her honorary uncle and each as equally obsessed with the perfect rock and roll sound. They’ve nailed the brain-dead surfer delivery, with Lundy-Paine’s take on Reeves’ Ted especially spot-on, but thankfully, though their daughters are pivotal in the central conflict, this is by no means a passing-of-the-torch kinda sequel. Bill and Ted are still very much our heroes, even if they’re sharing the stage this time.

Regardless of this new generation, however, let it not be said that BILL & TED FACE THE MUSIC lacks the touch of the original band. Series writers Chris Matheson and Ed Solomon return to write their third Bill and Ted saga together, which resurrects as many surviving characters as possible from the previous movies, from Death’s William Sadler (who is a blast) to Ted’s father Captain Logan (Hal Landon Jr.) and Bill’s (former) stepmother, Missy (Amy Stoch). George Carlin’s Rufus is missed, but proper tribute is paid, and his daughter, Kelly (Kristen Schaal), takes on his watchful guardian duties with a goofy sincerity that fits her personality as well as her character. It would also be an understatement to say that BARRY’s Anthony Carrigan as “Dennis,” the time-traveling assassin robot, absolutely steals the show every minute he’s on screen, shaving off the biggest laughs with a silly subplot that shouldn’t really work but always does. 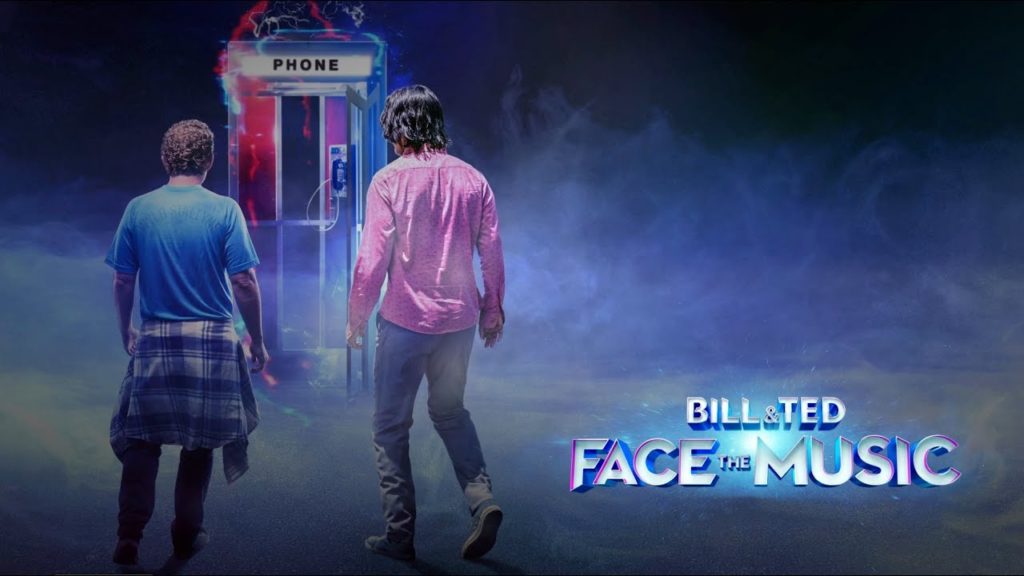 The greatest thing to be said about BILL & TED FACE THE MUSIC is its total and complete lack of anything involving cynicism, whether with itself or about the world in which it takes place. Because of this, it feels like an antidote for the ugliness and despair to which our world has fallen victim for the better part of the last decade. Except for a more grandiose representation of “the future,” which relies on visual effects that weren’t available during the previous Bill & Ted days of yore, BILL & TED FACE THE MUSIC resurrects everything about the series you remember it being. Bill and Ted are still friends, still jamming, still unconcerned about the state of their futures…that is until their next round of time-traveling adventures begin. Only then are they faced with a bevy of alternate futures where their musical careers crash and burn, where they are estranged from their families, and where they have failed to write the ultimate song that will unite the world. And if you’ll allow a brief detour into “no shit” territory, Bill and Ted aren’t just trying to save the entire world as we know it, but they’re trying to save themselves, too – from a present where their wives are close to leaving them, where they’re not eager to bear the burden of responsibility, and where they’re afraid to chase the dream they’ve been fated to obtain. For us, the audience, this is our in. This is what allows us to connect with our characters. And this is what gives BILL & TED FACE THE MUSIC its heartbeat. When we catch up with Bill and Ted a mind-boggling 29 years after the events of BOGUS JOURNEY, they’re not living the life you’d written for them in your heads. Based on what we know about these two lovable boobs who do nothing but Chauncey Gardiner their way through life, we expect them to be sharing a crappy two-bedroom apartment with pizza boxes and beer cans all over the floor and possibly getting fired at the same time over the phone because they work the same shift at the same job for which they failed to show up on the morning we’re finally catching up with them. But no, they’re actually living next door to each other in a nice-looking, middle-class development in a nice-looking, middle-class cul-de-sac. They drive plain cars, contend with plain problems, and lead plain lives. They, by god… look like us, and maybe because they are – well-meaning boobs with the responsibility for uniting the world, finding the common good in us all, celebrating the purest moments of life, and embracing all that which binds us in time. This is what we should all be doing, time-traveling phonebooths notwithstanding, and it took a couple of middle-aged doofuses to show us the way.

Much is made about the plot/conflict of BILL & TED FACE THE MUSIC – of Bill and Ted’s task to write the ultimate rock song that will unite the world – but for those viewers like me who respond much more emotionally to the ravages of time, both in real life and when reflected in properties that were major parts of childhood, it’s the pensiveness, the acknowledgement of lives lived, and the choices we can still make while we have the time that hits me in the feels the hardest. Maybe I should be ashamed or embarrassed that my eyes welled with tears not once but twice during this long-awaited BILL & TED 3, but I’m not. Frankly, it’s the perfect movie for 2020, because it’s stuffed to the brim with everything our hearts needed: proof that we can, indeed, go back to the things from our youth and discover they are just as special as they ever were; an injection of goodness, hope, light, and a sense of community that’s been harmed and abused by a growing ugliness based on political differences; and finally, an escape into a world where two not-so-bright dudes can, against all odds, save the world. And in a time where it feels like we have more reasons to fear life than to celebrate it, well, that’s most triumphant. 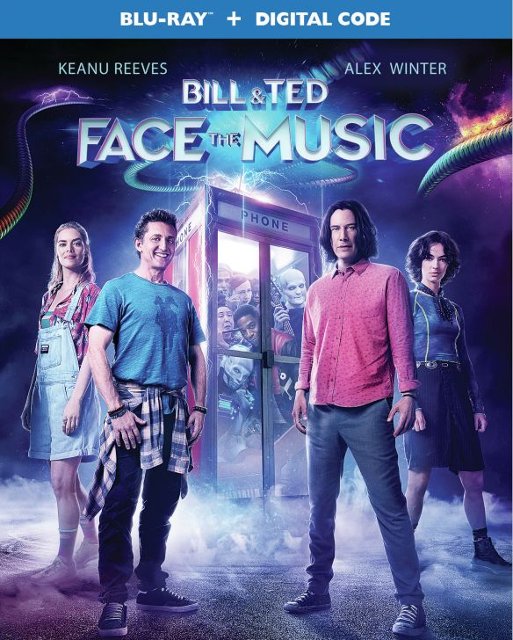 BILL & TED FACE THE MUSIC is now available on Blu-ray and DVD.